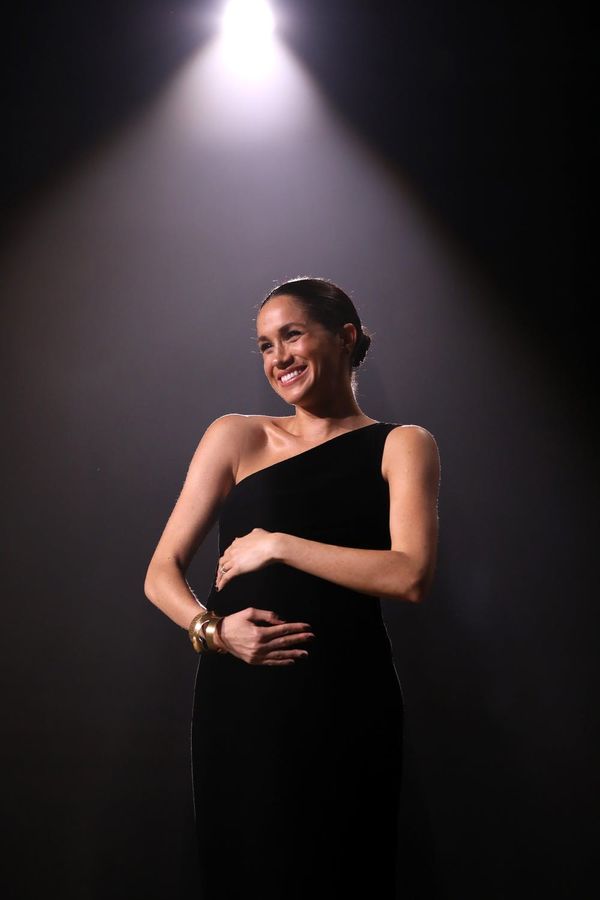 Meghan Markle never ceases to amaze us. The Duchess of Sussex, who announced her pregnancy with Prince Harry in October, shocked everyone when she made a surprise appearance at the British Fashion Awards at Royal Albert Hall in London on Monday, December 10.

She attended the glamorous event to honor Clare Waight Keller, the artistic director of Givenchy, with the prestigious British Womenswear Designer of the Year award. It’s absolutely fitting that Markle played a major role in the ceremony to celebrate the work of Waight Keller. After all, the designer is responsible for creating one of Markle’s most important looks: that unforgettable wedding dress.

Naturally, the Duchess of Sussex, while cradling her baby bump, looked radiant at the ceremony in a sleek one-shoulder black Givenchy gown, complete with gold Tamara Mellon heels and coordinating statement cuffs by Pippa Small.

“As all of you in this room know, we have a deep connection to what we wear,” Markle said on stage. “Sometimes it’s very personal, sometimes it’s emotional. But for me, this connection is rooted in really being able to understand that it’s about supporting and empowering each other, especially as women.”

The Duchess continued, “When we choose to wear a certain designer, we’re not just a reflection of their creativity and their vision but we’re also an extension of their values of something in the fabric, so to speak, that is much more meaningful. I recently read an article that said the culture of fashion has shifted, from one where it was cool to be cruel, to now where it’s cool to be kind,” Markle said of Waight Keller. “She has incredible kindness, which is why, when I met her 11 months ago, I knew we’d be working very close together.”

Waight Keller continued to thank Markle for trusting her to design her famous wedding gown. “I got to know Meghan on such a personal level,” the British designer said. “To have someone like that trust you in an incredible moment in their life is something that is just the most unbelievable honor. I can’t thank you enough because it was the most beautiful moment.”

What do you think of Markle’s black gown? Let us know @BritandCo!

Bobby Schuessler
Bobby Schuessler is a contributing fashion writer at Brit + Co and has contributed to Who What Wear, Refinery29, Lucky, Glamour, Out, Nordstrom, and Barneys New York. When he's not writing about style and shopping, you can find him catching up on the latest Housewives franchise and sipping his go-to drink, a vodka martini with a splash of cranberry and a twist.
Celebrity Baby
Celeb Style
Celebrity Baby Celebrity Style Royal Baby Royal Family
More From Celeb Style