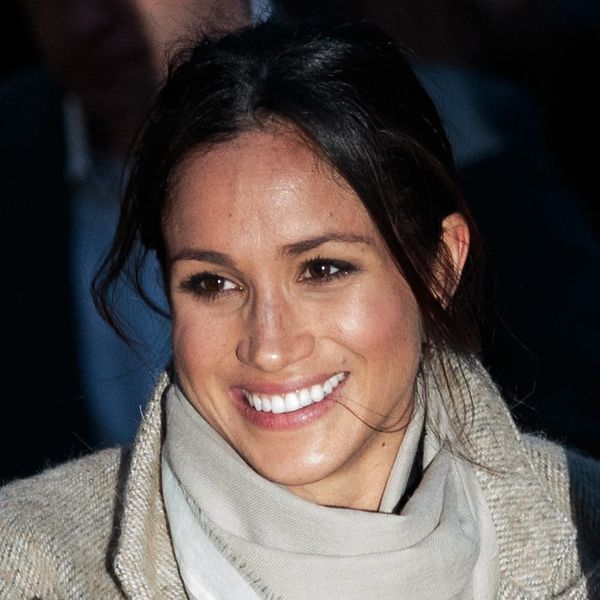 It’s a New Year, which means plenty of new stylish ensembles for our fave young royals, Kate Middleton and Meghan Markle. Prince Harry and his bride-to-be made their first public appearance of 2018, while they both looked seriously fashion-forward, Markle’s ensemble was a rather unconventional one for a soon-to-be member of the royal family, breaking from tradition in a big way.

The couple was on hand at local radio station Reprezent 107.3FM in Brixton to learn how the station is using music and media to influence young people in a positive way. Markle, 36, bundled up for her arrival in Smythe Brando camel collared midi coat ($995) with an hourglass silhouette and a coordinating Sara Sewn-On Fringe Scarf (unavailable, roughly $93 USD) by London-based brand, Jigsaw, keeping her hair swept back in a simple messy low bun.

It was the outfit she wore underneath, however, that had royal experts’ eyebrows raised. Once the twosome made their way inside, she removed her jacket to reveal a black Marks & Spencer Autograph wool sweater ($75, currently unavailable) with a round-neck and bell-sleeves, black Burberry Wyhill wool flared pants ($195, unavailable), and black Sarah Flint Jay Flint 100 pumps ($395), and the color was definitely noteworthy.

As Meghan’s Mirror editor Christine Ross told E!, the all-black ensemble was a pretty serious departure from the norm. “Meghan is already showing us that she is carving her own path as a royal,” she said. “She is pushing the royal envelope with her style choices. Royalty almost never wears black, except for somber occasions (royal family members are required to travel with black clothing in the case of a sudden death), so today’s look was a surprise for royal watchers. The no-black rule is followed by every major royal woman around the world. Meghan looked very chic and professional, but I don’t imagine we will see much more black after the wedding.”

Talk about a fashion rebel!

Do you love Meghan’s first public outfit of 2018? Let us know @BritandCo.

Arielle Tschinkel
Arielle Tschinkel is a pop culture junkie who went to NYU because the Olsen twins went to NYU (really). She is a freelance writer whose work has also been featured on HelloGiggles, Refinery29, SheKnows, Bustle, Hollywood.com, and many others; and she's living her dream one Britney Spears GIF at a time. Follow her on Twitter @mrstschinkel or visit her website at arielletschinkel.com.
Celebrities
Celeb Style
Celebrities Celebrity Style Coats Meghan Markle Style Royal Family Royal Style
More From Celeb Style