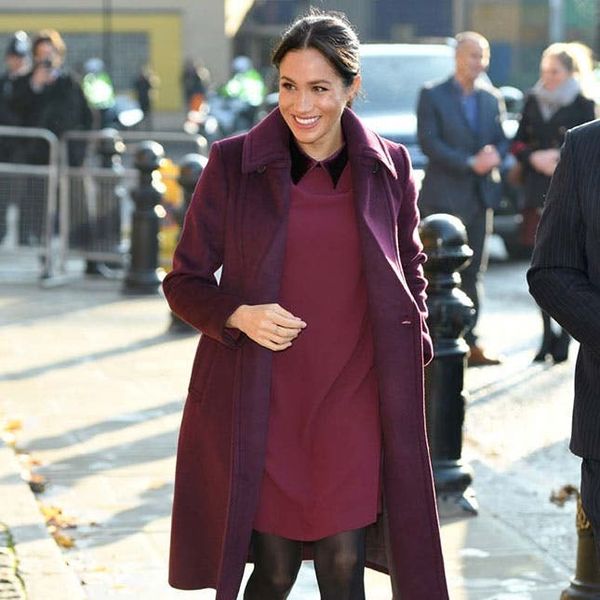 From an actress to a duchess, Meghan Markle has the fashion universe in the palm of her hands. And though she has easy access to any designer she wants, Markle frequents a handful of go-to brands when she wants to turn heads during royal duties. The range of labels — including many British and American-based lines — is a treasure trove of workwear essentials that master timeless and polished style. Ahead we’re showcasing six of Markle's favorite fashion brands that seriously work for your nine-to-five.
Club Monaco: For classic staples that elevate any look, Markle hits up NYC-based brand Club Monaco. Here, she wore a sleek burgundy coat in November while visiting the Hubb Community Kitchen in London. (Photo via Karwai Tang/Getty)
This multi-colored pleated dress by Club Monaco was so fitting for a wedding she attended with Prince Harry in August. (Photo via Antony Jones/Getty)
Mother Denim: These distressed skinny jeans by LA-based denim line Mother were the highlight of this famous Markle look she rocked pre-engagement to Prince Harry in September 2017. (Photo via Karwai Tang/Getty)
The Duchess of Sussex turned to Mother again for cool black skinny jeans, which she wore with a blouse and a white blazer while at the Invictus Games in Sydney in October. (Photo Karwai Tang/Getty)
Strathberry: Known for sophisticated satchels, this Scottish accessories line has become a staple for Markle. We fell in love with this polished top-handle bag she carried to a charity event in December 2017. (Photo via Max Mumby/Getty)
This green Strathberry crossbody bag complemented Markle's plaid coat while she visited Edinburgh Castle in February. (Photo via Chris Jackson/Getty)
Aquazzura: While Markle steps out in a variety of footwear brands, she consistently wears stilettos from Aquazzura. Of course, this nude pair became an instant must-have when she donned them for her engagement announcement on November 27. (Photo via Anwar Hussein/Getty)
You can never go wrong with a pair of timeless black stilettos like Markle wore to the opening of the "Oceania" exhibit at the Royal Academy of Arts in September. (Photo via Max Mumby/Getty)
J.Crew: We love that Markle mixes affordable brands into her royal wardrobe, including everyone's brand for essentials, J.Crew. In fact, one of her most well-known outfits featured this navy-and-white coat that sold out almost immediately. (Photo via Max Mumby/Getty)
Markle also went to J.Crew to accessorize with a clutch while attending the Sentebale ISPS Handa Polo Cup in July. (Photo via Karwai Tang/Getty)
Sarah Flint: Another tried-and-true shoe brand for Markle, this celeb-approved brand offers a range of footwear silhouettes we all want to wear, including these pumps the Duchess of Sussex wore at an event at Hyde Park Corner in April. (Photo via Max Mumby/Getty)
Markle opted for a set of strappy flat sandals by Sarah Flint while on her tour in Australia with Prince Harry in October. (Photo via Chris Jackson/Getty)

Which of these looks do you love? Tweet us @BritandCo!

Which of these looks do you love? Tweet us @BritandCo!

Bobby Schuessler
Bobby Schuessler is a contributing fashion writer at Brit + Co and has contributed to Who What Wear, Refinery29, Lucky, Glamour, Out, Nordstrom, and Barneys New York. When he's not writing about style and shopping, you can find him catching up on the latest Housewives franchise and sipping his go-to drink, a vodka martini with a splash of cranberry and a twist.
Meghan Markle Style
Celeb Style
Meghan Markle Style Office Style Royal Style Work