How to Dress Like Meghan Markle Without the Royal Budget 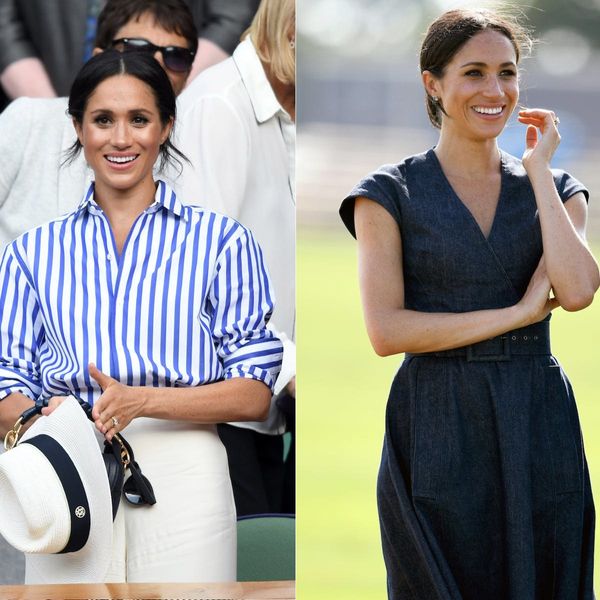 In the months since she officially joined the royal family, Meghan Markle has become a tried-and-true royal fashion icon. The former Suits actress has shown a penchant for mixing bold solids, midi hemlines, and boat- neck collars for a timeless style that is seriously covetable. What's also covetable? Having a personal stylist (her pal from her Hollywood days, Jessica Mulroney), and a sizable royal wardrobe budget. For those of us who love Markle's look but don't have the same funds, here are 15 budget-friendly looks inspired by the Duchess of Sussex.
Halogen Drape Detail Top ($79): For one of her first visits to Cardiff (when she was still a fiancée), Markle wore a Theory Welsh-checked top that originally retailed for $495. Score the same look for a fraction of the price! (Photo via Geoff Pugh/WPA Pool/Getty)
Sézane Simone Wallet ($160): As you know, the clutch is a must for any royal. We can totally see Markle carrying one just like this one — and the best part is that it doubles as a wallet. (Photo via Max Mumby/Indigo/Getty)
Express Stripe Full Button Up Shirt ($60): For her first one-on-one outing with sister-in-law Kate Middleton, the 37-year-old opted to wear a classic blue and white striped shirt by Ralph Lauren and a pair of white trousers in her favorite wide-legged cut. This blue and white shirt from Express is also casual cool, and on sale too. (Photo via Karwai Tang/WireImage)
H&M Fitted Blazer ($35) and Suit Pants ($30): Markle is also a fan of a well-tailored suit. She's worn the look on a number of occasions, and you can score your own for under $70. (Photo via Paul Faith/AFP/Getty)
Sam Edelman Hazel Point Toe Heel ($120): An elegant stiletto pump is a staple in the royal's wardrobe. While HER blue suede shoes are from Manolo Blahnik and retail for $625, these lookalike Sam Edelmans will keep your bank account in the black. (Photo via Chris Jackson/Getty)
Zara Pleated Midi Dress ($70): The former actress also favors midi dresses for both formal and more casual occasions. This pleated midi from Zara is right up her alley and bears a resemblance to the Roland Mouret she wore on her visit to Ireland. (Photo via Pool/Samir Hussein/WireImage)
Topshop Sammy Court Shoes ($75): As a member of the royal fam, you certainly have to wear a lot of pumps. Markle owns a pair of Dior 'Dioressence' 100 Pumps in Blush Leather ($710), but these Topshop heels are literally a tenth of the cost. (Photo via Yui Mok/WPA Pool/Getty)
Bailey44 Boardroom Pants ($168): When this LA native wears pants, she gravitates toward those with a wide leg (though a skinny, tailored trouser is also in her repertoire). These Bailey44 pants are made from a lush, comfortable jersey that's versatile enough to go from office to happy hour. (Photo via Andrew Milligan/WPA Pool/Getty)
Lo & Sons Claremont Camera Bag ($298): While her days of crossbody bags seem to have dwindled, back when she was still Prince Harry's fiancée, Markle loved a good crossbody. For all fashion lovers who love photography, the Claremont is possibly the most stylish camera bag we've ever seen. Plus, the removable divider converts the bag into a roomy purse. (Photo via Karwai Tang/WireImage)
ASOS DESIGN Pleated Midi Tux Dress ($67): For her adorable nephew Prince Louis' christening, Markle turned up in an eye-catching olive green number by Ralph Lauren. While we certainly don't have any princely nephews, this pleated ASOS dress makes us feel like we do. (Photo via Dominic Lipinski/WPA Pool/Getty)
J.Crew Tie-Waist Shirtdress In Cotton Poplin ($98): On an outing with Prince Harry back in July, Markle wore a trench dress from her own closet by up-and-coming Canadian designer NONIE. While NONIE's version will set you back $840, J.Crew's best-selling version is less than $100. (Photo via Samir Hussein/WireImage)
ModCloth Fabulous Fit and Flare Dress with Pockets in Navy ($119): For the RAF 100 Ceremony in July, Markle chose a long sleeve black fit-and-flare by Dior. This ModCloth dress comes with a similar bateau neckline and... pockets. (Photo via Jeff Spicer/Getty)
Calvin Klein Double-Breasted Blazer Dress ($134): For a special performance of Hamilton for the charitable organization Sentebale, the newly minted royal chose a $595 tuxedo dress by Judith & Charles. This Calvin Klein mini is a great alternative. (Photo via Dan Charity/WPA Pool/Getty)
Rebecca Minkoff Bree Medium Top Zip Satchel ($295): Nowadays, the duchess is hardly ever seen without a top-handled purse — and it seems like every one she touches sells out immediately. She carried Naeem Khan's $1490 Zodiac clutch to the Queen's 92nd bday concert and a $1043 Chloe Pixie handbag to the 2017 Christmas church service. This Rebecca Minkoff choice is equally elegant and more on budget. (Photo via Neil Mockford/GC Images)
Connected Lace Capelet Dress ($89): On her first solo outing with grandmother-in-law Queen Elizabeth, Markle looked gorg in a cream-colored bespoke Givenchy capelet dress. Since we don't all have major fashion houses at our beck and call, this lace number is perfect for meeting the grandparents. (Photo via Neil Mockford/GC Images)