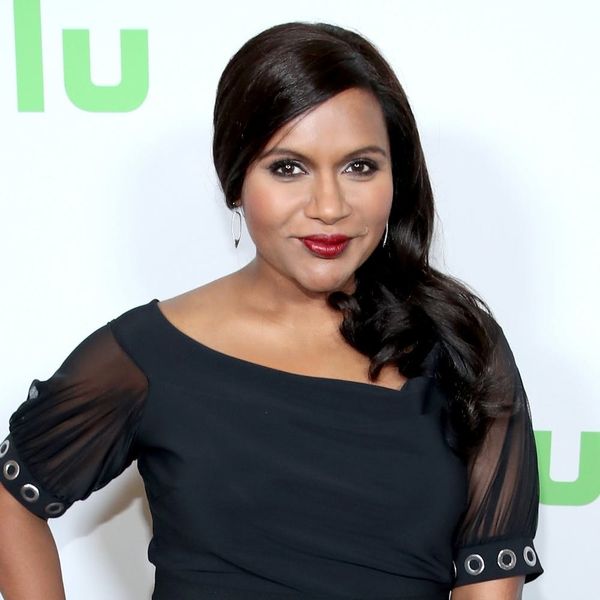 We’ve been on bump watch since last week, when Mindy Kaling was revealed to be expecting her first child. Our patience has finally paid off, as The Mindy Kaling Project star, who is five months along as she confirmed to Oprah, just made her post-pregnancy announcement debut on the red carpet at the Television Critics Association conference in Beverly Hills.

Kaling went the non-maternity route in a navy La Petite Robe di Chiara Boni Galena Dress ($750) with grommet accents that had all the hallmarks of her signature look: fitted, stylish, and full of fun details. The A Wrinkle in Time actress paired her ensemble with black Jimmy Choo sandals with embellished straps.

The 38-year-old also revealed that this season of her show will cover a hot button issue that two out of three mothers experience. “The episode is a little bit about mom-shaming, and that’s cool,” the mom-to-be quipped. “It was really fun, and hit a lot of those juicy-ripped-from-the-blogger-headline stories.”

What do you think of Mindy’s chic look? Tell us over @BritandCo.

Nicole Briese
Nicole is the weekend editor for Brit + Co who loves bringing you all the latest buzz. When she's not busy typing away into the wee hours, you can usually find her canoodling with her fur babies, rooting around in a bookstore, or rocking out at a concert of some sort (Guns N' Roses forever!). Check out all her latest musings and past work at nicolebjean.com.
Celebrity Baby
Celeb Style
Celebrity Baby maternity