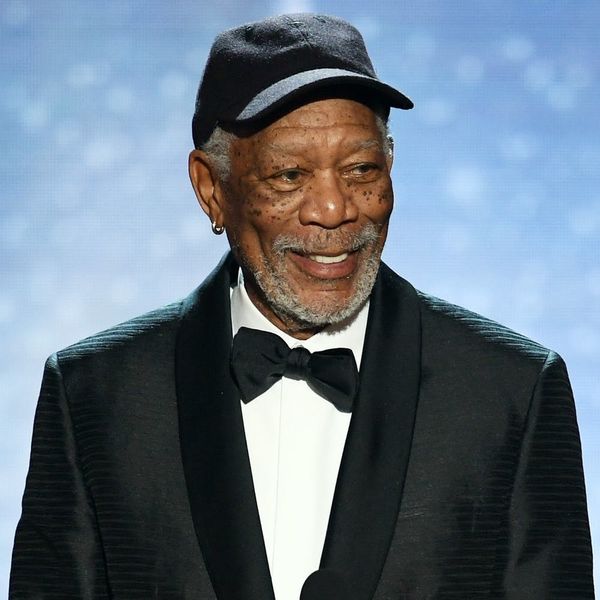 Morgan Freeman’s 2018 SAG Awards speech got a lot of people talking last night, not only because he called out the ceremony’s gender-specific statuette, but also because he interrupted himself to talk to someone in the audience. And now we know who that someone is.

For those who need a little refresher, when the beloved actor took the stage to accept the SAG Life Achievement Award last night, he began by saying, “These moments in your life—” But then he suddenly stopped.

Obviously distracted by a fellow actor sitting at a table in the audience, he paused his speech to address the person directly, saying, “Hey! I’m talking to you.”

When the individual (who couldn’t be seen by viewers at home) apparently questioned if they were indeed the one being singled out, Freeman answered softly, “Yeah. Hey!” Though a laugh could be heard off-screen, it was unclear if it belonged to the person involved .

The actor then added, “Okay, well, you just stand out. Okay, that’s all,” before starting his speech over again.

Seeing one side of the exchange was amusing enough, but we’re loving it even more now that we know it was Grace and Frankie star Lily Tomlin who had caught Freeman’s attention.

According to TMZ, the award winner revealed backstage that he’s never able to resist a greeting when he spots her. “She’s a wonder in herself and I’ve always loved her,” he admitted. As for the unexpected mid-speech conversation, he explained simply, “I see her, I say hello.” Makes sense to us.

What did you think of Morgan Freeman’s speech at the SAG Awards? Let us know @BritandCo!

Desiree O
Desirée O is a ‘Professional Bohemian’ who loves anything and everything related to the arts, entertainment, and pop culture. She ADORES being a ‘Newsy’ for Brit + Co, covering all of the latest tidbits of awesomeness that you want to read about. When she’s not writing, she’s either making messy art, going on long adventurous walks with her camera, or poking around over at bohemianizm (http://www.bohemianizm.com/). You can find out about Desirée O and her work at http://DesireeO.com/ or follow her on Twitter @DesireeO.
Awards Shows
Celebrity News
Awards Shows SAG Awards
More From Celebrity News