Morning Buzz: Holy Crap, Donald Trump Is the President of the United States of America + More 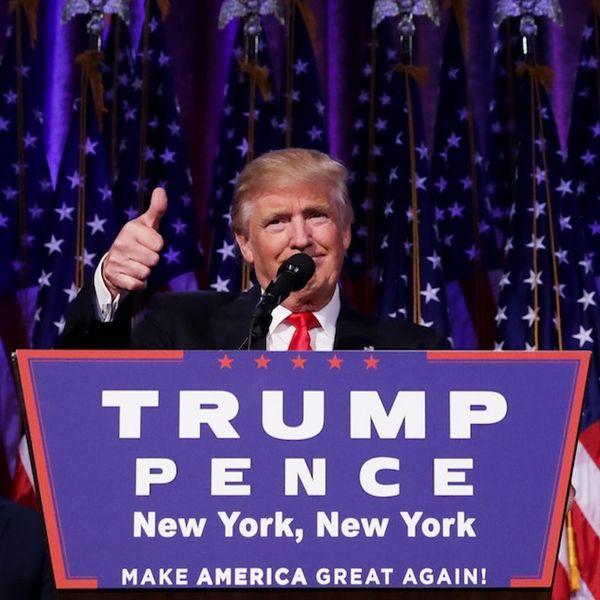 Check out some of the top election news below to start your morning.

1. In the early hours of the morning, in what many are calling an upset, Donald Trump beat Hillary Clinton to become the 45th President of the United States. His 276 electoral votes versus Clinton’s 219 were helped in large part by him clinching key states like Florida, Ohio and Michigan. At about 3am Eastern time, Trump gave his victory speech, beginning by thanking Hillary Clinton, saying she had called him to congratulate him and saying, “We owe her a major debt of gratitude for her debt to our country.”

This team has so much to be proud of. Whatever happens tonight, thank you for everything. pic.twitter.com/x13iWOzILL

2. Hillary Clinton did not give her concession speech in the immediate aftermath. At about 2am, Clinton’s campaign chair John Podesta took the stage at Clinton HQ and said Hillary would not be addressing the crowd until 10:30 today and that everyone should go home. “I want every person in this hall to know, and I want every person across the country who supported Hillary to know that your voices and your enthusiasm mean so much to her and to Tim and to all of us. We are so proud of you…I have to say this tonight: goodnight. We will be back, and we will have more to say. Let’s get those votes counted, and let’s bring this home. Thank you so much for all that you have done, you are in all of our hearts, thank you!” [h/t Vox]

Vlad (@vladgalbin) says, “Finally got my Canadian citizenship, 14 years after I landed in Canada, better late than never!” We tend to agree! #MyCitizenship

3. Meanwhile, Canada’s immigration website crashed during all of this. During the entire election, Americans have said they’d move to Canada if Trump got elected. Last night, it seemed a lot of people attempted to make good on their word, and the site crashed, giving a variety of errors. Of course there’s been no actual confirmation that an influx of American visitors caused the outage, but we’re gonna go ahead and stick with that guess. While it seems to be back up today, we gotchu just in case it goes down again: Read our actual tips on moving to Canada from an American who did it.

4. There were many historic firsts last night that we shouldn’t overlook, either! Hillary becoming the first female President of the US might not have happened, but six women DID make history last night. Bless Buzzfeed for this list: 1. Nevada elected Catherine Cortez Masto as the US’s first Latina senator. 2. California elected Kamala Harris as the first Indian-American to serve in the US Senate. 3. Florida elected Stephanie Murphy as the first ever Vietnamese-American woman in Congress. 4. Oregon elected Kate Brown as the US’s first LGBT governor. 5. Ilhan Omar is a former refugee and last night was elected as America’s first Somali-American Muslim woman legislator. 6. Vermont elected Pramila Jayapal and she is the first Indian-American woman to hold a seat in the US House of Representatives. Phew. We needed that. (Photo via Ilhan Omar/Facebook)

Do not sit still. Do not weep. MOVE. We are not a nation that will let HATE lead us.

5. Many of Clinton’s celeb supporters expressed their shock at Trump’s win. While many many of the tweets sent from celebs who were watching along last night showed simple, sad shock, like John Legend saying he felt “like America just sent in our tuition check for Trump University,” some chose to try to motivate their followers to stay strong and positive. “Do not sit still. Do not weep. MOVE. We are not a nation that will let HATE lead us,” Katy Perry said, while Madonna said “A New Fire Is Lit. We Never Give Up. We Never Give In.” complete with fire emojis, obvs. Laverne Cox had a powerful message, tweeting her mantra of “Awareness, Acceptance, Action. I am saying this acceptance prayer to myself as I fall asleep tonight.”

6. Quote of the day: “MICHELLE IF YOU RUN FOR PRESIDENT IN 2020 I WILL EAT ALL MY VEGGIES AND DO GREAT IN SCHOOL PLEASE.” This Twitter user joins many in already looking ahead to a #Michelle2020 campaign in the hopes that Obama will run for President then.

How do you feel about the election results? Let us know on Twitter @BritandCo.