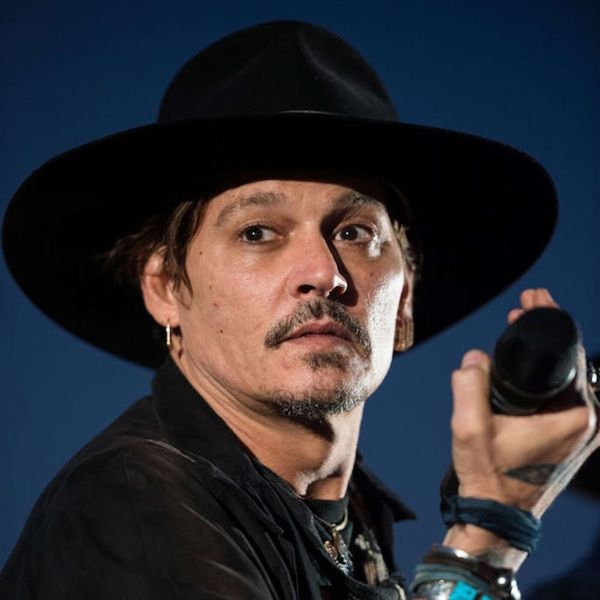 Johnny Depp faces backlash and Lauren Bushnell reveals someone surprising helped her through her Ben Higgins breakup in this morning’s top news stories. Check out those and more below!

1. Johnny Depp is causing some controversy with his confusing comments on Trump. During an appearance at the Glastonbury Festival, Depp talked American politics. “When was the last time an actor assassinated a president?” he said. “I want to clarify; I am not an actor. I lie for a living. However, it has been a while and maybe it is time.” Depp also said he knew that what he was saying was going to get a lot of attention. “It is just a question — I’m not insinuating anything. By the way, this is going to be in the press. It will be horrible. I like that you are all a part of it.” (h/t The Guardian; photo via Ian Gavan/Getty)

2. A popular French Instagram fitness model was tragically killed in an accident involving a whipped cream can. Burger’s family confirmed her death with an Instagram post that reads, “It is with great sadness we announce the death of Rebecca who died June 18th in an accident in the home.” The BBC reports, via French media, that she died of cardiac arrest after the incident. Burger’s family posted a photo of the type of canister she was using, claiming it exploded and struck her in the chest, and warned her almost 200,000 followers that many defective cans of its kind still remain in circulation. The unpredictable nature of Burger’s death has people (rightfully) shook, and fans posted comments of condolences and shock at her sudden passing. Our thoughts are with her family and friends in this difficult time. (h/t BBC)

3. Lauren Bushnell revealed that JoJo Fletcher reached out after Bushnell’s split from Ben Higgins.Bachelor couple Bushnell and Higgins have been open with the press about their recent split, with Bushnell even recently admitting that they’re on good terms and even still check in on each other. Following the breakup, Bushnell says that she also received an unexpected check-in from another Bachelor alum — Higgins’ ex/runner-up, JoJo Fletcher. “She reached out, which was really sweet,” Bushnell told Us Weekly. “Her and I talked before and I shared that we were having struggles. She texted me the day that the news or whatever broke just to check in, which I thought was really nice. We talked a little bit.” Look, as much as we love all the drama that goes down *on* the show, we love the Bachelor Nation ladies having each others’ backs IRL even more. (h/t Us Weekly; photo via Isaac Brekken/Getty)

4. Rachel Bilson says she’s open to an O.C. reunion, so let’s make this happen already, people! In a recent interview with E!, Bilson said that while she’s not exactly sure what the characters from the show would be doing in their 30s, she’d be down for a reboot. “I’m always open to things…it would be nice to see everybody again,” she said. The O.C. ended 10 years ago, and Bilson admitted that when people these days ask what her character Summer would be doing now, she can barely remember what she was doing when the show ended. “People always ask me that and I’m like, ‘What was she doing when we ended?'” she told E!. “I can’t even remember; it was so long ago. I’m sure she has kids with Seth. I don’t know! She’s on the beach.” Sounds about right. (h/t E! News; photo via Michael Loccisano/Getty)

[NEW!] MINIONS ARE INVADING MCDONALD'S! Don't tell your friends: these yellow-evil-banana loving creatures will be out in stores TOMORROW (8 June). . Besides the bananananana pie, there's also the super cute minion potatoes and get this: SPICY NUGGETS, all of them available in less than 24 hours! The minion potatoes are just 👌🏻✨! . Thank you @golin_global and @mcdsg for sending over these cuties! . #mcdgoesyellow #mcdonalds #minions

5. McDonald’s has released a Minions menu in some international locations. In advance of the release of Despicable Me 3, McDonald’s has put certain Minion-themed food items on its menu, including Minion-shaped potatoes (NEED THESE), spicy Minion chicken nuggets, a banana pie instead of apple, and more. The items have been available since June 8, but unfortunately for those of us in the US, they’re only available in Singapore, which is probably why we didn’t get a look at these li’l guys until now. Weird? Maybe. Amazing? 100 percent. (h/t Mashable)

According to Mayor DeBlasio today June 22, 2017 is Laverne Cox Day in the city of New York. WOW! Thank you so much Mayor and First Lady. I am beyond honored and grateful for this proclamation. #TransIsBeautiful happy #Pride. NYC enjoy Laverne Cox Day. Love and embrace who you are and celebrate and love each other!

6. Quote of the day: “Love and embrace who you are and celebrate and love each other!” Laverne Cox celebrates getting her own day named after her by New York City Mayor Bill de Blasio.

How do you celebrate who you are? Let us know over @BritandCo!