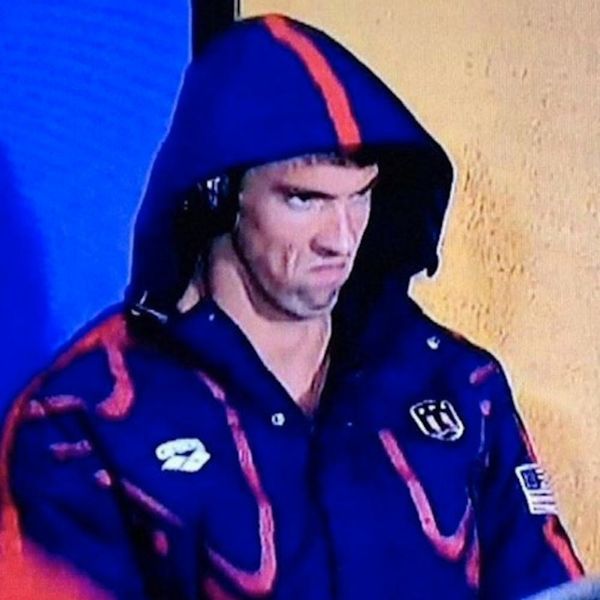 From the best Olympics lols to some important post-baby body positivity, check out six of today’s top news items below.

1. Shut it down, Olympics. Michael Phelps just won everything. Last night, as Michael prepared to compete in the men’s 200-meter butterfly semifinals, he sat in a corner with headphones on looking mad AF, occasionally glaring up angrily at his rival Chad le Clos. An NBC commentator called this is “energy conservation mode,” but we called it the best new meme of the Olympics. This face is a far cry from the happy, smiling face of his biggest fan.

There is no shame in gaining weight during pregnancy (or ever). There is no shame if it takes longer than you think it will to lose the weight (if you want to lose it at all). There is no shame in finally breaking down and making your own jean shorts because last summer's are just too dang short for this summer's thighs. Bodies change. Bodies grow. Bodies shrink. It's all love (don't let anyone tell you otherwise.) Peace xx #noshame #lovewhatyouhavebeengiven

2. Anne Hathaway is making her own jean shorts, thank you very much. Having just had her first son in March, Anne knows firsthand how bodies can change once you’ve gone through a pregnancy. In an effort to help normalize these changes and emphasize that every woman’s body and journey is different, she posted a pic on Instagram of some jeans being cut into shorts because they no longer fit properly. “There is no shame in gaining weight during pregnancy (or ever). There is no shame if it takes longer than you think it will to lose the weight (if you want to lose it at all),” she wrote. “There is no shame in finally breaking down and making your own jean shorts because last summer’s are just too dang short for this summer’s thighs. Bodies change. Bodies grow. Bodies shrink. It’s all love (don’t let anyone tell you otherwise).” Of course, if you want to go full Kim K and hustle for a pre-baby body ASAP, that’s fine too, if it’s your choice. But Anne’s message reminds women to set their own standards.

3. Leslie Jones has officially been invited to Rio to live tweet the Olympics. After everyone was living for Leslie’s hilarious live tweeting of the summer games, NBC officially invited her, calling her tweets “What good Twitter feels like.” Leslie couldn’t be more excited. “Ok packing I’m in the middle of watching Olympics so I might miss some stuff!!” she said. “You guys I’m gonna show y’all everything lmao!! Good and bad!! Hopefully it’s all good!! SO EXCITED!! USA! USA!”

Cause I'm keeping it real!! pic.twitter.com/dEicPTV6ts

4. Donald Faison just perfectly recreated this iconic Clueless scene. When Donald’s character Murray shaved his head in the ’90s teen classic, he traumatized his girlfriend Dionne (Stacey Dash), but he wasn’t sorry, saying, “Cause I’m keeping it real,” over and over to defend his bold move. In a new tweet where he’s shown keeping his shaved head trim, his caption reads — you guessed it — “Cause I’m keeping it real!!” Nostalgia overload!

5. This grandfather and granddaughter’s synchronized dancing to “Let It Go” is #goals. “We’re the best dancers!” the grandfather says. “We are!” the little girl proudly agrees. AWW.

6. Quote of the day: “I don’t believe in the kind of magic in my books. But I do believe something very magical can happen when you read a good book.” JK Rowling perfectly sums up why we’re happy to celebrate #NationalBookLoversDay today.

Do you have an all-time favorite book? Let us know on Twitter @BritandCo!