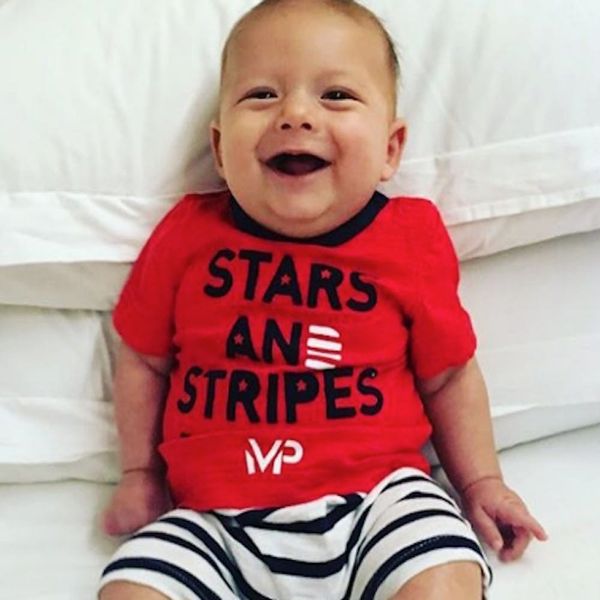 1. Michael Phelps might have won the gold, but it was his adorable son Boomer who truly won our hearts. As Michael took home the gold in the Men’s 4X100m Freestyle Relay yesterday, Boomer was seen sporting his patriotic best, cheering on his dad in the crowd, looking adorable AF. As if we weren’t already smitten enough with this father son team.

And then this just happened guys !! IT'S A BABY BOY !! 😀 Everyone in the Oliver family is very surprised and beyond happy. He arrived safely, mum / @joolsoliver was really really amazing, unbelievably composed, natural birth and my two eldest Girls got to come in at the very end as the baby was born which was amazing to witness very very emotional. 8 lbs ( that's 16 packs of butter for you bakers out there) anyway were all hitting the hay it's been a long day big love... bless a little baby boy Woop Woop !!!! And love to all you mums out there how amazing you are it blows my mind .... Big love jamie o p.s no baby names yet .......😜😎👍🏻😛🙂

2. It’s a boy for Jamie Oliver and his wife Jools! Jamie took to Instagram yesterday to announce the birth of their fifth child, a little boy who doesn’t yet have a name to share. “And then this just happened guys!! IT’S A BABY BOY!!” Jamie excitedly captioned the adorable pic. “Everyone in the Oliver family is very surprised and beyond happy.” Jools posted a sweet pic of her while nursing the new bundle, and says that the pair are “totally in love all over again.” Congrats to the Oliver family!

3. This jewelry tribute to Saint West is a pretty cute dad move, Kanye. We’ve seen Blake Lively celebrate her family through beautiful accessories, and we’ve seen Kim K rock a pretty adorable Nori necklace. Now Kanye’s getting on board with this adorable “Saint” necklace. Um, these aren’t even our kids and we want one.

4. Nicole Richie has some pretty wise words about parent shaming. Namely — don’t do it. Speaking with People, Richie, who is traveling with her kids and husband on the Vans Warped Tour this summer, shares some wisdom she learned early on in parenthood. “There’s not one way to raise children,” she said. “There’s no one right way to be a mother. It depends on your house and lifestyle. The biggest lesson I’ve learned is not to judge!” Amen! (Photo via Brad Barket/Getty)

5. Aly Raisman’s parents are the most emotional sports parents of all time. Watching the US artistic gymnast’s parents nervously watch her routine on Sunday night has became a new sport in and of itself. Lolz.

6. Quote of the day: “Time spent with a cat is never wasted.” — Colette

What’s your favorite quote for #InternationalCatDay? Let us know over @BritandCo!