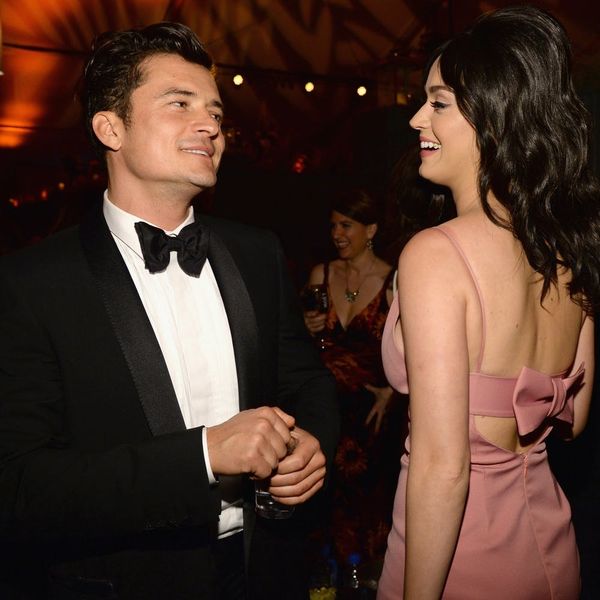 Nothing like a quiet romantic getaway — full of paparazzi. From Katy and Orlando’s, ahem, exposed beach trip to Kris Jenner’s car crash, here are six news items causing some buzz this morning.

1. Katy Perry and Orlando Bloom are looking adorable having a quiet and lovely getaway on an Italian beach — snuggling, relaxing, putting sunscreen on each other, paddle boarding — the works. It all seemed low-key until the New York Daily News published a series of photos in which Orlando decided to lose the swim trunks. While paddle boarding. With Katy sitting on the front of the paddle board just sippin’ away on a cold vacation beer. And the Internet lost its mind. While the naked photos of Orlando were censored with tasteful black bars, many immediately pointed out that the, ahem, shadow, was not. Do a quick Twitter search for “Orlando Bloom shadow” to get an idea of just how far people are taking the jokes — you won’t be sorry. At least he’s gonna even out his tan nicely.

I was not involved in the accident. Everything's ok ❤️ https://t.co/M90OyAza8c

2. Kris Jenner was injured in a car accident. Yesterday, the world’s favorite reality TV matriarch was driving her brand new white Rolls-Royce near her home when another car ran a red light and hit her. The damage to the front of the car looked pretty nasty, though Kris has since told E! News that while she is “shook up,” she’s otherwise fine (she might have a sprained wrist). Kylie, Kanye and Khloe all rushed to the scene to make sure Kris was okay, and Kylie even had to tweet to her concerned fans after being asked if she had been involved. WON’T SOMEONE THINK OF THE MOMAGERS?

@CaraDelevingne is no longer just one of the world's biggest models and the coolest girl in fashion (though she still is those things). She's now among Hollywood's most captivating breakout actresses. And she's an icon for legions of adoring fans who revere her extreme honesty. Pick-up a copy of ELLE's #SeptemberIssue on newsstands nationwide August 16, to read the entire story. Until then, go to ELLE.com for a sneak peek at what she had to say. || photographed by Terry Tsiolis for ELLE, styled by Samira Nasr #WeAreFashion

3. Cara Delevingne opens up about depression for an important reason. In the September issue of Elle magazine, Cara discusses exactly why she previously decided to speak up about her own struggles with depression, and the reasons couldn’t be better. “I couldn’t just sit there and listen to these girls, and boys, too, but usually girls, say this stuff, about bullying, about their sexuality, depression, and guilt and suicidal thoughts and just all of it, without being like, ‘I have been through that, and it’s going to be okay,'” she says. “If I can help a teenager go through a better time than they should be, then I am going to fucking do that. I mean, fucking being a teenager suuuccccks. And I somehow came through the other end.”

4. The man who created the “This Is Fine” cartoon dog meme updates it to reflect that things are toootally not fine. You’ve likely seen comic artist KC Green’s This Is Fine cartoon. You know, the one where the dog is sitting down for a cup of coffee as his house burns down around him but he doesn’t want to acknowledge it, so he simply tells himself everything is fine? It’s been used with increasing regularity throughout 2016 as world events become bleaker and bleaker, and so three years after the original, KC has updated it to reflect that things really are not fine, and it’s time to do something. He’s even launched a Kickstarter for an IRL plush version of the dog, since it’s “becoming all too relatable these days. Take the edge off and hug a boy.” (Image via KC Green/The Nib)

5. This Olympic gymnast who racked up a $5,000 phone bill playing Pokemon Go in Rio is all of us. After making his way to Sao Paulo for some pre-Games training last week, artistic gymnastics favorite Kohei Uchimura immediately racked up some serious roaming charges while catching Pokemon — almost $5,000 worth. As USA Today reports, he got extremely lucky when his provider agreed to waive the charges and put him on a flat daily data rate. How do we do that? (Photo via Ian MacNicol/Getty)

6. Quote of the day: “I laughed, like this is so silly… What day in age from that lyric do you get all of this information? Is it really telling you all that much, accusing people?” Songwriter Diana Gordon, who helped pen Beyoncé’s infamous “Becky with the good hair” lyrics, laughs off the reaction to the lyric that was about no one in particular.

Do you still think Bey had someone in mind when singing those words? Let us know on Twitter @BritandCo!