Morning Buzz! The “Pretty Little Liars” Finale Made the Cast Just As Emotional As the Rest of Us + More 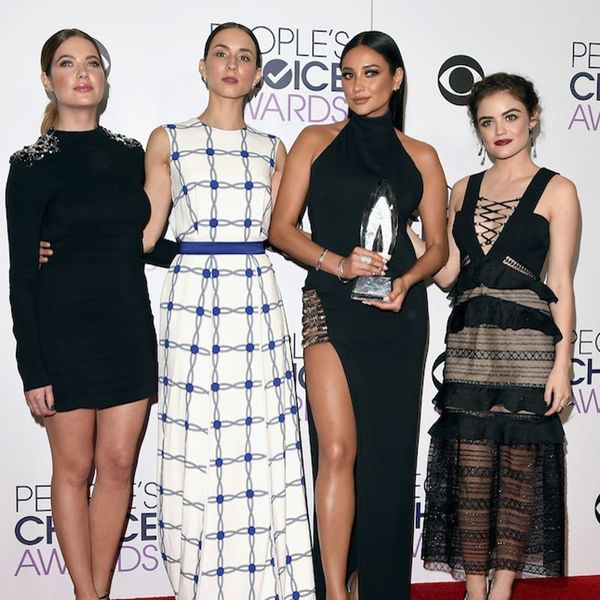 The Pretty Little Liars girls say goodbye and Twitter is freaking out over Rihanna’s mystery man in this morning’s top news stories. Check those and more out below in the Wednesday Morning Buzz!

The streets of Rosewood will always feel like home. I will hold each of these girls close to my heart always, as I will Emily. She changed me as a person and I will never be able to say thank you enough. Thanks to the cast, crew, and of course, the fans. The little show that could kept chugging along because of all of you and I am forever grateful for the impact you all have made in my life the last 7 years. So tonight, as we say our final farewell to Rosewood, I say the biggest thanks to all of you. 💋 #PrettyLittleLiars #PLLGameOver 😥

1.Pretty Little Liars ended a wild seven-year run with a fitting finale last night, and the cast of the show was just as emotional as the rest of us over its end. The show’s stars took to Instagram to share heart-wrenching memories and reflections and, well, we’re not crying, you’re crying! Shay Mitchell said her character Emily “changed her as a person,” Troian Bellisario said the show taught her patience and new skills, Lucy Hale’s throwback pic did the talking for her as she found herself speechless (“For me to be speechless says a lot.”), and Sasha Pieterse got uber mushy on her PLL family. Ashley Benson perhaps summed it up best by offering a heartfelt thank you to the fans. “I LOVE YOU GUYS,” she wrote to accompany her goodbye vid. “Thank you for coming on this journey with me and the rest of the cast for the last seven years. Without all of you watching every week none of this would’ve been possible.” No, PLL cast, thank YOU.

Me digging into Rihanna's business when I should be working pic.twitter.com/K3VDUssbI4

2. Twitter is freaking out over Rihanna’s mystery man. Amid rumors that Drake might have a new lady, his ex Rihanna was spotted smooching a new guy while on vacation in Spain this week. Once fans got a look at the pics, shared by the Daily Mail, they went into extra overdrive. While many shared gifs of what Drake’s reaction might be upon seeing the pictures, most fans were cheering for Rhi being happy, while also making it clear that they needed all the details, stat. (Same, TBH).

A wildfire in San Luis Obispo County, California, claimed Galecki’s ranch, with many other homes evacuated as the 1,500-acre fire raged through the area. Galecki hasn’t yet commented on the fire, but was luckily unharmed, with fans sending condolences via his Instagram comments. (h/t People, photo via Michael Loccisano/Getty)
Nicole Villeneuve
Nicole is an entertainment and lifestyle writer covering pop culture, news, and cool women doing cool things. She likes yard sales, MTV's Teen Mom, and putting too many memes in the group chat. She lives in Toronto.
Celebrity Wedding
Celebrity News
Celebrity Wedding Morning Buzz