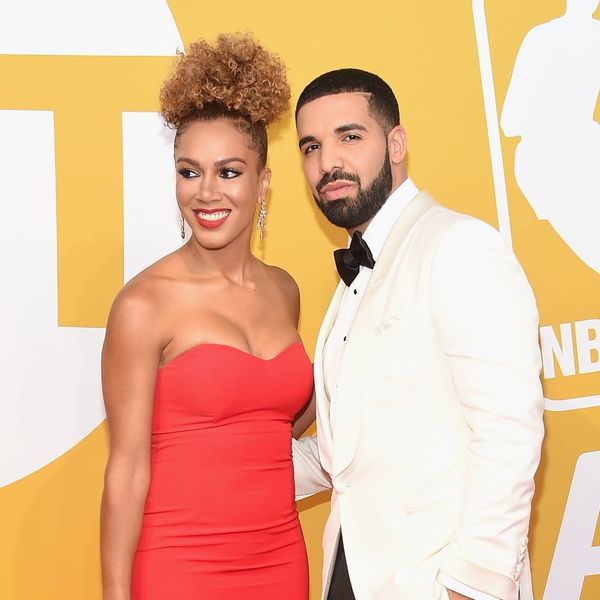 Does Drake have a new lady? That’s the very question that had tongues wagging when the 30-year-old rapper stepped out on the red carpet for the first annual NBA Awards at NY’s Pier 34 last night with a mystery woman on his arm: one Rosalyn Gold-Onwude.

Sparking instant relationship buzz, the gorgeous duo definitely stood out from the crowd, with Drake handling his hosting duties and Gold-Onwude holding her own among the familiar crowd.

While there’s no official word on whether or not these two are officially an item, we’ve got the deets on Drake’s date, from her Ivy-league background to her enviable basketball skillz.

According to People, Gold-Onwude is an NBA sideline reporter (most recently with the Golden State Warriors), who shares Drake’s half-Black/half-Jewish heritage. The fellow 30-year-old is a graduate of Stanford University where she not only studied, but played basketball, earning the title of Pac 10 Defensive Player of the Year with three trips to the Final Four (wow!).

And if you thought her current professional status was more than a little impressive, just wait until you hear about the Emmy she scored back in 2015, or the spot she landed covering the 2016 Rio Olympics! Gold-Onwude reportedly sees her role in sports journalism as just another step up the ladder, telling Bauce, “One of the biggest people I look up to is [Good Morning America anchor] Robin Roberts. She started in sports and transcended out. Maybe that’s something I could do one day.”

Still, there’s no doubt that basketball will always have a special place in the athlete’s heart, not only because she’s the kind of player who can take down Lebron James (in a dress, no less), but because it’s the very reason she met (possible current bae) Drake.

Friends since 2015, Drake was apparently feeling blue after his home team, the Toronto Raptors, lost a game, but was soon cheered up by the presence of Gold-Onwude. He even shared a pic of the pair at the time, along with the caption, “When the post game makes you forget about what happened during the actual game @rosgo21 😄.” Oh my!

“He’s a big time basketball fan, we’ve become friends through… just his passion for the game,” Gold-Onwude told Scoop B Radio. “So we met through that, and every time he’s around, it’s always fun, jokes, laughter… [It’s] been really cool to cultivate a friendship with him.”

As you’ll likely recall, Drake’s previous high-profile romance with J.Lo ended just as abruptly as it started, with the 47-year-old citing conflicting schedules for their split and moving on to ballplayer Alex Rodriguez. Perhaps it’s Drake’s turn to cultivate his own budding romance?

We sure hope so — these two are adorbs!

Can you see Drake and Rosalyn Gold-Onwude as a couple? Let us know @BritandCo!