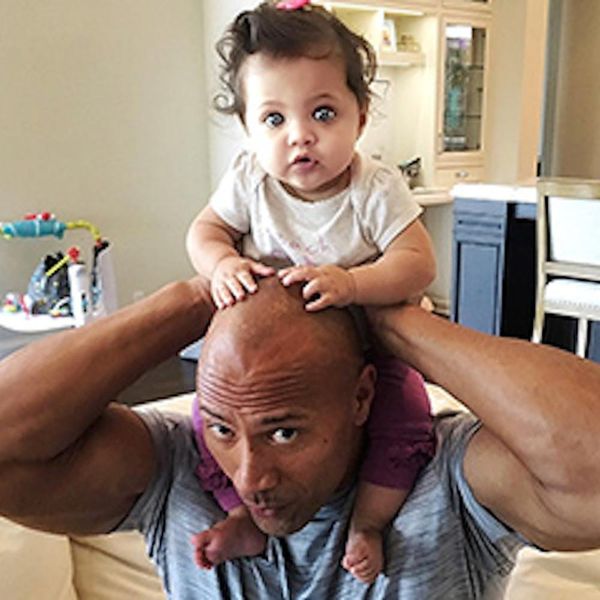 Happy back-to-reality Tuesday, everyone! From an adorable moment with The Rock to Malia Obama throwing *perfect* subtle shade, check out six of today’s top news items below.

1. This is one way to spend the Labor Day holiday — by having “philosophical” chats with an infant about the value of hard work. On Monday, The Rock posted a video to Instagram showing his *beautiful* baby girl Jasmine perched on his shoulders while he told her, “Baby girl, when you grow up, you get out there and dent the universe through hard work and sweat. And always make sure you do it in a positive way with class, dignity and respect.” She then responded by pooping on his neck. LOL. Well, let’s hope she absorbed even a tiny bit of that chat.

So the Mclean family wil be expecting a new addition to the family next spring!! #laborday! Ha get it "labor" day! I'm a goof! #avaisgonnabeabigsister #baby2! Keep u all posted!! We're so excited.

2. Backstreet Boy A.J. McLean and his wife announce they’re pregnant in the most adorable way. What, are they trying to build another pop group?! AJ and his wife Rochelle both posted an adorable pic to Instagram announcing the arrival of their second child. “So the Mclean family will be expecting a new addition to the family next spring!! #laborday! Ha get it “labor” day! I’m a goof!,” the former pop bad boy posted on Instagram. “#avaisgonnabeabigsister #baby2! Keep u all posted!! We’re so excited.” The reveal photo shows four different sizes of the same Air Jordan sneaker, so yes, go ahead and squeal. Congrats!

malia obama wore a "smoking kills" shirt. the level of pettiness is inspirational to us all pic.twitter.com/86pLXbctbI

3. Malia Obama threw the most epic subtle shade at her haters with this t-shirt. Back in August, the Internet had just a FIELD day when Malia Obama was smoking what appeared to be marijuana while attending Lollapalooza with friends. You know, just like a normal teen. This weekend, while attending the Made in America Festival, she wore a handmade t-shirt that said “SMOKING KILLS,” while also donning a cap for Harvard, where she’ll be going next year after a gap year. Malia? YES.

4. Are Harry Styles and Kendall Jenner dating (again)?! Harry and Kendall were spotted on holidays together earlier this year, but since, Kendall has been linked with Jordan Clarkson and A$AP Rocky. But a source tells People the two were spotted on a dinner date at LA hot spot Ysabel last week and that Kendall was “beaming.” Oh, young love!

5. An Australian restaurant has created the most epic tribute to the late Gene Wilder — in burger form. This is some crazy genius that Willy Wonka himself would be so proud of. Bar Luca in Sydney decided to honor the influential comedian with the The Beauregard Burger, a beef patty, tomato soup jelly, fried potatoes, “popping” cheese, blueberry onion jam and “Wonka Sauce,” all on a super psychedelic rainbow bun. Some orders will also come with a Golden Ticket for random prizes. We’ll take two, please!

6. Quote of the day: “You have brains in your head. You have feet in your shoes. You can steer yourself any direction you choose. You’re on your own. And you know what you know. And YOU are the one who’ll decide where to go…” Dr. Seuss and us hope you have a kickass first day back to school or work!

How do you like to kick off the unofficial first day of fall? Let us know over @BritandCo.