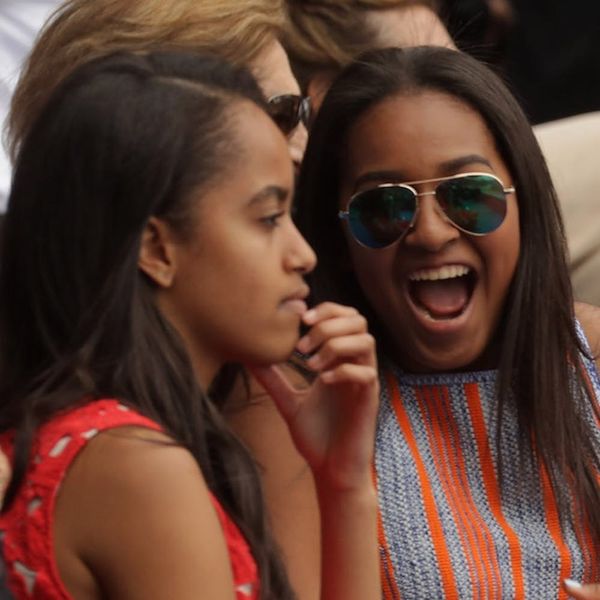 As the current US Presidential election hurtles on (and on, and on), one thing that becomes clearer is just how much we’re going to miss the Obamas. Not just Barack, either: Michelle’s poise and inspiring presence (and not to mention her infectious sense of humor) will be missed too. And, admittedly, we hope we can continue to get glimpses of Sasha, 15, and Malia, 18, growing up into amazing young women once they’re out of the White House.

YASS! Get it #MaliaObama! Can anyone guess what song I caught her vibing to at #lollapalooza?! See full video by clicking link in my bio! http://tiny.cc/jbyfdy

1. Malia went to a music festival and — GASP — danced. To MUSIC. This past weekend in Chicago’s Grant Park, Malia attended the annual Lollapalooza music festival with friends (as she has in years past, REMEMBER?), and over several days, was spotted various times in her summer best (crop top and shorts, duh) dancing to the music of Mac Miller and Bryson Tiller. This sounds like the summer experience of literally thousands and thousands of American teenagers, but some people took offense to seeing Malia at the fest. Was it just too normal? Were people scared to see a young woman so confident and unafraid of what they think? We may never know the truth, but we DO know that it looks like Malia had an amazing summer weekend. Awesome.

2. Sasha’s working that summer job grind. Even for the most powerful family in the world, we can’t say it’s a huge surprise that the youngest daughter is humble enough to take a summer gig working in food service — which is exactly what Sasha did. According to the Boston Herald, she’ll be working the takeout window at Nancy’s, a Martha’s Vineyard seafood restaurant that happens to be a family favorite. (Photo via Pool/Getty)

3. Sasha has Twitter. Last month during a campaign stop with Hillary Clinton, President Obama, in the process of pointing to Donald Trump’s Twitter etiquette as just one teeeeny tiny example of why he’s so controversial, he mentioned his daughter’s own habits. “Everybody can tweet, but nobody actually knows what it takes to do the job until you’ve sat behind the desk,” he said. “I mean, Sasha tweets, but she doesn’t think that she thereby should be sitting behind the desk.” The Obama daughters had previously been famously tightly monitored on social media, and so the Internet reacted accordingly (see: FREAKED). We’re inclined to think it’d be weirder if Sasha DIDN’T have Twitter.

4. Malia’s taking a year off before going to college. Oh, and she’s not just going to any college — she’s going to Harvard. Though Malia’s exact plans for the year aren’t known, taking a “gap” year is something Harvard actually encourages. “Harvard College encourages admitted students to defer enrollment for one year to travel, pursue a special project or activity, work, or spend time in another meaningful way,” according to school’s admissions office. Backpacking through Europe? Part-time retail job? Catch up on some Netflix? The world is yours, Malia.

5. They’ve grown into their personal styles. While we more frequently get to see the girls styled for public addresses or special events (for instance, at their first State Dinner, where they looked SO grown and sophistocated), it’s when we get glimpses of their personal looks that we really see how the two have grown into their individual selves. See: Malia at the aforementioned Lollapalooza, or Sasha looking chic and trendy at last year’s turkey pardon. Slay. (Photo via Chip Somodevilla/Getty)

6. They’re totally crushing on Ryan Reynolds. Remember when Sasha and Malia met Ryan at the aforementioned State Dinner, and this is what they did? SAME.

Malia Obama rocking that classic Pro Era tee! | Make sure you get your official Pro Era gear from theproera.com!

7. They post selfies on the Internet that their parents just don’t understand. Last year, the Brooklyn-based rap collective Pro Era posted a photo of what looked to be a Photobooth selfie of Malia wearing their gear. The world freaked out. Sorta like the Lollapalooza incident, the world didn’t freak out because this is 100000000% normal, even boring, teen behavior, but because the Obamas limit their daughters’ public Internet use and people wanted to know where it came from. A member of the rap collective said that a mutual friend of Malia’s and theirs had sent it to the group. We’re going to go ahead and guess that this sold them a lot of shirts.

8. Their dad loves to try to embarrass them. From publicly singing happy birthday at Malia’s 18th birthday to cracking cringe-y jokes at the podium, Barack loves to go full dad. And honestly, though it’s teen nature to roll your eyes, they seem to love it. Awww.

What’s your favorite Sasha and Malia moment? Let us know over @BritandCo!