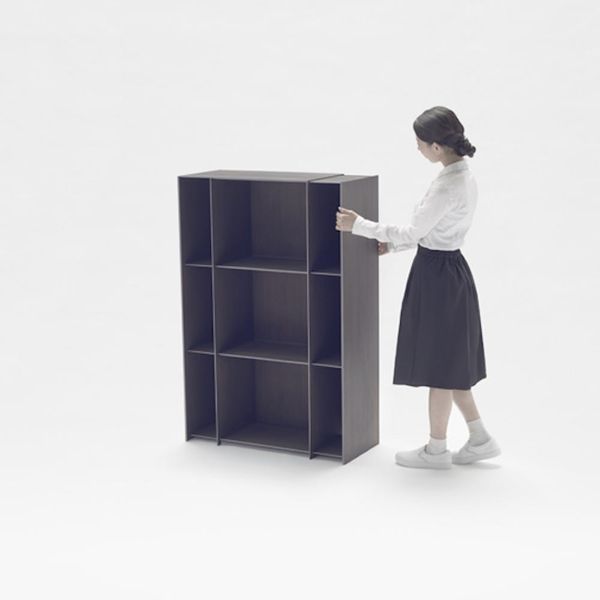 There’s a lot to be said for convertible furniture, especially when it comes to small spaces where every inch counts. But a designer named Sayaka Ito with the Japanese design firm Nendo has taken the concept a step further by coming up with a simple shelving system that expands and contracts like taffy, fitting literally any space in which it’s placed.

Having debuted with a warm reception at the London Design Festival this fall, the “Nest” shelf is made from vertical sections of carbon fiber and horizontal sections of aramid fiber-made honeycomb material that’s sandwiched between additional carbon fiber. Coated with a veneer made of larch, the shelf’s design basically hides additional shelving inside its own fibers. In its smallest state, the collapsed shelf is just over two feet wide. When it’s extended outward, it measures four and a quarter feet in width.

Fully extended, the unit forms a grid of four sideways rectangles, and while collapsing, it yields a customizable mix of rectangles and squares. As a result, if you want a wall-to-wall shelf in a small space like a bathroom or office nook, it’s as if you’ve had it custom-built. It’s only a concept piece for now, but we’re betting the demand for this clever, accordion-like piece of furniture will nudge it into production ASAP. Small-space dwellers, perk up, ’cause your sad storage situation is about to change.

What do you think of using carbon fiber manufacturing for expandable furniture? Spill in the comments below!

Amy Lynch
Amy is a freelance writer and editor, telling the stories of progressive people and projects that move the world forward. Her work has appeared on The Hairpin, Refinery29, Citygram and more, and she's developed content for the likes of Alternative Apparel, Milkshake and Silvercar. She lives, works and plays with her fiancé and their dog, Bogey, in the weird, wild heart of Austin, Texas.
Bathroom
Most Recent
Bathroom Furniture Home Office Small Space Living Small Spaces