30 Thoughts I Had While Watching Netflix’s ‘A Christmas Prince: The Royal Wedding’ 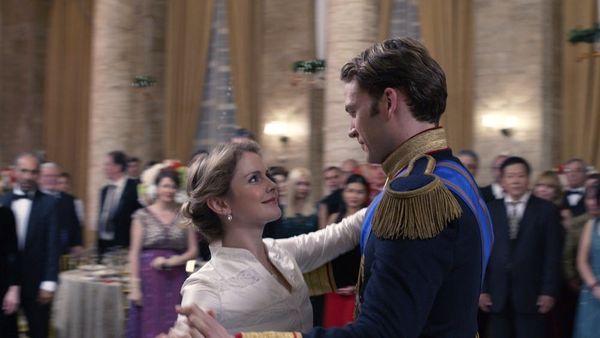 As December kicks off, we have officially entered the season the general public tends to refer to as “the holidays.” Personally, I call it “that month when it becomes socially acceptable for me to watch a truly exorbitant amount of deliciously terrible movies.” My top viewing priority this year: Netflix’s sequel to last year’s cinematic masterpiece A Christmas Prince. In A Christmas Prince: The Royal Wedding, Amber officially makes the move to snowy Aldovia to marry the country’s newly-crowned king, only to realize that life as a royal isn’t quite as casual as those Converse sneakers she loves so much. Here are 30 thoughts I had while spending another Christmas in Aldovia. Spoilers ahead.

1. What I wouldn’t give for Kensington Palace to allow Meghan Markle to blog.

2. Are you telling me the prince flies United?! Stars, they’re just like us.

3. I’m still not sold on Amber’s engagement ring, if I’m being honest.

4. Amber’s dad is me in the back of any Uber with snacks.

5. Amber, maybe you could have given dear old dad a brief on how to greet royals?

7. Cortney sure thinks this whole Sahil the “wedding designer” referring to himself in the third person thing is going to get old fast.

9. I’m getting some serious “Joe from Princess Diaries” vibes from Mr. Zabala.

10. Dear Santa, I would like Amber’s silk pajama situation, please.

11. Do you think Meghan Markle is vegging out in her new house with a face mask on, like, “Okay, Netflix, let’s see how you did.”

12. More Christmas stories like this insane Aldovian ogre fairytale, please and thank you.

14. Someone tell cousin Simon his hair does not look sexier pushed back.

15. Who knew that Richard’s father is Davos from Game of Thrones. This is certainly a crossover I didn’t see coming. (Photo via Netflix and HBO)

16. Princess Emily telling Simon, “I take offense to you,” is truly everything.

17. Okay, now THIS is a winter activity I can get on board with.

19. This toboggan scene weirdly feels like some kind of drug trip.

20. Amber has the most mom-like photo stance I’ve ever seen.

22. Honestly, I think Richard telling Amber to “keep calm and carry on” is the first time I’ve ever heard anyone use that saying in an actual conversation.

23. This stealth scene for the angry Christmas card seems… unnecessary? Does Amber really have to sneak into her own living room?

24. Amber’s incognito look sure looks a lot like me hungover on a Sunday.

26. Princess Emily, the royal hacker? I’m into it.

27. WE NEED TO TALK ABOUT THESE CAKE TOPPERS!!

28. Proposal for A Christmas Prince 3: It’s 15 years later and Emily and Tom are now the ones getting married. Someone feel free to pass along this pitch to the Netflix execs.

Cortney Clift
Cortney is the senior writer and special projects editor at Brit + Co. She typically covers topics related to women's issues, politics, and lifestyle. When she's not buried behind her computer you'll find her exploring New York City or planning her next big adventure.
Christmas
Streaming
Christmas Movies Netflix