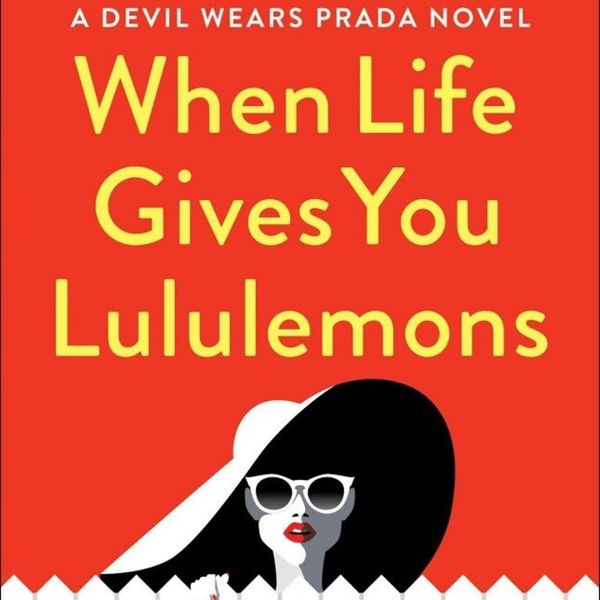 Whether you’re shopping for a literary graduation present for your bestie or trying to fill a few holes in your own personal collection, June is a fantastic month to stop by your friendly neighborhood bookstore (or do some late-night shopping on Amazon; we won’t judge). From a The Devil Wears Prada offshoot to a brave history of the first female computer programmer, here are 12 brand-new books that are begging to earn a spot on your bookshelf.

1. Us Against You by Fredrik Backman ($28): The highly anticipated sequel to the critically acclaimed Beartown, Fredrik Backman’s newest novel jumps right back into the small hockey-obsessed town that captured readers so intensely in his previous work. This time the town’s proud hockey team has fractured and disbanded, leaving all of its former players to join a rival neighboring team. With their only chance at a comeback resting on the shoulders of a newcomer, this unforgettable novel about the strength and bond of a tiny community will not disappoint.

2. Lincoln’s Last Trial by Dan Abrams and David Fisher ($27): It’s the summer of 1959, and young self-taught lawyer Abraham Lincoln is about to start his last murder trial before a historic run for President of the United States — a trial that happens to have him defending a close friend’s son from the charge of murdering a man who was Lincoln’s friend and mentee. As the trial begins to play out on the nation’s newspapers and Lincoln jockeys for an edge as a dark horse for the presidency, this dramatic historic retelling will have you on the edge of your seat (if you don’t already know the deets, we dare you not to Google it).

3. Florida by Lauren Groff ($27): This brave new short story collection by the bestselling author of Fates and Furies focuses on several women, often caring for very young children, as they navigate life, motherhood, and undeniable strife. Blending threats from the natural world with psychological contention, Groff’s latest collection is a welcome treat for anyone who is already obsessed with her extensive back collection.

4. How Hard Can It Be? by Allison Pearson ($28): 49-year-old Kate Reddy (the beloved heroine of I Don’t Know How She Does It) seems to have the perfect life: a beautiful home, two loving kids, and a good husband. But just as her sweet kiddos begin transitioning into teenage monsters, her husband Richard decides to quit his job and follow a path to enlightenment (AKA he starts drinking a lot of green potions, wears only Lycra, and spends all their money on his personal therapy). After joining a Women Returners group and writing a kickass resume, Kate manages to secure a job at the hedge fund she founded and support her fracturing family. But with trying to prove herself at her new/old gig, dealing with the melodrama at home, and facing off with the world, Kate must continuously remind herself that everything will, indeed, be okay. After all, how hard can it be?

5. Social Creature by Tara Isabella Burton ($27): Tara Isabella Burton crafts a tale of wicked obsession and an exquisite A Talented Mr. Ripley for the modern age. As Lavinia and Louise dream of all the places they’ll go together when they finish their stories and become famous writers, they begin to spiral into an intense toxic friendship in this chilling book that demands to be binge-read.

6. The Word Is Murder by Anthony Horowitz ($28): If you love modern-day retellings of classics, you’re going to want to get your hands on this stunning rendition of Sherlock Holmes ASAP. One curious morning in London, the wealthy mother of a famous actor enters a funeral parlor to plan her own service, and six hours later, she is found dead. With disgraced police detective Daniel Hawthorne on the case, Horowitz (AKA a fictional version of the novel’s author), who is documenting Hawthorne’s life for a ghostwriting gig, is immediately drawn into the middle of the action. With an unusual partnership blossoming, this age-old mystery is about to get an exciting new facelift.

7. When Life Gives You Lululemons by Lauren Weisberger ($16): We can almost guarantee you remember the first time your encountered ambitious and slightly insane Emily Charlton, first assistant to Miranda Priestly in The Devil Wears Prada. Now, Emily is a successful image consultant who just landed her dream client, but unfortunately, this client is taking city gal Emily to the suburbs of Greenwich. Facing new challenges with a girl power trio, this brand-new addition to the DWP series should definitely be on your summer reading list.

8. Who Is Vera Kelly? by Rosalie Knecht ($16): It’s time to say goodbye to the James Bond of yesteryear — this sharply written women-driven spy novel is about to be the new standard. It’s 1962 in New York City, and Vera Kelly is trying to make ends meet working nights at a radio station when she gets noticed by a recruiter for the CIA. Suddenly, she’s in Argentina, trying to infiltrate a group of student activists and wiretap a congressman. With betrayal, intrigue, and sexual awakening aplenty, Knecht’s latest novel will have you demanding a sequel.

9. Bearskin by James A. McLaughlin ($27): The first published novel from author James A. McLaughlin, this slow-burner is a must-read this summer. Rice Moore thought he left his troubled past behind him (betraying the Mexican drug cartels in Arizona) when he took a solitary job tracking wildlife and refurbishing cabins in a remote forest preserve in Virginian Appalachia. But when Rice starts to find bear carcasses on the grounds, he begins an obsessive hunt for the poachers that just might lead him down a familiar and dangerous path.

10. A Place for Us by Fatima Farheen Mirza ($27): Set to the backdrop of an elaborate Indian wedding, this family-driven narrative is rich with themes of belonging, identity, and cultural pride. As parents Rafiq and Layla try to understand their children (Hadia, who is choosing to marry for love instead of tradition; Huda, who wants to follow in her sister’s footprints; and Amar, their estranged son), the family will be tested like never before in the very first novel from Sarah Jessica Parker’s newest literary imprint.

11. Ada Lovelace by Christopher Hollings, Ursula Martin, and Adrian Rice ($35): If you’ve already watched and re-watched (or read and re-read) Hidden Figures a bazillion times, you’re going to want to pick up a copy of this badass woman’s biography PRONTO. Ada, Countess of Lovelace and daughter of poet Lord Byron, is often cited as the world’s first computer programmer. Using previously unpublished material, the authors take a nosedive into her ambitious and curious childhood, as well as her striking and famous partnership with Charles Babbage.

12. Old in Art School by Nell Painter ($26): Celebrated historian Dr. Nell Irvin Painter surprised everyone close to her when she announced that she would be returning to school in her 60s to earn a BFA and MFA in painting. Exploring her musings as a returning student as well as offering her enlightening take on the art world, this charming and frank book is a breath of fresh air and a beautiful reminder that it’s never too late to start a big new adventure.