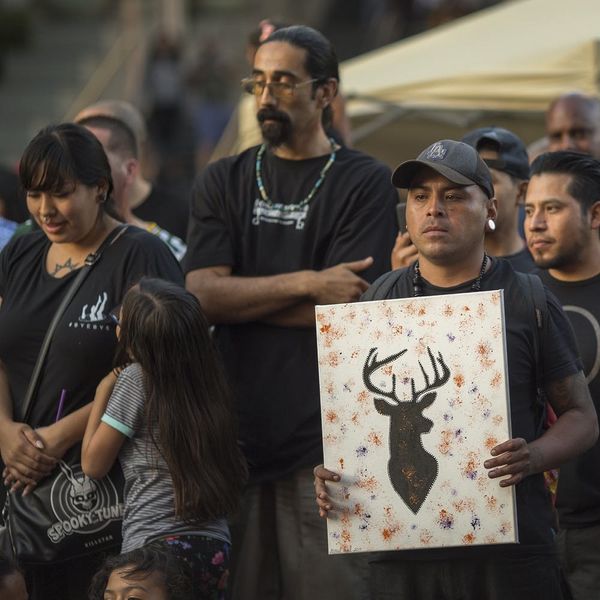 New Mexico has joined Minnesota, Alaska, Vermont, and South Dakota, as well as at least 60 cities across the country, in renaming Columbus Day to honor Indigenous people. House Bill 100 passed in the New Mexico legislature on Friday, March 29, and was signed into law by Governor Michelle Lujan Grisham on Tuesday, April 2.

“This day is an act of restorative justice for our Indigenous communities, and it is a time to reflect on our understanding of our country’s history, both the good and the bad,” said Democratic Rep. Derrick J. Lente, one of the bill’s co-sponsors. “New Mexico’s Nations, Tribes, and Pueblos are what truly make us the Land of Enchantment, and I look forward to the Governor signing this important bill so we can properly honor our indigenous communities.”

An estimated 12 percent of New Mexico’s population is Indigenous. The El Paso Times reports that 23 tribes reside in the state.

Sen. Benny Shendo Jr. said the shift to celebrating Indigenous people is needed to counter lessons many Americans are still taught in schools, which purport that Christopher Columbus “discovered” the Americas. Centering Columbus in American history minimizes the reality that the American continents and its surrounding islands were heavily populated with Indigenous communities long before Columbus’ arrival.

Some state senators oppose the name change, however. A number of New Mexico’s Hispanic legislators have argued that the decision erases the cultural influence of Spanish explorers in the Southwestern US, as per the Associated Press.

One senator said that changing the holiday’s name erases the Italian-American struggle by implying that Columbus “doesn’t matter.” Across the country, members of the Italian-American community have pushed back against Columbus Day renaming efforts, arguing that the holiday has served to commemorate the triumph of Italians in the US, in the face of ethnic discrimination.

Calls to rename or end the holiday began as early as the mid-1990s, according to The New York Times. In the interim, no Indigenous groups have asked that Italians — or anyone else — not celebrate their culture. Instead, they ask that all settlers (AKA non-Indigenous Americans) unlearn the history that makes Columbus out to be a hero, and not, as they say, the arbiter of a lasting legacy of suffering and destruction.

“For us, the bottom line is Columbus Day is just a celebration of genocide,” Roberto Borrero, the president of the United Confederation of Taíno People, told The Times in 2018. The Taíno people were the most numerous Indigenous population in the Caribbean before Columbus arrived in 1492. In less than 60 years, the community was all but wiped out by diseases introduced by Spanish colonizers.

From Your Site Articles
Kat Armstrong
Kat has been a writer, social media maven and mom for longer than she's willing to admit. She's also spent time in front of and behind the camera, interviewing celebs, politicians and acting as a producer for fashion and artistic photography shoots. When she isn't writing for various orgs and publications, she's hanging with her kids, husband and French Bulldog, Peter, in Toronto, Canada.
Inclusivity
Diversity
Inclusivity
More From Diversity