Guide to a Yachts of Fun Weekend in Newport, Rhode Island 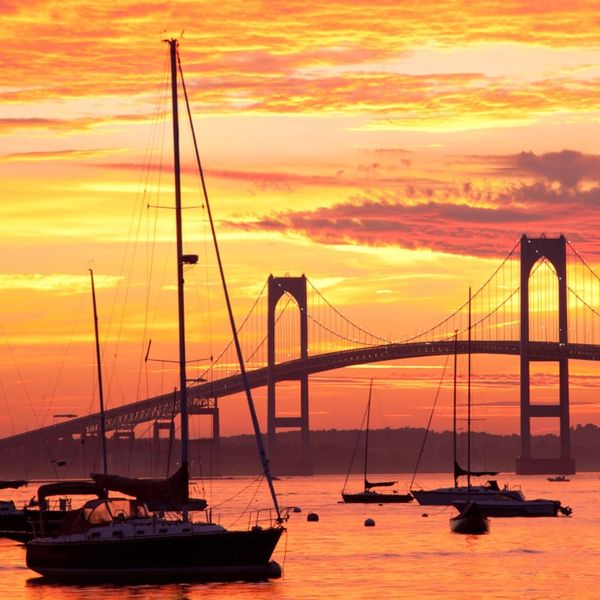 Home to both the Edith Wharton- and Henry James-type characters who inhabited the Gilded Age mansions along Bellevue and an endless assortment of old salts who’ve sailed north for the summertime, Newport is one of the nation’s premier resort towns. This seaside town in Rhode Island has been a popular destination for over a hundred years, and there’s a simple reason why: It’s yachts and yachts of fun.

But summer isn’t the only time to visit this sailing capital of New England, and you don’t have to be nautical by nature to appreciate its charms. Newport’s mixture of historic elegance and oceanic beauty is just as appealing in the off-season, but with the benefit of far less traffic. For this edition of carless weekend travel, we’re focusing on this Aquidneck Island hotbed of culture and adventure. Read on for your weekend guide to island living in Newport, and prepare to book your next trip to the Ocean State, because winter, spring, summer, or fall, this Rhode Island getaway has it all.

Getting There & Where to Stay

Only one hour from Boston and three hours from New York City (without traffic), Newport is accessible via train or bus from either East Coast capital. Since there isn’t a direct Amtrak train to Newport, New Yorkers should buy tickets to Kingston and call an Uber from the station.

When it comes to your final destination, consider perusing Airbnb for house rentals, especially if you’re looking to enjoy a group weekend with friends. You don’t just have to limit your search to Newport, however: Aquidneck Island also hosts the towns of Portsmouth and Middletown. Rentals in these towns can be fairly close to Thames Street (the hotbed of Newport nightlife) and are usually more reasonably priced. But if you’re set on room service — and a touch of luxury — then book a stay at Hotel Viking. Walking distance from the bars on Broadway and Thames, the ambiance of this historic hotel mirrors its surroundings.

Tucked away at the end of Ocean Drive is the swanky yet nautical Castle Hill Inn (pictured above). Serving up refined understatement as only New England can, this resort has become a favorite for weddings in recent years. But you don’t need to be engaged (or even put the deposit down for a room) to enjoy the spectacular view. Order a drink and recline on one of the Instagrammable Adirondack chairs on the property’s sloping lawn. Observe Newport’s premier form of traffic by watching the ships sail by (seemingly perilously close to one another at times). This congestion is infinitely better than a drive home down 95 South (hence the train recommendation), though that four-hour-long journey back to New York is certainly a rite of passage for the regular weekend visitor.

For the traveler not interested in spending money like a Vanderbilt, the Comfort Inn Newport and Newport Marriott are both ideally located accommodations. The Comfort Inn is right next to Flo’s Clam Shack and First Beach, while the Marriott is a short (and very idyllic) walk from the nightlife of Bannister’s Wharf — but more on these destinations shortly.

Finally, Newport may pride itself on being the anti-Hamptons, but a new 90-minute ferry service from Gurney’s Montauk to the resort’s Newport outpost has made traveling between the two destinations easier than ever. Stay at Gurney’s Newport if you have anxiety even thinking of one weekend away from the concerts and day parties at Surf Lodge (it even boasts live music).

Where to Eat & Drink

When it comes to Newport nightlife, there’s one spot that’s the center of it all: Clarke Cooke House, also known as “the candy store.” The three-story bar includes a midlevel for open-air cocktails, a raw bar, and live music, while the basement plays host to an underground nightclub (complete with videotaped dance floor where the projection hangs above the bar for patrons ordering drinks). If you’re feeling oh-so-fancy (and, like Iggy Azalea, you already know you are) then put on your best cocktail dress and try to get past the velvet rope to the Sky Bar on the patio. Tell your male friends to wear a jacket and tie or expect to do blazer pass-backs with guys who’ve already made it upstairs. (Photo via John Greim/Getty)

Located right next door to the Cooke House on Bannister’s Wharf, The Black Pearl‘s patio is ideal for sipping mudslides on warm nights. The indoor dining area is also perfect for a rainy day, where you’ll feel like you’re inside the cabin of a ship. The Landing on nearby Bowen’s Wharf is close in proximity to but lightyears more casual than the Cooke House. Another popular option is Dockside at Waite’s Wharf, known for its live music. Up on Broadway (the street where local bars reign), Pour Judgement is one of the best dives around. If you go on a balmy night, get involved with the games of ping pong that are always heatedly played before an assembled crowd.

Similar to The Black Pearl and the Cooke House, the Newport Lobster Shack is a great waterfront spot for dining on shellfish al fresco, though the environment is much more relaxed. Further down Thames Street, you can enjoy the inimitable Italian/seafood combination on the menu at Scales & Shells. The Brick Alley Pub is a favorite among locals (order the nachos, trust us). Look out for the whimsical signs and decor within; a personal favorite: Street Girls Bringing Sailors into Hotel Must Pay for Room in Advance.

Flo’s Clam Shack, next to First Beach, is iconic for its quahogs and fried seafood. Live large and order the hot dog and champagne lunch platter (you’re worth it). Finally, Ma’s Donuts in Middletown is the spot for delectably sinful pastries, while Newport Creamery is a local go-to for ice cream. Order the Awful Awful — we promise, it’s not so awful (in fact, it’s awfully delicious).

The sailing capital of the Ocean State should be on every ocean-lover’s bucket list, but even if you don’t typically consider yourself the seafaring sort, it’s imperative to get out on the water. A sunset sail on the Schooner Adirondack II is sure to appeal to yachtsmen and rosé aficionados alike — in keeping with Newport’s two favorite pastimes, sailing and drinking, drinks are served aboard the ship. And forget people-watching: The boat-watching in Narragansett Bay is not to be missed. Check out the sailing school fleet of Lasers and 420s tacking (and sometimes capsizing) in the wind, admire the regal hulls of meticulously restored sailboats, and gape at the mega-yachts (occasionally outfitted with helicopter pads for private jets, because, of course).

Go island hopping to the coves of Jamestown and the diminutive Goat Island, and enjoy the view from the fields of Hammersmith Farm (Jackie Kennedy’s summer home) to the sprawling oceanfront lawns, usually obscured by hedges and mile-long driveways. Another must-do for any first-time traveler to Newport is the Cliff Walk, a walking trail that winds along the coast from First Beach (and the mansions on Bellevue) to the sandy shores of Ocean Drive. Before the construction of the Pell Bridge, Newport used to be accessible only by boat. As a result, many of the mansions were built to face the sea, which makes the Cliff Walk a breathtaking peek at these grand facades (many of which remain privately owned, AKA not open to the public).

Of the three public beaches (First, Second, and Third are named for their proximity to downtown Newport), Second Beach, aka Sachuest Beach, is the “cool” spot for surfers and sunbathers, and there’s usually a Del’s Lemonade truck in the parking lot selling “Rhode Island’s Favorite Treat.” Third Beach in Middletown is more remote: The low-key atmosphere, with the boats anchored in the shallow waters near the shore, is reminiscent of Chatham Bars Inn on Cape Cod. While you’re in Middletown, commune with nature at the Sachuest Point bird sanctuary, and if the season permits pick pumpkins or apples at Sweet Berry Farm. The hydrangea bushes lining the farm’s parking lot provide the ultimate selfie backdrop, and their ice cream is equally spectacular.

The true Instagram fanatic should wake just before dawn, however. Newport may have beautiful sunsets, but we promise the best sunrise is on another side of Aquidneck Island, over the Sakonnet River in Portsmouth. Just down the street, Newport Polo is a classic afternoon activity: Bring a blanket and a bottle of wine, and admire the polo players and ponies galloping across the field.

If you’re over the beach, there’s hope for you yet: Go skydiving with Skydive Newport to discover a way to make even The Breakers — the 138,000 square foot Vanderbilt family summer home — look small. Rainy days call for shopping on Thames Street (visit Royal Male for all your English country style needs), movies at Jane Pickens (an opera house turned movie theater), and a visit to the International Tennis Hall of Fame (where you can also enjoy cocktails or grab lunch). But the ultimate rainy day activity is a mansion tour, for its intimate look into how America’s unofficial royalty used to holiday in Newport at the turn of the century. We recommend The Elms (for the ornate interiors), Rosecliff (iconic setting of the Grace Kelly film High Society) and Marble House (be sure to visit its tea house as well).

If you’re planning a trip in the fall, consider coordinating your visit with the Newport Wine & Food Festival, held in late September at The Elms, Rosecliff, and Marble House. In the summertime, Fort Adams is the spot for the annual Great Chowder Cook-Off, as well as the Newport Jazz Festival and the famous Newport Folk Festival. Rent a kayak or befriend someone with a boat to partake in the massive raft-up that occurs every July and August on the water right next to the main stage.

Or, better yet: Visit around the winter holidays, when the ancient homes come alive again. Imagine an insanely tricked out (yet sophisticated) winter wonderland — Christmas at the Newport Mansions runs November 17 to January 1, showcasing immaculately decorated Christmas decor in The Elms, Marble House, and The Breakers. A Winter Passport grants daytime admission to all houses open from November 18th to March for only $30. And if you need one more reason to visit in the colder months, February’s annual Newport Winter Festival features ten days of beach polo, live music, and all manner of revelry in a celebration deemed “New England’s Largest Winter Extravaganza.” It’s the perfect way to enliven the gloomiest of winter months.

What are your favorite places to visit in Rhode Island? Tag us in your go-to spots on Instagram.

Katherine Parker-Magyar
Katherine is a freelance writer focusing on travel, culture, lifestyle, and politics. Her work has appeared in The Week, Tasting Table, Elite Daily, POPSUGAR, and Electrify, among other publications. She's traveled to all 50 states and 40 countries, but calls New York City home. Follow along on Instagram at @katherineparkermagyar or visit her website at www.katherineparkermagyar.com.
Autumn
Travel
Autumn Carless Weekend inspiration Vacation
More From Travel