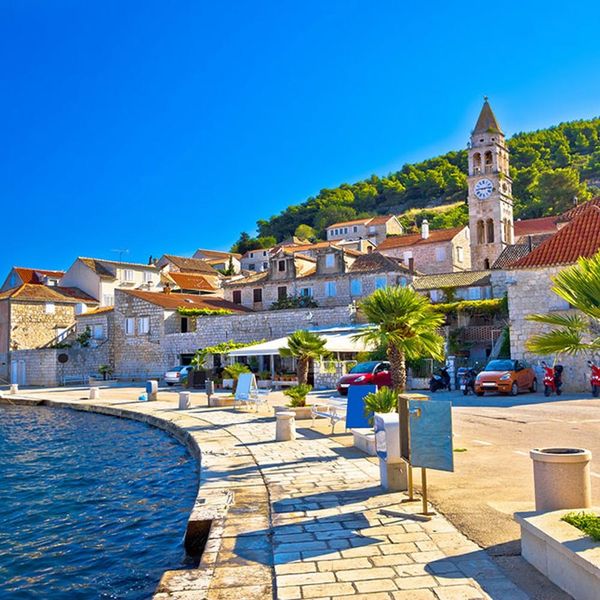 While we don’t recommend traveling just for the Instagram, you could do worse for a souvenir than epic vacay pictures with triple-digit likes. And with the weather heating up, there’s no travel destination better than those along the water. From the Sea of Japan to the coastal islands of Belize, here are the most Instagram-worthy seaside towns to visit this summer for all the moments you’ll want to share to get the most likes ever.

1. Kauai, Hawaii: It’s nearly impossible to resist oversharing on the picturesque Garden Isle of Kauai, so prepare to be unfollowed. You’ll feel like you’re in the wilds of Jurassic Park with Kauai ATV Tours, and you can create your own flower crown with Heavenly Hakus — your selfie will look like a real-life Snapchat filter. But for the ultimate shot, book a trip with Kauai Sea Tours for the Na Pali Coast. Any picture you take of that iconic coastline will be fit for the cover of National Geographic; the mountains do all the work for you.

2. Ischia, Italy:  Although only a short boat ride from the Amalfi Coast, the island of Ischia remains largely undiscovered. Capri’s lesser-known neighbor, Ischia is unique for its sandy beaches — the nearby Amalfi coastline is often rocky and usually crowded. Lounge on the private beach of Blumar and photograph the rows of cerulean umbrellas facing the Mediterranean for the perfect Gray Malin-inspired Insta.

3. Caye Caulker, Belize: Less crowded than fellow Belize isle Ambergris Caye, Caye Caulker offers endless photo ops for an island that’s only five miles long. Spend an afternoon exploring the mangroves on the northern side of the island, or snorkel the Belize Barrier Reef, the largest in the Northern Hemisphere. For a more leisurely experience, head to the Split, the narrow channel dividing the island, and grab a drink at the Lazy Lizard. End the day with a sunset sail and snap all those stunning pics.

4. Cyprus, Republic of Cyprus: The site of Mount Olympus, this ancient island in the Mediterranean is steeped in Greek mythology and known as the home of the gods and the birthplace of Aphrodite. It’s only fitting that the goddess of beauty was born in Cyprus, with its dramatic cliffs and gorges, lovely sand dunes, and cascading waterfalls. The towering sea stacks of Paphos rival the famous formations of Thailand’s Phang Nga Bay, though they don’t appear nearly as much on social media. Be the first of your friends to Instagram Aphrodite’s Rock before heading to Konnos Bay Beach for the sunset.

5. Vis, Croatia: Located in the Adriatic Sea, Vis is the farthest inhabited island off the coast of Croatia — and this largely unknown seaside getaway feels light-years away from the day-to-day concerns of civilization. The photogenic oasis is home to freshly-caught seafood, charming old fishing boats, loggerhead turtles, and an array of local wines, making it a picture-perfect Adriatic vacation.

6. Sidi Bou Said, Tunisia: This cliffside city north of the Tunisian capital city Tunis will easily take your breath away. The blue and white architecture is set to a backdrop of the spectacular Mediterranean Sea and North African sky. Though Sidi Bou Said shares the same color palette as Santorini in Greece, it has yet to be splashed all over social media. Plan your trip soon, because this gorgeous destination won’t stay a secret for long.

7. Isla de Mujeres, Mexico: Though just a 20-minute ferry ride from Cancun, Isla de Mujeres feels totally disconnected from the mainland. The entire island is only four miles long and easily navigable by scooter or golf cart. (We recommend heading south for the wilder, less-populated Caribbean coastlines.) Wake before sunrise and set out for Punta Sur — the island’s southeastern tip is the first place to be touched by the rising sun in Mexico.

8. Kyoto, Japan: Though Japan has become increasingly popular as a skiing destination, the country is largely overlooked in the summertime. The coast of Kyoto is full of surprises, like the massive Tateiwa Rock (“Standing Rock”) jutting into the Taizura Inlet. But nothing surpasses Ine-cho, nicknamed the “Venice of Japan.” This fishing village on Ine Bay is lined with funaya (boathouses) that appear to be floating upon the water. The houses are unforgettable and unique — just like your trip will be.

9. Tucker’s Town, Bermuda: With its pink sand, glowing limestone, and bright blue water, Bermuda is the definition of natural beauty. Even the man-made elements of the island are colorful and striking, with pastel buildings matching the pinks and blues of its coastal surroundings. Be sure to visit Horseshoe Bay, the pink sand beach that’s #nofilterneeded; explore the sparkling underground Crystal Caves; and order a rum swizzle and Bermuda Fish Chowder before heading back home.

10. Deer Isle, Maine: We’re headed stateside for our final selection, an island in Maine on Penobscot Bay. Who needs a sandy beach in the tropics when you can have a treacherous cliff overlooking the (usually frigid) Atlantic? Joking aside, the ruggedness of Maine is part of its appeal: the jagged coastline, the vivid green forests, the lobster boats making their way through the morning fog. And oh, about that lobster — it’s the only food on Instagram that’s not only totally acceptable but also actively encouraged.

What’s the seaside town you’re dying to splash all over your Instagram feed? Let us know @BritandCo!

Katherine Parker-Magyar
Katherine is a freelance writer focusing on travel, culture, lifestyle, and politics. Her work has appeared in The Week, Tasting Table, Elite Daily, POPSUGAR, and Electrify, among other publications. She's traveled to all 50 states and 40 countries, but calls New York City home. Follow along on Instagram at @katherineparkermagyar or visit her website at www.katherineparkermagyar.com.
Beach
Travel
Beach Instagram Travel Ultimate Guide to Summer Vacation
More From Travel