An Ode to My Freshman Year Roommate, and an Overdue Apology for That Diary Entry 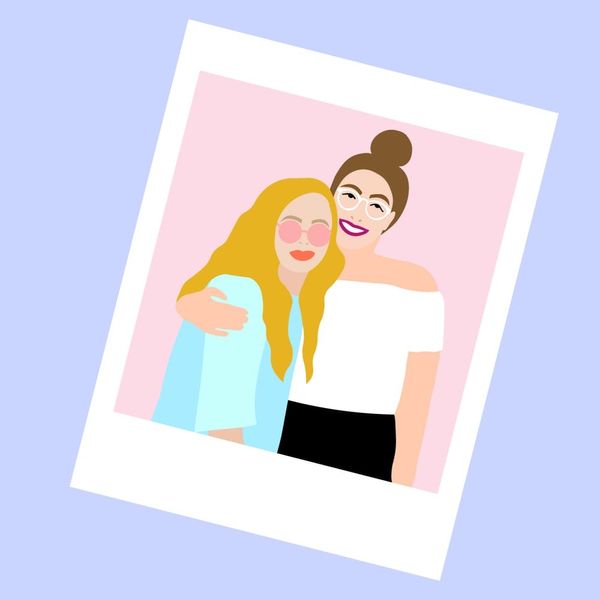 When I think about my freshman year of college, I think of fraternity floors so filthy my shoes would stick to them, and I think of my go-to dining hall order of ham and Swiss toasted on wheat bread with a pickle, and I think of a football stadium packed with crowds only an SEC program could draw in. But I can’t remember any of these moments without thinking of the person who defined them, the person who elevated everyday happenings — like eating what was, in retrospect, a pretty gross sandwich — into cherished memories: my roommate, Lauren. The journey hasn’t always been sunshine and roses, but our conflicts have shaped our friendship and made us into the besties we are today.

I met Lauren by a stroke of luck, or rather, the click of a computer mouse. I happened upon her profile on our university’s website designed to help incoming freshmen pair up with potential roommates (think Facebook, but only for our school). She was also from California, a rarity at our Midwestern campus, and we had the same major. As we got to know each other, we realized that these surface-level similarities translated into shared passions and values on a much deeper level. Three years later, Lauren, who I now incorrectly refer to as “my roommate” at least three times a day, is still my best friend. And I’m confident I’ll be able to say the same thing when it’s been 20 years instead of three.

Lauren was a snorer (don’t tell her I told you), and there would be mornings I would wake up already mad at her because of the hours she’d kept me up during the night.

Then there was the time she convinced me she’d fallen down the steps of an academic building, broken her neck, and potentially been paralyzed as part of an entirely unfunny April Fool’s Day prank, and I was so furious with her I made her cry.

Then there was the time I angrily scribbled a diary entry about how I was jealous of her friendship with my ex-boyfriend and then proceeded to read it to her in an ill-planned attempt at constructive confrontation. My bad!

And I can’t even begin to imagine what anecdotes she would include on her list if she were writing her own article.

Although these conflicts are far cries from the roommate horror stories that have circulated the internet, to acknowledge that my time as Lauren’s roommate was not perfect is essentially synonymous with acknowledging this: No roommates are perfect. Lauren and I are the best of friends, yet we still couldn’t make it a year without conflict.

Going idealistically into a living situation in which you’ll have a roommate, no matter how close or distant you plan on being with them, is setting yourself up for disappointment. So expect fights, expect angry diary entries and guilt-soaked tears. Because there will be, and that’s okay.

How do you navigate conflict with your BFF and/or roommate? Let us know @BritandCo!

Annamarie Higley
Annamarie is a Californian who's been plopped in the middle of Missouri for her undergraduate studies in magazine journalism. She's a hiker, an eater, a lover of words. In her opinion, nothing beats a well-made breakfast sammy or a well-crafted sentence.
Back to School
Relationships
Back to School Relationship Advice
More From Relationships