Olympian Hayley Wickenheiser on Succeeding in a Male-Dominated Sport 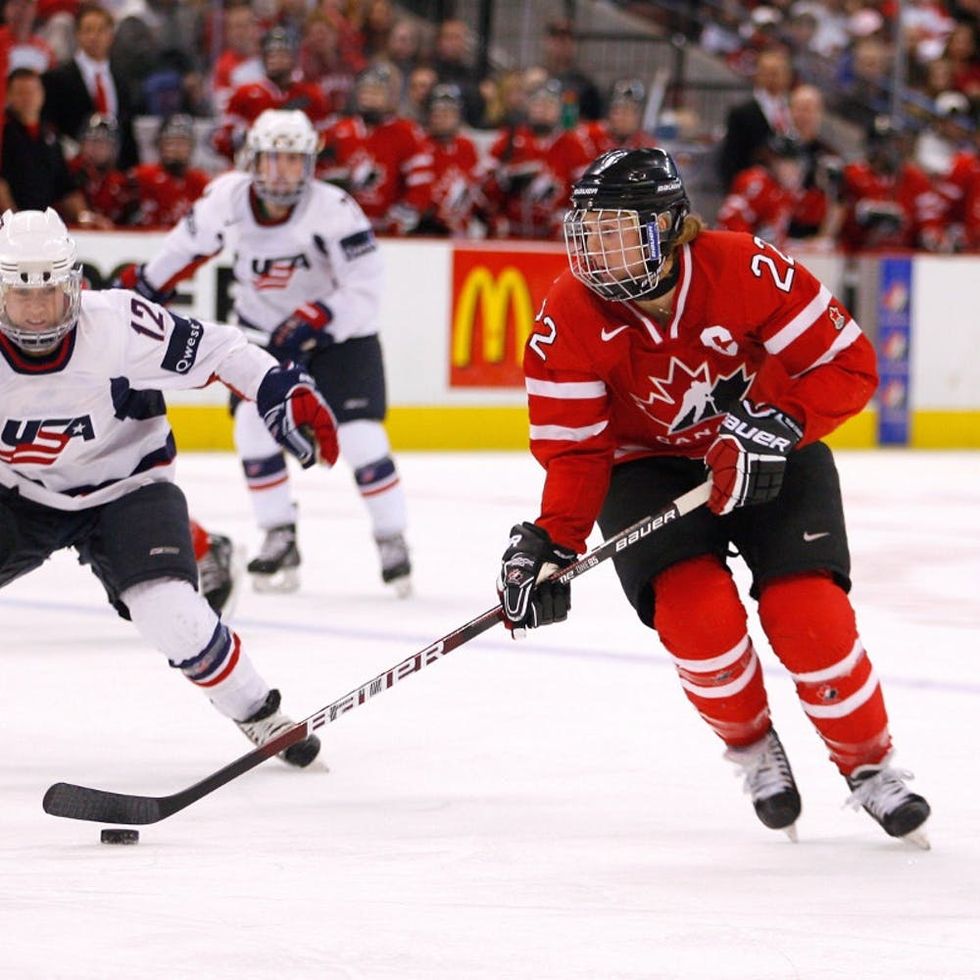 If you’ve ever had the chance to watch Hayley Wickenheiser dominate on the ice, you’d know that she’s one of the most passionate hockey players to ever grace an Olympic arena. Representing Canada at the Winter Olympics five times (earning four gold medals and one silver), Wickenheiser quickly became a household name — one you often heard fervently yelled in homes all across the hockey-obsessed country throughout her impressive 23-year professional career. Since officially retiring in early 2017, Wickenheiser has continued to inspire young athletes and has now turned her attention to passionately advocating for young girls to get off the sidelines and involved with sports that are typically dominated by boys (and yes, this includes hockey). We recently caught up with Wickenheiser to chat about her fascinating hockey career, how the gender wage gap and representation matter, and why an encouraging message from her coach after an upsetting silver medal still stays with her today.

Brit + Co: First of all, thanks so much for taking the time to speak with us today. As a Canadian girl who grew up watching hockey, I couldn’t tell you how excited my 10-year-old self would be if she knew I was speaking to you.

Hayley Wickenheiser: Thanks for choosing to interview me — I’m so glad to hear that!

B+C: Jumping back to the beginning of your career, your first Olympic experience was during the 1998 Olympic Games in Nagano, which was also the first year that women’s hockey was included as an official event. How did it feel to be part of the inaugural Olympic event for your sport?

HW: It was such an honor to be playing on the 1998 Canadian Women’s Hockey Olympic team. The whole world was watching, and it felt like it was time to show them what we could do — so that’s what we did. I was not only representing myself as an Olympian and a Canadian: It was much more than that. I was representing all women out there who were told that hockey was a “men’s sport.” Sports should be gender-neutral across all boards. It’s sad that it took so long to recognize women’s hockey in the Olympic games, but it was so rewarding to be part of that movement in 1998, because it really put women’s sports on the radar.

B+C: Today, women’s hockey is a big deal. I had the opportunity to see Team Canada play during the 2010 Olympics in my hometown of Vancouver, and it was abundantly clear that an entire nation was laser-focused on your sport and cheering on the women’s team just as much as the men’s. (Congratulations on the gold hardware, by the way!) With the 2018 Winter Games now wound and Team Canada’s women hockey team home with another medal, how does it feel to see your legacy live on within Canada Women’s Hockey?

HW: It is such an incredible feeling to not only see the legacy live on within Canada’s Women’s Hockey team, but also to see how far we’ve come as female athletes in the last 20 years. When I was growing up, many young girls around me would drop out of sports leagues because of the stigma that surrounded certain sports. Today, it’s not unusual at all to see a young girl walk into a rink with a hockey bag slung over her shoulder. It wasn’t that way even just 20 years ago. I feel proud that I played a very small role in that, but there were many who came before me and many who will come after me. An athlete is an athlete, no matter their gender — and I think we are slowly moving into that space.

B+C: You’re a big advocate for encouraging young girls to try sports that are typically dominated by men. In fact, you grew up playing on boys’ hockey teams. Can you tell us a little bit about what it was like competing with the boys growing up?

HW: Absolutely. Sports keep you active, teach you discipline and teamwork, and can even help you learn leadership skills — this is across the board for all sports. I encourage boys and girls to try all sports. I don’t care if they are stereotypically “male” or “female” — I strongly believe girls should dabble in several sports and decide what they have the most fun participating in if they are given equal opportunity to participate. Period. End of story.

Sometimes off the ice, it would be uncomfortable, because I had to change in boiler-rooms or cars and I’d miss that dressing room interaction. Sometimes the guys — actually more often the parents — didn’t like the fact that I was leading a team in scoring or whatever, so I’d face jeers and snotty remarks; but once I got on the ice, I was perfectly comfortable and at home. It’s where I was happy and in my zone. None of the other stuff mattered.

B+C: While it’s getting slightly better, media representation in sports is still a big problem. If I turn on the TV right now, I can see over 20 channels broadcasting men’s sports, and I would be lucky to see one or two that are broadcasting women’s competitions. (For women’s hockey, I have to wait nearly four years to see the sport broadcast on a major network.) What are your thoughts about the lack of media representation for women’s sports?

HW: People have to watch the games that are broadcast. If there is demand, there will be supply. It’s simple economics for the broadcast. I think as time goes on more and more men and women are watching women’s high-level sports and therefore more are being broadcast. It’s a process to show the skill and talent and how engaging the games are to watch. Give people a good product. That’s on the players and the league(s). They show the broadcasters that there are people who want to watch that level of sport. That’s on the people. It’s happening. Slowly, but surely. It’s already changed a lot in my lifetime and will continue to.

B+C: Have you had any experience with sexist post-game comments from reporters?

HW: I think on some level most female athletes do — whether it’s backhanded compliments or focusing on the fact that it’s women’s hockey or women’s lacrosse. It’s unfortunate, but I do definitely believe that the sports world has made some huge improvements in just the past few years.

B+C: Recently, US Women’s Soccer filed a wage discrimination complaint against the sport’s governing body when it was reported that the women’s team only made about 40 percent of what their male counterparts did. Is there a similar wage gap for women’s hockey players?

HW: There absolutely is. Canada’s Women’s Hockey Team put in a lot of work from the very beginning to fight for our voices. Once we brought home that silver medal in the 1998 Olympic games, we returned home still feeling under-appreciated. We wouldn’t settle for that, so we spoke up to Hockey Canada and reached some common goals. I like to believe that the Canadian women’s team really helped pave some of the other wage-gap movements. The US Women’s Hockey Team formed a deal very similar to ours with USA Hockey. After fighting for equal rights and better pay, both Canada and USA women’s teams are compensated monthly, regardless of whether or not it’s an Olympic year.

B+C: Can you tell us a little about your partnership with SidelineSwap?

HW: When I first found out about SidelineSwap, I knew it was something I had to invest in. This company has created this niche community that allows people from all demographics and socioeconomic backgrounds to start playing sports. Hockey is one of the most expensive sports to break into. Not only is the equipment extremely expensive, but it gets damaged frequently because of the high impact it goes through each time it’s used.

The cost of sports like hockey, golf, and lacrosse has caused a barrier to entry. There are many kids across the world who would love to get into one of these sports, but they simply don’t have access because of the cost. For them to have the opportunity to go onto SidelineSwap and buy gear for 50 percent off the original cost is HUGE. SidelineSwap does everything they can to make sports more cost-effective and accessible to athletes everywhere. Every year the SidelineSwap team offers scholarships to individuals who are passionate about their sport but having a hard time keeping up with the cost. It’s a powerful company that I am so proud to be a part of. I look forward to seeing it continue to grow.

B+C: What was the best piece of advice that one of your coaches gave you?

HW: After a silver medal win in 1998, I was feeling pretty down on myself and very frustrated. My coach and mentor Wally Kozak, one of the greatest hockey men I know, gave me a piece of paper that said, “A gold medal is a wonderful thing. But, if you aren’t enough without it, you’ll never be enough with it.” It was a bit of a smack in the face, but I have carried that concept with me into every part of my life. You have to be strong enough and believe in yourself enough as you are, without the external validation. You will find strength in that place — and a gold medal, or a pat on the back, or an A on a test, or whatever it is you are striving for is just the icing on the cake.

B+C: What’s one piece of advice you would give to young female athletes who are trying to succeed in male-dominated sports?

HW: My best advice to all those young female athletes would be to find what you’re passionate about, and never sell yourself short. Push all stereotypes aside and do what makes you happy. Whether its hockey or ballet, you should never feel “less than” because people stigmatize certain sports in certain ways. Follow the drive that’s in your heart and, I promise you, you will never regret pursuing it.

Tweet us your favorite moment from the 2018 Winter Olympics @BritandCo.

Ashley Macey
Ashley Macey is a lifestyle freelance writer who loves all things fitness, wellness, and creativity. When she's not exploring her home in the Pacific Northwest with her dog Max, you'll probably find her curled up with a good book and some hot tea. Follow her daily jaunts on Twitter.
Career Advice
Creativity
Career AdviceGirlbossInterviewOlympics

23 Easy Tapas Recipes For The Best Tapas Party in 2022

14 Gratitude Journals To Help You Give Thanks Daily