Oscars 2018: What Frances McDormand Meant When She Said “Inclusion Rider” 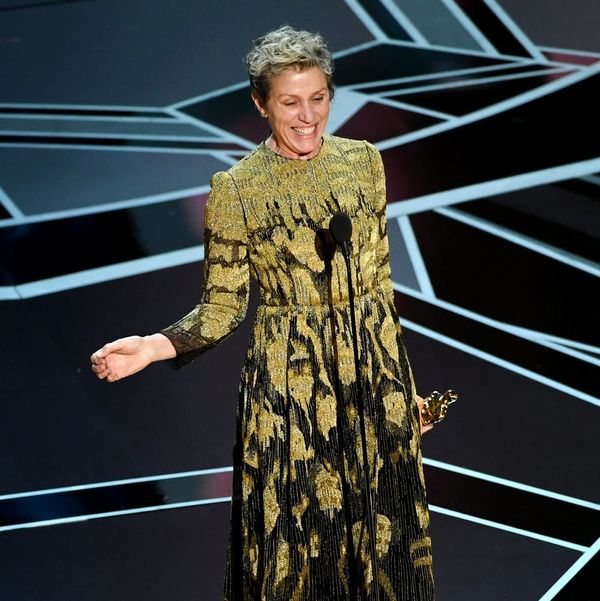 The fact that Frances McDormand won the 2018 Best Actress Oscar on Sunday night for her performance in Three Billboards Outside Ebbing, Missouri should come as no surprise — she absolutely destroyed it in the film’s lead role. What was surprising was how she finished her acceptance speech.

“I have two words for you,” said McDormand. “Inclusion rider.”

The statement undoubtedly sent more than a few viewers on a Google search to define the relatively unknown term. We’ll save you that hassle by breaking it down for you here.

An inclusion clause is a statement in an actor’s contract that stipulates the film must achieve a certain level of diversity in the cast and crew.

The idea was proposed by academic and Stacy Smith, who founded the Annenberg Inclusion Initiative at the University of Southern California. She explained in a 2016 TED talk that casting in US films does not represent the diversity that exists in the actual population. She suggests that having a starring actor demand in their contract that the cast and crew match real-world diversity could go a long way towards making the system more equitable.

“The goal is that talent can take the inclusion rider and adopt it in ways that make sense for their values and their beliefs,” Smith told the Guardian. A rider could be tweaked to ensure that LGBTQ+ people, women, people of color, and people with disabilities are represented.

In an essay published in the Hollywood Reporter in 2014, Smith also had a couple of other great suggestions:

“A typical feature depicts roughly 45 characters,” writes Smith. “Most of them aren’t leads or even secondary roles, but rather tertiary characters speaking one or more words. Gender stereotyping in these small parts (police, doctors, lawyers) may be why we see consistent imbalance onscreen.”

The solution? Cast a woman in five of these roles, instead of a man. She also suggests that the industry adopt the NFL’s Rooney Rule, which stipulates that the league consider people of color for head coaching positions. Smith suggests that Hollywood execs should at least interview women for director positions as a way to correct the dramatic gender imbalance in these roles.

So who’s on board? Actor Brie Larson quickly tweeted her support for the idea:

I’m committed to the Inclusion Rider. Who’s with me? https://t.co/yvQ0wR5D80

As did Elizabeth Banks:

The concept is even reaching beyond the film industry:

As the #MeToo and #TimesUp movements progress, people are looking for practical ways to make real change. Thanks to McDormand and the work of Stacey Smith, actors may soon be including inclusion riders in their contracts — a giant leap in the right direction.

Should Hollywood actors take up inclusion riders in their contracts? Tell us @britandco.

Lia Grainger
Lia Grainger is a freelance journalist and reluctant nomad who divides her time between Canada and Spain, weather dependent. She's written for The Atlantic, Reader's Digest, the Toronto Star and other print and online publications, and her work appears in dozens of languages around the world.
inclusivity
Diversity
inclusivity LGBTQ Movies Oscars