This DIY Wedding Is a Paper Flower Dream Come True 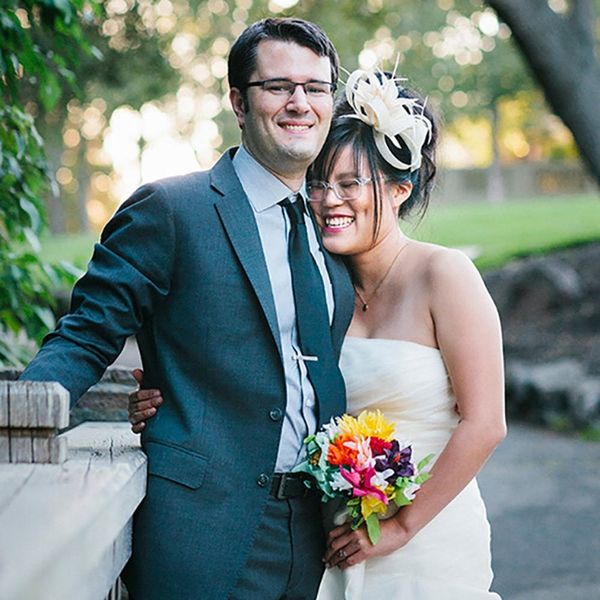 It should come as no surprise that a wedding isn’t a cheap occasion. A venue, a planner, food — it all adds up quickly. If you don’t feel like diving into a pile of debt as newlyweds, getting crafty with some aspects of the big day can significantly cut down costs without sacrificing style. Case in point: Stephanie and Mike.

This past autumn this adorable couple tied the knot in Piedmont, CA, a charming town near Oakland, CA. Stephanie and Mike didn’t have a massive budget to work with so they used their filmmaking backgrounds to get creative. From hundreds of paper flowers to temporary tattoos, these two added DIY elements that made their day not only a little cheaper, but infinitely more fun. Below are some of Stephanie’s favorite elements from her bright and quirky ceremony.

Imperfect Together: While the couple wasn’t super keen on attaching any sort of theme to their wedding, one of their wedding planners suggested the theme of “imperfect together.” Stephanie says, “We love how when things aren’t totally perfect, they feel more authentic, more personal. That’s definitely who we are and how we are together — odd, strange and slightly off — but somehow, when put together, it sort of all makes sense. It also gave us liberty as designers to mix patterns, colors and styles and celebrate exuberance everywhere we could. Lots of things didn’t fit with each other, but under the umbrella of our theme, it was okay.”

Custom Buttons: “I’ve always loved little buttons, from back in the days when they were rare and you only got them when you went to see some obscure band in a dingy bar,” Stephanie says. “Now you can get custom ones made anywhere. So I illustrated things that meant something to us — from our filmmaking backgrounds to our love of Doctor Who to our cultural heritages. These were attached to people’s name tags and matched a sign on the tables so they could find their assigned tables. We put extras on the tables so kids (and grownups) could collect them all and be encouraged to mingle with the other tables in order to collect them.”

Ampersands All Over: When Stephanie and Mike began planning their wedding, they were unsure about a lot, but one thing was certain: They wanted to feature a big, handmade marquee ampersand that they purchased off Etsy. The ceremony took place outdoors in a space surrounded by natural elements and redwoods, which felt so different than the party style of the marquee ampersand. But they still wanted to somehow carry the symbol throughout the evening. So they built an organic-looking cousin. Mike traced the same ampersand shape into cardboard, hot-glued moss and paper flowers to it and framed the space with a paper flower garland.

Polaroid Pictures: While an old-school polaroid was sadly out of the question, Stephanie and Mike found a way to incorporate the instant snaps that they say “really capture a moment that is a little askew and not quite right, but absolutely amazing.” They put out a bunch of Fuji Instax cameras next to the guestbook, as well as washi tape so people could take pictures and stick them in. Stephanie even made a backdrop from gold floral sheeting that parade floats are decorated with to match the gold-sequin tablecloths in the dancing area. She admits that one of her favorite moments from the day was watching “Mike’s aunt chasing people down with the Fuji Instax cameras to make sure everyone was represented in the guestbook.”

Paper Flowers: Stephanie tells us, “We were drawn to a lot of bright colors and textures for flowers, but trying to buy and arrange them ourselves the week of the wedding was unfeasible. Instead we decided to make hundreds of paper flowers. Since our wedding was a year away, we spent many nights turning on Netflix and cranking out tissue paper flowers of all colors and styles. We ended up using them everywhere — from the bouquet to the table centerpieces to paper cherry blossoms for the bar. We even had them peeking out of the typography on the menu.”

Sculpey Cake Topper: We’ve seen a lot of cake toppers in our day, but this one takes the cake (pun fully intended). Stephanie knew she wanted something personal as the topper so she crafted clay heads of Mike, their dog Coco and herself. Adorable might be an understatement for this one.

Temporary Party Favors: Without much of a budget to spare for party favors, the couple hit upon the idea of having an assortment of temporary tattoos at the reception. Stephanie tell us, “I designed a bunch and asked friends to contribute artwork and then got them printed by StickerYou within a few weeks of the wedding. On the big day, I think both Mike and I were truly shocked when we came back from getting our portraits done and how many guests, young and old, were branded with our tattoos. Especially in some pretty ostentatious places. Men loved putting a big ampersand on their neck! It was so much fun to see.”

Are you planning a handcrafted wedding? What elements are you DIYing? Share with us in the comments below or tweet us a pic!

Cortney Clift
Cortney is the senior writer and special projects editor at Brit + Co. She typically covers topics related to women's issues, politics, and lifestyle. When she's not buried behind her computer you'll find her exploring New York City or planning her next big adventure.
Flowers
Party
Flowers