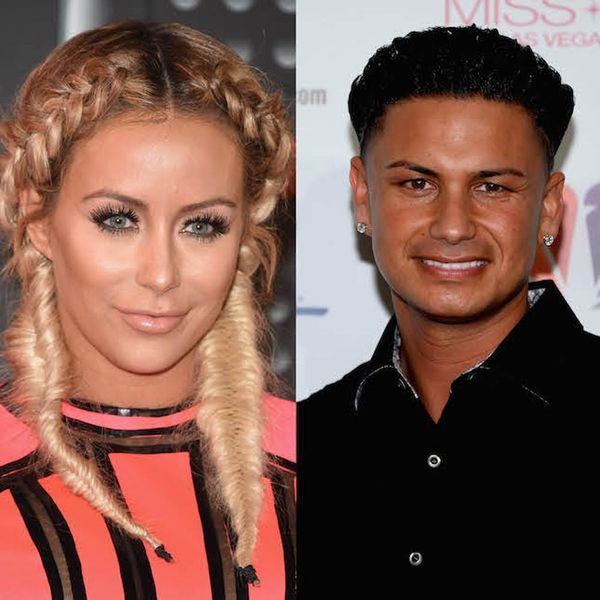 Celebrity couples are often strange — take a look at the oddly matched but cute pairing of Gwen Stefani and Blake Shelton. Here’s one that might blow your mind even wider open… Aubrey O’Day and Pauly D, both bastions of pop culture circa 2009, have been basically inseparable on Instagram (as pictured above). The two met while filming a new E! reality show, as one does these days. In celebration of their total #TBT, here are nine other reasons 2009 was the jam.

1. Slumdog Millionaire: Remember these two cute kids? It’s awesome how Dev and Frieda have grown up and gone on to do things like become style icons and A-list stars. Also, did you know they broke up two years ago and that he was six years younger than her? The dream of having two attractive, successful actors make it has been dashed, once again. (Photo via Stephen Shugerman/Getty)

2. Susan Boyle: This Scottish lady stunned the world — and more importantly, Simon Cowell — when she belted out “I Dreamed a Dream” from Les Miserables on Britain’s Got Talent. The video of her performance went viral and was one of the top plays that year, garnering 2.5 million hits in only the first 72 hours alone. Susan’s gone on to be a successful singer in her own right. (Photo via Karwai Tang/Getty)

3. Avatar: Want to talk about #crushedit — 2009 was the year Avatar surpassed Titanic as the most successful film of all time. The science fiction film took a whopping 15 years to come together, but it paid off, raking in two billion dollars worldwide to date. If reading this made you nostalgic, fear not: N’avis will return to the screen in sequels in 2017 and 2019. (Photo via 20th Century Fox)

4. Bo Obama: Can you believe it?! The dog that single-handedly brought Portuguese water dogs into American pop culture is turning seven this year. While he was technically born in 2008, he became an Obama in 2009. Fun fact: His name comes from singer Bo Diddley, as Diddley was Michelle Obama’s father’s nickname. (Photo via Chip Somodevilla/Getty)

5. The Fame Monster: Hard to believe, but Ms. Stefanie Germanotta has been in the pop culture cannon for almost a decade. She really became a superstar with 2009’s mega-hit album The Fame Monster, led by her smash hit “Bad Romance.” All the McQueen. All the fashion feels. (Photo via Bryan Bedder/Getty)

6. Balloon Boy: The hoax of the decade (or at least the year) belongs to “Balloon Boy” and his family, who claimed that they let a large helium balloon off into the air with their son Falcon inside. The balloon was silver and large enough to be mistaken for a UFO. Turns out young Falcon was never inside the balloon, costing the state of Colorado money and time for the ordeal. The parents pled guilty to the charges filed against them related to the hoax. (Photo via Marc Piscotty/Getty)

7. Sexting: This now common texting practice was at its height in 2009, having first surfaced alongside the text back in 2005. It became part of the dictionary in 2012, and has gained immense popularity — and controversy — on sites like WhatsApp and Snapchat. Even your parents know what it means by now.

8. Ashton Kutcher: Husband to Mila Kunis and father to baby Wyatt now, Ashton Kutcher hit the peak of his fame back in 2009 when he challenged the Internet to see who could be the first person to reach a million Twitter followers. These days that’s chump change (Kim Kardashian has an unbelievable 40.6 million followers), but back then, it was a pretty big deal. Also, RIP Demi and Ashton. (Photo via Amy Sussman/Getty)

9. Octomom: File this under things you wish you could forget — Nadya Suleman gave birth to octuplets in 2009. That’s eight babies at once, if your math skills are rusty. There was public controversy once it was revealed that she also had six other children at home. Her life opened up conversations surrounding in vitro fertilization, and she’s since fallen into relative obscurity. (Photo via Noel Vasquez/Getty)