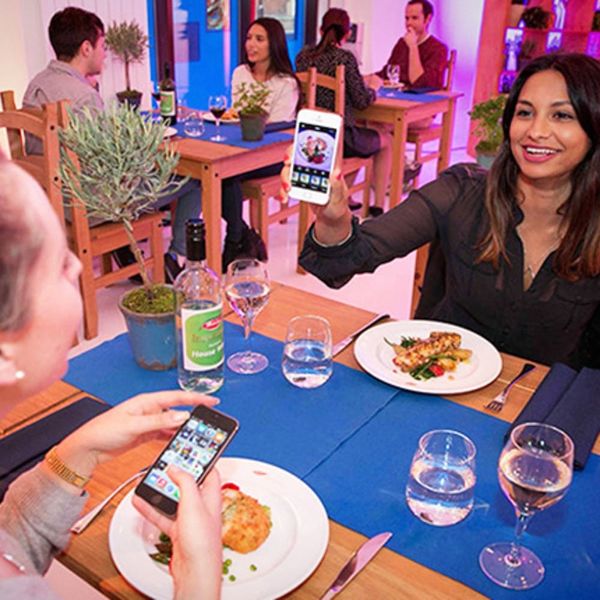 Have you ever walked into a restaurant and noticed that almost every person and their mother (literally) was on their phones? Alright, we admit that we’re guilty of choosing our phones over company at times, but it’s even worse when students are texting and Snapchatting during class. It’s okay, Teach — there’s finally a solution and, ironically, it’s an app.

Pocket Points is the App Store’s latest addition that rewards students for not looking at their phones during class. It’s super easy to use, and before you know it, you’ve got a free bagel and a slice of pizza. You just need to sign up for an account, open the app when you enter the classroom and the locations feature will detect whether or not you’re at an academic building. Once you confirm with the app that you’re in class, you’ll start gaining points. For every 20 minutes that you don’t look at your phone, you receive one point. But what’s the point of keeping score if there’s no prize?

Using your points, you can redeem rewards at participating stores and restaurants. Usually, racking up 25 points will get you free coffee or a bagel — and no, you won’t need to travel far just to find a participating store. There are many bagel and pizza joints on board in addition to Cold Stone Creamery and Pita Pit. In total, there are about 100 participating locations, and it’s only growing. Hopefully your stomach and classroom attention span are too ;)

Pocket Points is already in use in five high schools and six college campuses, including Penn State University, University of Arizona and San Diego State. But Pocket Points might eventually expand out of the academic arena. Rob Richardson, a current junior at Chico State and one of the developers of the app, said he sees potential for the app to be used in other environments where using the phone is widely seen as an annoyance *cough* restaurants *cough*. You go, Pocket Points!

Which campus do you want to see Pocket Points at? What other environments do you want this app to reach out to? Talk to us in the comments below!

Stephanie Chon
As a spoken word fanatic, Stephanie enjoys journaling about her day using imperfect rhymes. In her free time, she likes to dance, watch random episodes of How I Met Your Mother and play her ukulele.
Education
Tech
Education
More From Tech