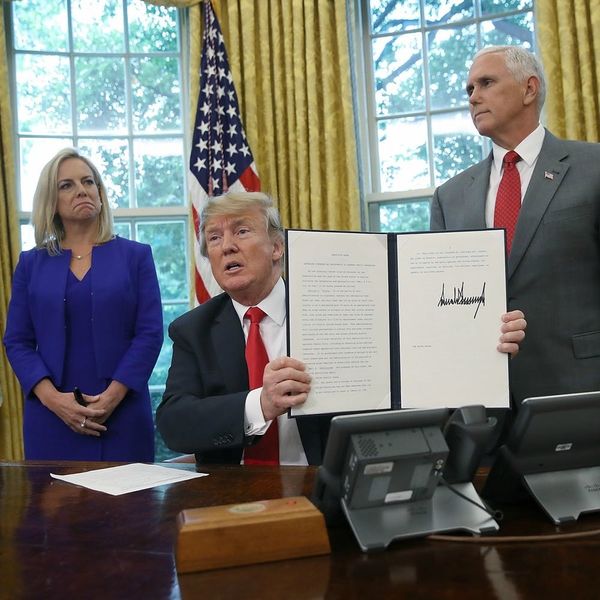 In a complete 180-degree turn, President Trump signed an executive order on Wednesday, June 20, ordering that families be kept together when detained by Homeland Security for crossing into the US without legal paperwork. The executive order does not, however, state how the 2,000-plus children currently separated from their families will be reunited. Here’s what we do know about the new executive order to keep migrant children with their parents — and what it means right now.

The order states that illegal migrants who attempt to enter the country will still be apprehended and detained by the Department of Homeland Security until they undergo criminal proceedings, but that children and parents will be kept together unless border officials believe that the parent poses an immediate threat to the wellbeing of the child.

However, the executive order also calls for Attorney General Jeff Sessions to file a request with a California District Court to make changes to a 1997 settlement, Flores v. Sessions, in order to roll out the new policy. This clause doesn’t make clear how long the process of revising the “Flores settlement” would take before the new policy would come into effect, and the order as a whole doesn’t specify what the decision means for the thousands of children currently being detained away from their families.

As BuzzFeed news reports, the Flores settlement requires a policy of releasing children from immigration detention “without unnecessary delay.” But the Flores Settlement does not strictly prohibit the government from holding children in the first place. Rather, it offers a series of rules that lay out the conditions of detention, criteria for being detained, and the length of time that a child can be detained under different circumstances.

When signing the order on Wednesday, President Trump emphasized the “compassion” that was driving the decision to stray from a policy that he and his administration had so vigorously defended (and lied about). But he also stuck to his refrain of “zero tolerance,” evoking the language that has been used in association with the policy of family separation.

“It continues to be a zero tolerance,” said Trump. “We have zero tolerance for people that enter our countries illegally. I think the word ‘compassion’ comes into it. But it’s still equally as tough, if not tougher.”