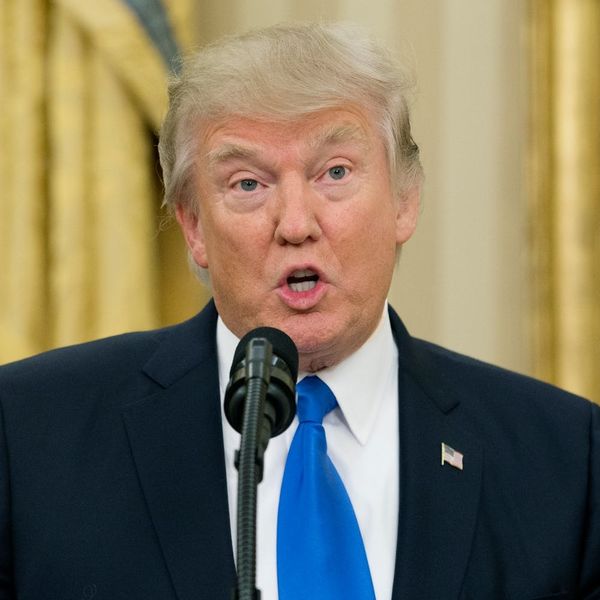 President Trump certainly likes to have things his way (seriously, the song he chose for his inauguration was Frank Sinatra’s “My Way,” because why not just be super obvious?), which is why we’ve witnessed so many drastic changes in his first week in office. But now, it’s his controversial (some say sexist) “dress like a woman” rule that’s sparked the latest firestorm.

According to Axios, a source who worked on the Trump campaign has revealed that there’s a dress code folks on the President’s team must follow.

If they don’t, they’re apparently “reamed” for it, just like Press Secretary Sean Spicer was for his outfit at his first briefing room meeting. Ouch.

So what must Team Trump wear? Well, male employees “need to have a certain look” and “be sharply dressed.” While we’re left to wonder what the “certain look” is (we’re sure you can make a pretty accurate guess), the ladies have been told to “dress like a woman.” Um, what?

Perhaps he’s thinking along the lines of what Kellyanne Conway would wear. Her striking style (whether you’re into it or not) certainly gets people talking.

And though we again can only imagine what this rule implies, folks on the internet have their own ideas, which has (natch) sparked a now-viral hashtag, #DressLikeAWoman…

How to #DressLikeAWoman
Step 1: Be a woman
Step 2: Put on literally any article of clothing
congrats, you are now dressed like a woman

.@realDonaldTrump #DressLikeAWoman … is this what you had in mind? 🤔🤔🤔 pic.twitter.com/9JvoGUpWRZ

Bring your baby. Teach her to vote. Teach her to govern. Dress like Licia Ronzulli in European Parliment. #DressLikeAWoman pic.twitter.com/t3jNEPVaC2

This is Anousheh Ansari, an Iranian-Born American. She was the WORLD'S First Muslim woman in space. Look @POTUS she can #DressLikeAWoman pic.twitter.com/I9Ow8AQ55G

Here is a good example. pic.twitter.com/vF7uhMXmsb

My grandmother, an immigrant, pictured in her British ATS anti-aircraft gunner's uniform. She shot nazis out of the sky. #DressLikeAWoman pic.twitter.com/pEseQlLO7q

#dresslikeawoman Katharine Hepburn when harangued about not wearing a skirt: "I’ll wear it to your funeral.” pic.twitter.com/8yz2UvCtX3

#DressLikeAWoman Marry a woman while ur both dressed like women! pic.twitter.com/YxucRXtfQH

What it really means to #DressLikeAWoman?

No rules except being yourself. pic.twitter.com/xgx5tJBx0U

Desiree O
Desirée O is a ‘Professional Bohemian’ who loves anything and everything related to the arts, entertainment, and pop culture. She ADORES being a ‘Newsy’ for Brit + Co, covering all of the latest tidbits of awesomeness that you want to read about. When she’s not writing, she’s either making messy art, going on long adventurous walks with her camera, or poking around over at bohemianizm (http://www.bohemianizm.com/). You can find out about Desirée O and her work at http://DesireeO.com/ or follow her on Twitter @DesireeO.
Politics
Politics
Politics twitter
More From Politics