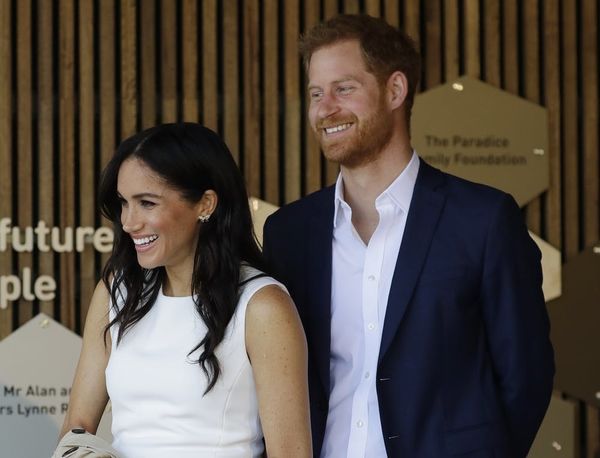 On Monday, Prince Harry and Meghan Markle revealed that they’re expecting their first child together in the spring, and on Tuesday, Harry addressed the exciting news for the first time, acknowledging his wife and baby-to-be in an adorably nervous speech.

“We’re both absolutely delighted to be here and to see you serving beer and tea at an afternoon reception in true Aussie style,” Prince Harry joked at an event at Admiralty House in Sydney, Australia, to kick off their current royal tour.

“We also, genuinely, couldn’t think of a better place to announce, the, uh, the upcoming baby,” he continued as he looked over at Markle, smiling. “Be it a boy or girl, so thank you very much.”

Kensington Palace announced Markle’s pregnancy on Monday morning. She is said to be due in the spring of 2019. So far, there have been no changes to the couple’s 16-date tour.

Not much else has been said publicly by the new parents-to-be, but both families expressed their joy over the news in statements released by the palace. Markle’s mother, Doria Ragland, said she is very happy and “looks forward to welcoming her first grandchild,” while Harry’s family, including Prince William, Duchess Kate Middleton, Queen Elizabeth II, Prince Philip, Prince Charles, and Camilla, Duchess of Cornwall, said in a statement that they are “delighted” by the news.

The couple have already been gifted toys for the baby — including a stuffed kangaroo and a pair of Ugg booties from the Governor General Peter Cosgrove and his wife, Lady Lynne Cosgrove — on their tour, which will also take them through Fiji, Tonga, and New Zealand.

What do you think of Harry’s speech? Let us know @BritandCo!