The Bachelorette’s Rachel Lindsay and Bryan Abasolo Have a Wedding Date! 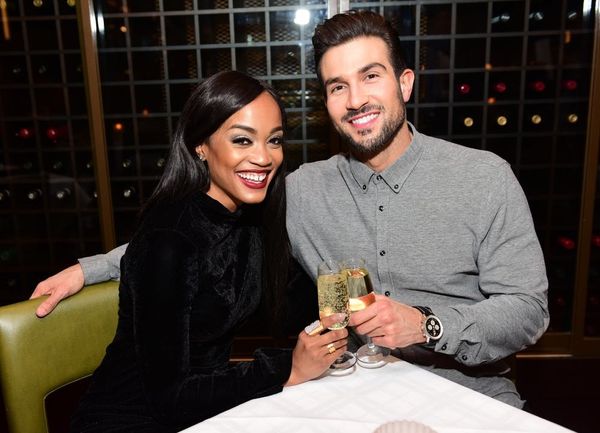 Rachel Lindsay hasn’t revealed much about her wedding plans with fiancé Bryan Abasolo — but her silence shouldn’t be mistaken for inaction. In fact, the couple’s big day is set for later this year.

“We have a date, we just haven’t officially released it,” Lindsay told People magazine at the Los Angeles premiere of What Men Want on Monday, January 28. “It will be a destination wedding and it will be toward the end of summer. That’s the biggest hint that I can give. … We’re excited, and now I have to hurry up because it’s just six months away.”

Although she previously considered wearing a suit to walk down the aisle, it now sounds like she’s changed her mind. She told Entertainment Tonight she’ll be wearing a dress by Randi Rahm, who designed the gown she wore when Abasolo proposed on The Bachelorette.

Lindsay also offered more details about the ceremony itself, such as the fact that she won’t have bridesmaids. As for the guest list? “It’s already at 150, so it’s bigger than I would like for it to be, but that’s okay,” she shared with People.

Thankfully, she has a professional to help her out. According to People, Lindsay and Abasolo hired wedding planner Michael Russo to handle their nuptials. “I’m not a bridezilla,” she told the mag. “I don’t have colors, I don’t have flowers, I’m just like, ‘Let’s get it done!'”

“I have found love in a very untraditional way and we want to share our journey with people,” she continued to People. “And so that’s why it has become bigger than I would like, but it is a beautiful thing.”

Did you try to blend different traditions into your wedding? Share with us over @BritandCo.

Desiree O
Desirée O is a ‘Professional Bohemian’ who loves anything and everything related to the arts, entertainment, and pop culture. She ADORES being a ‘Newsy’ for Brit + Co, covering all of the latest tidbits of awesomeness that you want to read about. When she’s not writing, she’s either making messy art, going on long adventurous walks with her camera, or poking around over at bohemianizm (http://www.bohemianizm.com/). You can find out about Desirée O and her work at http://DesireeO.com/ or follow her on Twitter @DesireeO.
Celebrity Couples
Celebrity News
Celebrity Couples Celebrity Wedding