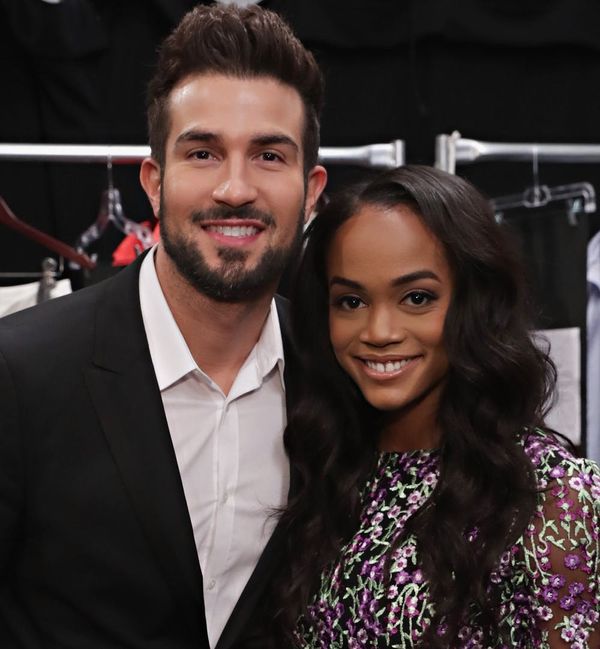 Bachelorette Rachel Lindsay has always marched to the beat of her own style drum. Whether she’s donning 30-pound gowns or going over the top with extra eyelashes, girl wears what she wants, when she wants, and her wedding day will be no exception.

In fact, as the 32-year-old revealed in an exclusive interview with Us Weekly, the fashionista has something *different* in mind for her big day. “I know I don’t want to wear a dress, I’d rather wear a suit,” she said.

That’s right! Rather than a big, poufy ballgown or a sexy stunner like the Randi Rham dress she rocked for the show’s finale, Lindsay says she’ll switch things up and go for a menswear-inspired look. “I want a high-waisted pant, maybe like satin,” the Bachelorette said, “Silk might be a little too much, and then I want it to go down, I want a wide leg.”

As for her upper half, the reality alum says she’ll opt for “a lacy top, very sexy, and then a blazer, but maybe with shoulder pads, just very sexy.”

First show of Fashion week for the lovely @dennisbasso. One show down, many more to come with this one ❤️ MUA: @makeupbyjay Hair: @cynthiaglam Styled by: @c.lewstyles #NYFW #DennisBasso #RnB #MCM #ManCrushMonday #NYC #FashionWeek

While she revealed that her hubby-to-be, Bryan Abasolo, is totally onboard with her unconventional choice, she admitted that their moms might need some time to warm up to the idea. “It’s the mothers who aren’t into the suit,” she said. “His mom would love for me to be in a dress, and my mom is like, ‘Rachel, stop. You’re doing too much.”

She also clued us in a to how she’ll do her hair for her walk down the aisle, telling the outlet, “I think people see me wear my hair down so much, I think I would do something, maybe like a low, messy bun, which is actually what I had at the proposal, but it was so windy that it turned into this tousled mess. I think I would do some sort of messy bun or maybe an updo, because you don’t’ get to see that,” she said, adding, “Pull the hair away from my face.”

As for her makeup, the Texas-based lawyer says she’ll keep it light. “With makeup, I think I’d go softer, you know? Try to look as innocent as possible.” One thing’s for sure: Whatever she chooses to wear, she’ll look positively stunning!

Are you surprised to hear that Rachel Lindsay won’t wear a dress? Share with us over @BritandCo.

Nicole Briese
Nicole is the weekend editor for Brit + Co who loves bringing you all the latest buzz. When she's not busy typing away into the wee hours, you can usually find her canoodling with her fur babies, rooting around in a bookstore, or rocking out at a concert of some sort (Guns N' Roses forever!). Check out all her latest musings and past work at nicolebjean.com.
Celebrities
Wedding Style
Celebrities Celebrity Wedding The Bachelorette Wedding Style