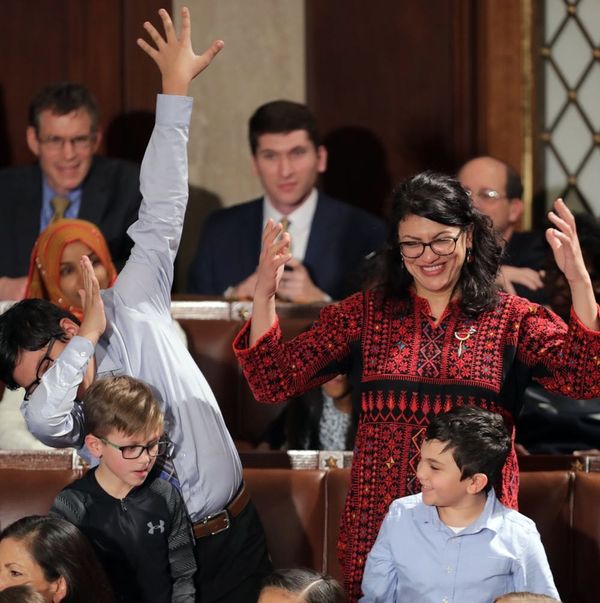 UPDATE (January 4, 2019 / 11:45 am EST): An earlier version of this article incorrectly stated that Tlaib had sworn in on a Quran that had belonged to Thomas Jefferson. The post has been updated, and we regret the error.

With the swearing in of the 116th Congress on Thursday, January 3, the congressional elects who helped make 2018 a “year of the woman” have been inducted into the halls of power in Washington, DC. And with more than 100 women sworn in, US politics witnessed dozens of history-making firsts.

Along with Ilhan Omar, Palestinian-American Rashida Tlaib is one of the first two Muslim women to be elected to the House. The representative from Michigan had initially planned to take her oath of office using a Quran that was owned by founding father Thomas Jefferson.

“It’s important to me because a lot of Americans have this kind of feeling that Islam is somehow foreign to American history,” Tlaib told The Detroit Free Press in December. “Muslims were there at the beginning. … Some of our founding fathers knew more about Islam than some members of Congress now.”

Tlaib ultimately decided against using Jefferson’s Quran and instead used her own, the Detroit Free Press reported Thursday.

Jefferson’s Quran was translated by George Sale in 1734, part of a two-volume translation that resides in the Congressional Library. Although no religious text is mandatory for the swearing in of new congresspeople, the symbolic gesture is one that many members of Congress opt into to mark their first day in legislature.

Tlaib also wore a traditional Palestinian garment called a throbe during Thursday’s jovial first session of Congress. The garment — often hand-embroidered — features designs emblematic of the wearer’s family history. In Tailb’s case, her throbe was handed down by her mother, and features design elements that relate to the family’s ancestral home in Beit ‘Ur al-Foqa, near Ramallah.

Although Tlaib’s mother wasn’t with her in Thursday’s session, new congresspeople are often joined by their families when they take their oaths of office. Tlaib’s two young sons stole the show as they dabbed in celebration alongside their mother for her historic first vote in the House.

2019: one of the first 2 muslim women in congress just cast her first ever vote and then her sons dabbed pic.twitter.com/jyVy9H5aJH

As for Tlaib’s choice to use a Quran, she says it was political and not necessarily religious. “I believe in secular government (and) my swearing in on the Koran is about me showing that the American people are made up of diverse backgrounds and we all have love of justice and freedom,” she told the Detroit Free Press in December. “My faith has centered me. The prophet Mohammed was always talking about freedom and justice.”

Kat Armstrong
Kat has been a writer, social media maven and mom for longer than she's willing to admit. She's also spent time in front of and behind the camera, interviewing celebs, politicians and acting as a producer for fashion and artistic photography shoots. When she isn't writing for various orgs and publications, she's hanging with her kids, husband and French Bulldog, Peter, in Toronto, Canada.
Inclusivity
Politics
Inclusivity Politics