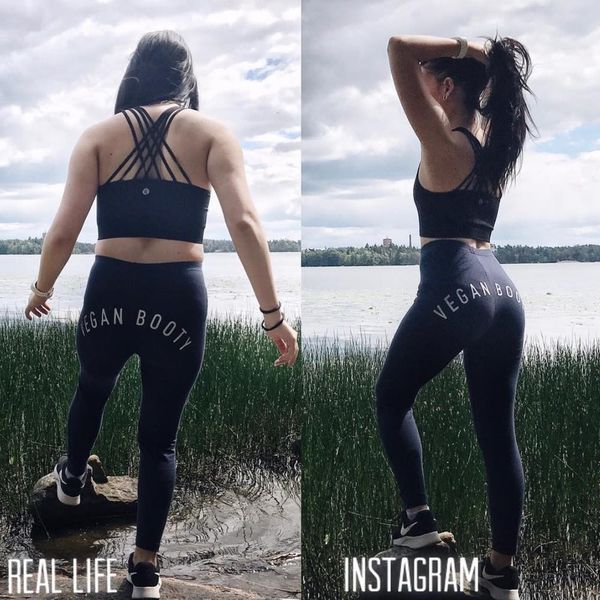 It can be hard to tear your eyes away from all the fitness gurus you see popping up in your Instagram feed. However, things aren’t always what they seem, and now one fitness ‘grammer is proving that all those before and after shots you see on social media aren’t all they’re cracked up to be.

Instagram vs real life 💁🏼🌿 If I saw the photo on the left a year ago I would've instantly thought so negatively about my body, that all my hard work from working out was non existent, that if someone looked at me they would've never thought I've been working out for 2 years and think I wasn't trying hard enough. But the thing is is that all bodies look different. Nobody's booty looks round and peachy from all angles. Nobody's body looks the same from all angles. Don't eat less or miss out on your favorite meals/drinks or over exercise to "look good for a holiday" or to "look good in bikini photos" because there will always be angles that are "unflattering" that might make you feel bad when you see them. Instead workout and eat healthy because it makes you feel good, not as a punishment. Start loving and accepting your body at all angles with all your "flaws", instead of trying to fit into societies image of 'beauty' because that image isn't inclusive of all individuals, which is so messed up. Don't hate yourself just because of bad photos, they do not define you as a person. You look the best when you're living life to the fullest and happiest. There's no point in missing out on things and stressing yourself out so much. Life isn't meant to be a competition on who can look the best and we should normalize not having to "look perfect" all the time because it's a ridiculous concept. You are perfect the way you are 🌴☀️ ------------------------------------------ . . . #instagramvsreallife #beforeandafter #lawofattraction #bodypositive #bekindtoyourself #lifeisgreat #dowhatyoulove #veganbooty #youareenough #progressnotperfection #bodyimage #vegansofig #girlswhoworkout #selflove #youarebeautiful #veganfitness #loa #fitnessjourney #bopo #bodyacceptance #bodyconfidence #effyourbeautystandards #bepresent #justbe #moderation #balanceddiet #staypositive #thinkpositive

Sara Puhto, a 20-year-old fitness blogger from Finland, posted a photo that at first glance looks like one of the ubiquitous before and after snaps — but in reality, the time span between the two photos is only a few seconds. In fact, it’s all the magic of angles.

In the caption, she wrote: “Nobody’s booty looks round and peachy from all angles. Nobody’s body looks the same from all angles.” Instead, Puhto writes, you should focus on “loving and accepting your body at all angles with all your ‘flaws’…Don’t hate yourself just because of bad photos, they do not define you as a person. You look the best when you’re living life to the fullest and happiest. There’s no point in missing out on things and stressing yourself out so much.”

Photoshop vs reality 🌿 I wanted to post this because the other day I saw an instagram post by a celebrity who had clearly photoshopped their body to make it look more curvy (the tiles behind them were curved). I'm not gonna name anyone because I don't want anyone to come at me, but I see tons of people do this. I know people always talk about this and I know there's nothing I can do to change it. All I want is for people to know not to ever feel bad about their body when looking at someone else. I used to feel this way and always wanted a more curvy waist like you see all over social media now a days. But it's silly to want that. It takes 30 seconds for me to photoshop this image on the right on a free app, but it can take someone a lifetime hating their body and wishing they had what all these photoshopped bodies look like. Please don't wish you had someone else's body. Love the body YOU have because there's nothing wrong with it. There's no point in wasting time wanting to look like someone else because the reality is that everyone is different and you will never have the same body as someone else. Start embracing everything you used to feel bad about. The beauty industry strives off our insecurities, and only shows so few body types, please don't let this make you hate yourself. Because being you and having confidence is what makes you beautiful, not what some beauty magazine portrays as beautiful. I hope you all have an absolutely amazing day, you deserve it! 🌴☀️ PS: excuse the clothing choice, I was feeling cute while trying on bikini bottoms while packing 😂 ------------------------------------------ . . . #photoshop #lawofattraction #bodypositivity #bodyshape #lifeisgreat #dowhatyoulove #bootybuilding #beautytips #beautyaddict #progressnotperfection #bodyimage #sweatwithkayla #bikinibody #vegansofig #girlswholift #girlswithmuscle #weightlifting #selflove #youarebeautiful #fitnessmotivation #screwthescale #weightlossjourney #beyou #beconfident #selfconfidence #embraceyourself #manifest #flaws #confidence

It’s not the first time the fitness-loving influencer has used her platform to dispel Instagram body myths. Earlier this month, she posted a side-by-side of the same photo, one that was the original and another that had been retouched. And her point was this: “It takes 30 seconds for me to photoshop this image on the right on a free app, but it can take someone a lifetime hating their body and wishing they had what all these photoshopped bodies look like.”

She also cautions, “Please don’t wish you had someone else’s body. Love the body YOU have because there’s nothing wrong with it. There’s no point in wasting time wanting to look like someone else because the reality is that everyone is different and you will never have the same body as someone else.”

What do you think about these “before and afters?” Tell us @BritandCo!

Shea Lignitz
Shea can be found in the nearest bookstore or brewery, exploring the great outdoors, or blasting Led Zeppelin. She grew up in the cold and rain of Northern California's redwoods but is currently wandering around Texas.
Body Positive
Beauty News
Body Positive Fitness inclusivity Instagram
More From Beauty News