This Plus-Size Yogi Will Give You Serious Fitspiration 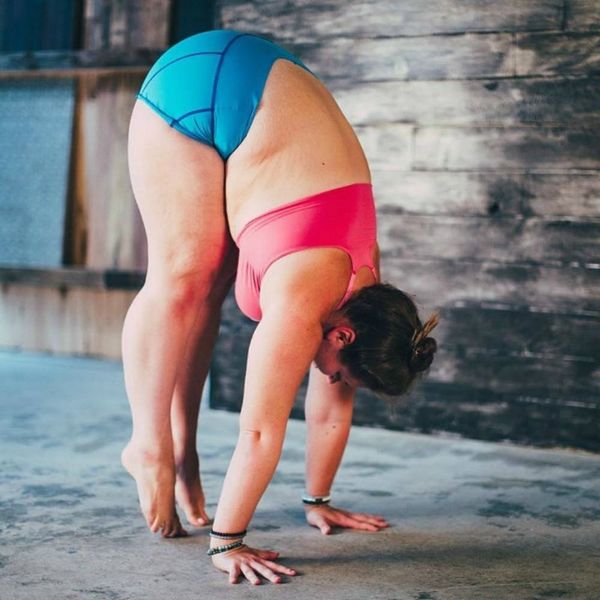 After struggling with depression, binge eating and body issues for years, Dana Falsetti had no idea that an advertisement for a student discount at a yoga studio would completely change her life. Today, she’s two years into her yoga practice and her fire for body positivity is blowing up social media with her 150,000 plus Instagram followers. Dana and her teaching partner, Jessamyn Stanley, are saying no to body shaming in a big way — and are well on their way to making 2016 the year of body positivity. We sat down with the inspirational girl boss herself to chat about her game-changing ideas on fitness and inclusivity, plus a few tips to get you started on your own self-love regimen.

B+C: You are an advocate of the idea that yoga is for everyone. Can you explain your thoughts on that a bit?

DF: When I started practicing yoga, I felt very limited in my body, and that was something that wasn’t just evident in my yoga practice, but was evident in my entire life. I was sort of convinced that a lot of these poses I was seeing other people do in the classes I was going to, or on Instagram were just not going to be possible for me because of my body.

But as I continued to practice, I kept reaching these points where things I was very sure weren’t going to happen were starting to happen, and that’s when I realized — after years of thinking otherwise — that my body was not the thing that was stopping me from doing this, or really anything else. As I started sharing that experience and the community started to build on Instagram, I realized that there were so many other people who were experiencing that exact same thing that I was feeling.

Yoga for me is a practice of non-attachment. I see bodies as totally transient things — they change all the time, every single day, whether we want them to or not. What your body looks like is not a deciding factor in whether or not yoga practice is available to you. It’s important to me that people know that and people feel like it is an inclusive community.

B+C: How important do you think it is for the next generation to see people like yourself advocating for body positivity and healthy living?

DF: I think that it is important to hear that voice on social media, for sure. When I started posting, I had no idea that this year was going to be ‘the body positive year.’ It was a lot of really good timing for me and it has been amazing to see how it has snowballed over the last year into really this entire movement.

This is the kind of dialogue that needed to be happening when I was growing up, the thing that I needed to see when I was a teenager and that really could have probably saved me from years of binge eating and the ups and downs with trying to lose weight and gain weight. It looks different for everyone. It’s not necessarily a body issue for everybody, but in terms of vocalizing that voice, I think it’s really impactful.

B+C: I think a lot of us struggle with being self-conscious when we are working out, whether that’s at yoga or at the gym or even just running outside. Have you dealt with this in your journey, and how have you combatted it?

DF: Absolutely. I’m at a point now where I don’t feel that way anymore, but most of my life I did. I never would have gone out and run in anything. Ever. But everyone is insecure and everyone has the same negative thoughts.

It’s kind of funny, as soon as I realized that we are all sharing the same insecurities, it helped mine go away a lot. Being insecure is something that I have experienced my entire life, including when I started practicing yoga. I was always the biggest person in the room (I’m still usually the biggest person in the room) and it can be discouraging if you let it. But there will always be an excuse if you want there to be, so at a certain point, you have to just do it because you want to do it.

B+C: What is your favorite pose?

DF: My favorite pose changes all the time. It’s usually just whatever pose is sort of the focal point of my practice. Lately it’s been the forearm balance. It’s one that I absolutely never thought I was ever going to be able to do. Even as I was getting stronger in my practice, it seemed like a very elusive pose, and as it started clicking for me, I just got addicted to it.

B+C: Is there anything you think that popular yoga clothing companies can do to make yoga more accessible to everybody?

DF: Yeah, they can definitely show more diverse bodies. I’m at a point now where I’ve been in contact with so many different companies over the last couple of years that I’m just done with companies who are body exclusive. It always amazes me when I get emails from companies who want to do something with me, and then I look at their page, and it’s practically all skinny, white blonde women in like the exact same picture and they only go from XS to L.

For me — and I think this ties into the concept of fat phobia — these companies don’t want fat people representing their clothes. They just don’t. I am constantly getting comments, emails, Facebook messages every single day from women who are like, ‘Please tell me where you buy your clothes, I can’t find any good yoga pants that stay up on me!’ I’d like to see that change.

B+C: What advice do you have for someone who is intimidated by yoga or who’s just starting out?

DF: For me, the best advice is to just go and keep going. Because every other excuse will always pop up. I practice because it is something that I do for myself and I think that that aspect of it is so important — this idea of making time for self-care. But a lot of people don’t feel deserving and worthy of that. We just talk ourselves down so much.

So for me it’s about just continuing to show up for yourself. You have to be able to lose the expectation and just forget what everyone else has to say, or even what you’re thinking about it. You should go because it’s the best thing you can do for yourself.

Ashley Macey
Ashley Macey is a lifestyle freelance writer who loves all things fitness, wellness, and creativity. When she's not exploring her home in the Pacific Northwest with her dog Max, you'll probably find her curled up with a good book and some hot tea. Follow her daily jaunts on Twitter.
Body Positive
Health
Body Positive Fitness Yoga
More From Health