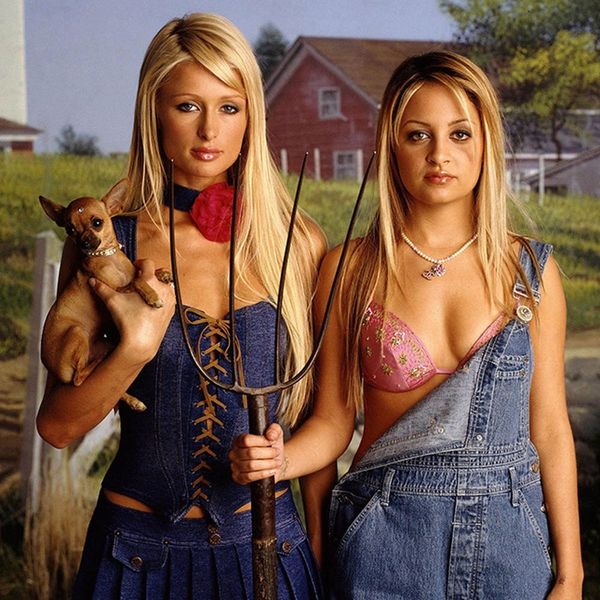 PSL season is here, and Halloween is a holiday we celebrate all year. So grab one of those fall beverages and prep some costumes while sipping it.

1. The Real Housewives: This one is ideal as a group costume. Assemble your best gals — or frenemies — pick out fab dresses, pour a goblet of wine for each of you and take the town looking glamourous and not to be messed with. Then, as the night goes on and the drinks get poured back, bicker with one another and recreate iconic moments from the series that you more than likely have stocked up on your camera roll in GIF form for texting. (Photo via Bravo)

2. Keeping Up With the Kardashians: Pick a K-name, any K-name, and get ready for plenty of selfies all night long. Complete the look by having your BFs trail you and your version of the Kardashian crew as cameramen and paparazzi. How else will you become the most-followed Instagrammers?! (Photo via Ryan Seacrest Productions)

3. Survivor: Not *that* into dressing up? You’re gonna want to tell everyone you’re going as a castaway from this CBS island staple then. Put on a bathing suit or a tattered casual look and you’re basically done. Complete the look with your own DIY immunity idol and a buff with your tribe’s name and no one will say you slacked with your costume. (Photo via CBS)

4. The Bachelor + The Bachelorette: Single and ready to mingle on Halloween? You’re gonna want to go as one of the eligibles on this dramatic reality show. Put on your best dress, maybe get more than a little buzzed and carry around a rose (or several) to pass out to suitors throughout the night. (Photo via ABC)

5. Shark Tank: Always wish you had the money of a big-time investor? For one night you can make that a reality. Dress up in your best business-professional attire and make people pitch you their ideas all night long. The drunker you get, the more entertaining they’ll become. (Photo via Shark Tank Facebook)

6. Big Brother: Looking to have a house party at your place without the need to leave? Take cues from this summer staple. Get into your best bathing suit, or just keep your comfy house clothes on, manipulate some of your friends to come over in similar attire and play mind games with one another until the sun comes up. (Photo via Cliff Lipson/CBS)

7. RuPaul’s Drag Race: Have your best guy friends take cues from their fave drag queens from the LOGO series. If you’re interested in an edgy look as well, go as a drag king and everyone will definitely be turning as they do death drops in their head to your dramatic outfit. (Photo via Mathu Andersen/Logo TV)

8. The Voice: Make people sing to you all night long, then judge them. Sounds like an entertaining night to say the least. Go the NBC music show route and DIY a red chair to turn around in or take the American Idol judge lane (do a throwback to an original judge in honor of the final season of the series), carry around a signature Coke cup all night long and offer up your thoughts on acapella tunes as you see fit. (Photo via The Voice Facebook)

10. Dancing With the Stars: If you know the foxtrot, the tango, the cha-cha, etc. and you LOVE a gown you can twirl in, then this is the look for you. Grab a partner to dance with all night long and your fellow partygoers will more than likely be ready to hand over a mirrorball trophy to you two before the sun goes up. (Photo via Dancing With the Stars Facebook)

11. Top Chef: Though you totally could look fab and just eat food all night by going as Padma or Gail, why not go the more fun route as a contestant?! Find a fun chef’s coat (hat required), get creative in the kitchen and then have everyone judge your plates at that house party you’re attending. Fingers crossed you won’t have to pack your knives and go. (Photo via Bravo)

12. Catfish: Feel like you’ve gotten catfished? Have you catfished anyone? Just super infatuated with Nev Schulman? Visualize the show IRL by going as the catfish catcher or dress up as a catfish to be caught. THAT look will definitely provide some LOLs that might just lead to questions about figuring out if you actually are who you say you are, so be careful. (Photo via Catfish: The TV Show Facebook)

13. Project Runway: Make it work in an outfit that Heidi Klum or Tim Gunn would approve and wear. Or dress up as your fave designer — sketches and all — and slay all the Halloween costume competition. (Photo via Project Runway Facebook)

14. The Amazing Race: Wanting to go with an athleisure look for Halloween? Then this is the ultimate choice for you. Jump into gym clothes and sneakers, throw a backpack on top and pretend like you and your costume partner are racing all over the world finding clues and completing tasks while barhopping. (Photo via CBS)

15. Rich Kids of Beverly Hills: For this one, all you’ve gotta do is pull that designer outfit out from the depths of your closet, take lots of selfies and stay on social media all night long. You could essentially do this from your bed and make it look like you’re having the time of your life. Why not try it out? It sure would be comfy ;) (Photo via Matthias Vriens-McGrath/E!)

16. Real World: While this MTV classic has long worn out its welcome, that doesn’t mean you can’t throw it back to the glory days and bring an iconic character to life. If this housebound show wasn’t your fave, try out one of the network’s other shows, Road Rules, by hopping on a RV for the night and tackling challenges at every party you swing by. (Photo via Real World Facebook)

17. Jersey Shore: Fist pumps all night long are required! And so is dancing with a juicehead, a pouf hairstyle and a massive tan (spray or not). You’re gonna be in for an unforgettable night with this look. JK, you’ll probably forget the entire evening after blacking out ;) (Photo via MTV)

18. The Simple Life: This costume will have everyone shouting, “That’s hot!” Mix your couture with some basic attire, keep a sarcastic yet airhead appearance throughout your Halloween visits and you’re sure to have a hilarious night. Especially if you start singing “Sanasa.” (Photo via Twentieth Century Fox Television)

19. Laguna Beach: If you don’t go as LC, are you even living your best Laguna Beach costume life?! Wear a tank, cut-up jeans and sandals and you’ll be feeling like you’re an OC girl even if you don’t live in the SoCal city. Want to not feel like a high schooler for the evening? Then go for a look straight from the other shows in the Laguna Beach universe, The Hills or The City. (Photo via MTV)

20. Toddlers + Tiaras: You know you’re a pretty, pretty princess, so dress up like one (a tiny one) for an evening. Place a crown on your head, get your hair super voluminous and slip into the brightest, blingiest gown and you’re ready to be the belle of the ball. Just remember to have a go-to talent to present when someone asks you to perform it. (Photo via Toddlers + Tiaras Facebook)

Need even more inspo?! Dress up like the Supernanny, throw on a trucker hat to pull off Ashton Kutcher’s casual PUNK’d appearance or go rugged with a Running Wild With Bear Grylls-inspired look. Really, just scroll through your TV’s channel guide and you’re sure to find plenty of Halloween costume ideas courtesy of reality TV.

Will you be dressing up as a reality TV star this Halloween? Let us know which one(s) in the comments.