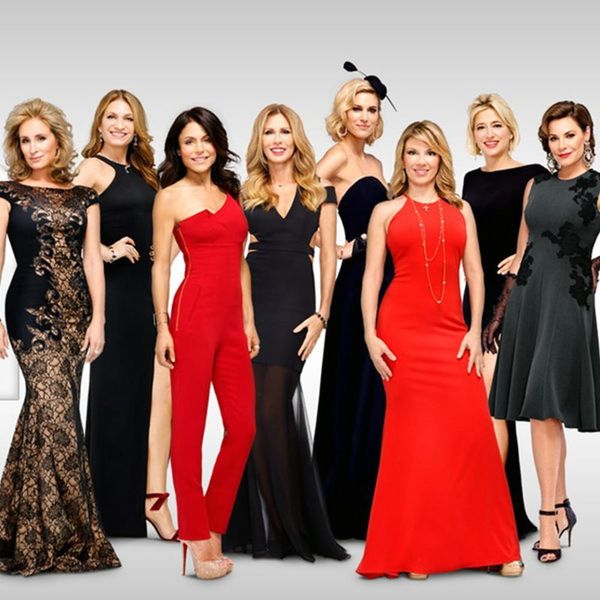 HALLOWEEN! It’s all we’ve ever wanted. Seriously, we wish we could celebrate the dress-up holiday every single night.

1. Scream Queens Cast: If you always wanted to be in a sorority but never rushed, OR if you’re a current/former sister, you’re gonna definitely want to take your sorority sister pride to a demented level by dressing up like this cast. Throw on your fave preppy pink attire, splash some blood on those tops and bottoms and get to screaming. (Photo via Scream Queens Facebook)

2. Inside Out Cast: Whether you’ve seen this Pixar movie that takes a peek inside our brains or not, you can’t help but want to dress up as these emotions. Grab your BFFs and feel all the feels by getting into one of these colorful character looks. (Photo via Brit + Co)

3. Empire Cast: Pro tip: Claim Cookie so you can steal the show from your group ;) (Photo via Empire Facebook)

4. Full(er) House Cast: Raid the nearest thrift store to fill out these early-’90s looks and everyone will be shouting, “You got it, dude!” to you and your crew all night long. (Photo via Full House Facebook)

5. Taylor Swift’s “Bad Blood” Squad: If you’re not feeling these apocalyptic looks but still want to rep T.Swift for Halloween, just become the singer in a different outfit and have your group all be special guests that have popped up throughout the 1989 Tour. (Photo via Brit + Co)

6. Ghostbusters Cast: Who you gonna call? Your girlfriends to dress up as the exterminators and kill it at your Halloween party. (Photo via @paulfeig)

7. Jurassic World: Your group is probably gonna fight to play the role of Chris Pratt. But don’t knock the raptors — they can be a totally fierce, fun costume, too. (Photo via Universal)

8. Fifth Harmony: Get matching, color-coordinated outfits, learn some dance moves and give your hair major volume. The resulting five flawless figures’ appearance will totally be worth it. (Photo via Fifth Harmony Official)

9. Orange Is the New Black Cast: Pick up a bulk khaki jumpsuit collection for you and your friends, get some temp tatts and you’ll be looking ready to conquer Litchfield all night long. (Photo via Netflix)

10. Unbreakable Kimmy Schmidt Cast: You could totally go as the Mole Women, but it would be way more fun and colorful to go as Kimmy, Titus and Jacqueline. Got more gals in your posse? They can go as landlady Lillian or Jacqueline’s stepdaughter Xanthippe. (Photo via Netflix)

11. Katy Perry + the Super Bowl Sharks: Whoever gets to be Left Shark wins the night before it even gets started. (Photo via Christopher Polk/Getty)

12. Minions: Paint yourself yellow and throw on some overalls. Done + done. (Photo via Minions Facebook)

13. Pitch Perfect 2 Cast: You technically don’t have to sing acapella numbers all night long if you and your crew dress up as the Barden Bellas or Das Sound Machine… but you totally should. (Photo via Pitch Perfect 2 Facebook)

14. Real Housewives: Pick a city, any city, throw on a fab gown and playfully (or seriously) bicker with your girls all night long while tossing back cocktails. Go even crazier with a Housewives-inspired group costume by going as The Real Housewives of Disney from SNL or The Hotwives of Las Vegas. (Photo via Real Housewives of New York City Facebook)

15. US Women’s National Soccer Team: Who wouldn’t want to dress up as this badass, World-Cup-winning team?! Get matching uniforms, throw on some shin guards for fun, toss a gold medal around your necks and you and your crew will be ready to party. (Photo via US Soccer Facebook)

16. American Idol Judges Then + Now: While you could totally go as Idol‘s current judging lineup, take it back to the beginning and make appearances as Simon, Paula and Randy. Or just get a huge crew together and turn it into one big judging panel including Ellen, Mariah, Nicki and even season one host Ryan Dunkleman. (Photo via Kevin Winter/Getty)

17. The Wiz Cast: In honor of NBC’s live musical this fall, give your group’s Wizard of Oz-themed costume a different feel with the stage version’s take on the classic characters. (Photo via Universal)

18. TODAY Show Anchors + Wrangler: If you don’t want to head to any Halloween parties sans pup, then this is the group outfit for you. Grab your GFs and their BFs and entertain everyone with your headline news and a seriously OTT cute dog. (Photo via Today Show)

21. Mad Max Cast: Cut up some tees and dresses, throw some dirt on your body and this apocalyptic costume will be complete. (Photo via Mad Max Facebook)

22. Star Wars Cast: We’re sure you’re pumped for this sci-fi flick, so get all decked out for its release by dressing up as the iconic and soon-to-be-iconic characters this year with your BFFs. (Photo via Star Wars Facebook)

Will you be dressing up with your group of friends with any of these looks? Are there any looks you’re dying to recreate that we missed? Let us know in the comments.