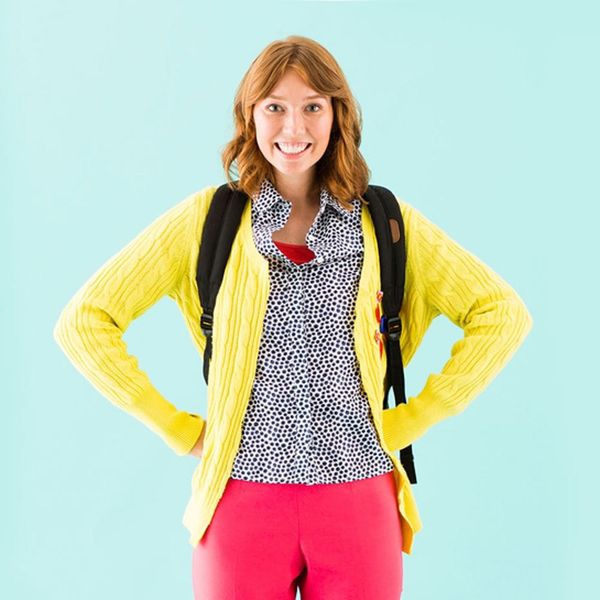 Everyone is a little guilty of celebrating cancelled plans and spending some QT with Netflix. But when Halloween rolls around, it’s time to get those creative juices flowing to make sure the costumes (and everything else) are ready for the party. It turns out that all of that time spent with Netflix paid off — combining your love for your shows with the best holiday around can make for some seriously spot-on costumes.

2. Doug Funnie and Patti Mayonnaise, Doug: It’s a bird; it’s a plane; it’s Quail Man! And if you’re going for a group costume, throw in Skeeter, Roger and your pup Porkchop. (via Miss Bizi Bee)

3. Kimmy Schmidt, The Unbreakable Kimmy Schmidt: Take a break from your Netflix binge and get in touch with your Kimmy Schmidt side. Hashbrown no filter. (via Brit + Co)

4. Real Housewives: Put on your best dress, pop a bottle and sharpen your claws for this costume. (via Brit + Co)

5. Lucy Moran and the Log Lady, Twin Peaks: We’re all anxiously awaiting the day that our favorite David Lynch masterpiece returns to our television screens. What better way to celebrate the comeback of Special Agent Dale Cooper than these costumes? (via Buzzfeed)

6. Eliza Thornberry, The Wild Thornberrys: Eliza has a pretty sweet life — her family has a wildlife show and she can talk to animals. What more could you want, really? This costume is totally safe for the office, and bonus points for bringing your pup along! (via @hopiechan)

7. The Golden Girls: You have to admit, those sequins are just too good to stay in the closet or thrift shop. The only problem is deciding which badass grandmother to emulate. (via A Beautiful Mess)

8. Sheldon and Amy, The Big Bang Theory: Nerds unite! Grab your best graphic tee, colored tights and polish your eyeglasses. You’ve got people to correct and trivia night to conquer. (via @abigailandwhimsy)

9. Dexter and Dee Dee, Dexter’s Laboratory: This Cartoon Network favorite is perfect for a nostalgic couple (or even a brother and sister!) (via Cosplay Daily)

10. Dominique Devereaux, Dynasty: Feeling fabulous this Halloween? Dress to the nines and rock some faux fur. Won’t it just knock your socks off when they find out you’re a Carrington? (via @tillytakespictures)

11. Elaine Benes, Seinfeld: All this costume requires is a loose floral dress, modest heels, a blazer with shoulder pads and the worst dance moves of all time. Totally doable, right? (via Theme Me)

12. Fraggle Rock: Bring back the nostalgia (and keep it super comfy) with this classic ’80s throwback. (via Brit + Co)

13. Rachel Berry, Glee: Take yourself to a pre-Scream Queens Lea Michele and randomly break into song all night. Rachel Berry forever. (via Theme Me)

14. Arrested Development: Good luck choosing your favorite costume-worthy Bluth! And if you decide to go as Buster, don’t forget your marksmanship seal and sand-racing gorilla. (via Moss and Mint)

15. Ms. Frizzle: Hop on the Magic School Bus with this zany costume perfect for redheads. (via Brit + Co)

16. In Living Color: Channel this classic ’90s sketch comedy with your best #TBT threads. (via @__dem_shortcake__)

17. Jessica Day, New Girl: All you need is a fit and flare dress, wavy hair and your best corny jokes. Who’s that girl? It’s Jess! (via @candisbadg)

19. Peg Bundy, Married With Children: Because any woman that can deal with Al Bundy deserves a Halloween costume. (via hmmmbymel)

20. Rayanne Graff, My So-Called Life: Angela Chase’s troubled BFF had some major friendship faux-pas (Jordan Catalano, anyone?), but her ultimate ’90s-girl fashion is definitely something for the books. (via Ramona Forever)

21. Angela Chase, My So-Called Life: Between the latest Delia’s catalog and Claire Danes, every ’90s girl had some serious fashion envy going on. Get comfortable in pre-teen fashion with flannel, layered dresses and Doc Martens. (via @jacquelinealana)

22. The Powerpuff Girls: Chances are, you probably had at least one Powerpuff Girls sticker on your trapper keeper. Why not take a trip down memory lane this Halloween with two of your best gal pals? (via marvelgirl2010)

23. Punky Brewster: Before Clarissa Darling, there was Punky Brewster. Even Punky Brewster herself had to revisit her iconic look years later. Now that’s a Halloween costume. (via @MoonFrye)

24. Star Trek: Star Trek costumes are kind of like the cat costumes of the sci-fi world — classic and always a good go-to. (via io9)

26. That’s So Raven: Disney Channel sitcoms just ain’t what they used to be. This Raven costume is spot-on and hopefully free from futuristic shenanigans. Oh, snap! (via @ashian.burton1)

27. Kelly Kapowski, Saved By The Bell: Everyone in the ’90s was in love with K. Kapow. Relive the girl crush with those iconic stonewash jeans and your finest crop top. (via @jacquelinetaylorkeating)

28. Two Broke Girls: This BFF-worthy costume is perfect even if you don’t work in the service industry. (via @gbelzile)

29. The Walking Dead: Pumped about the return of TheWalking Dead? So is Modern Family‘s Sarah Hyland! You don’t need much for this costume — just go with some torn clothing, a little makeup and a gnarly fake weapon or two. (via @therealsarahhyland)

30. Jem, Jem & The Holograms: This show had every ’80s girl dreaming of starting a rock band. And any excuse to rock a pink wig makes for an A+ costume. (via Deviant Art)

31. Lucy, I Love Lucy: If you decide to dress as the legendary Lucille Ball for Halloween, you have to do it right. Don your best red lipstick, practice your dramatic faces and rock those polka dots. (via The Fiercest Lilli Putian)

How are you channeling your favorite shows into your Halloween costume? Let us know in the comments!