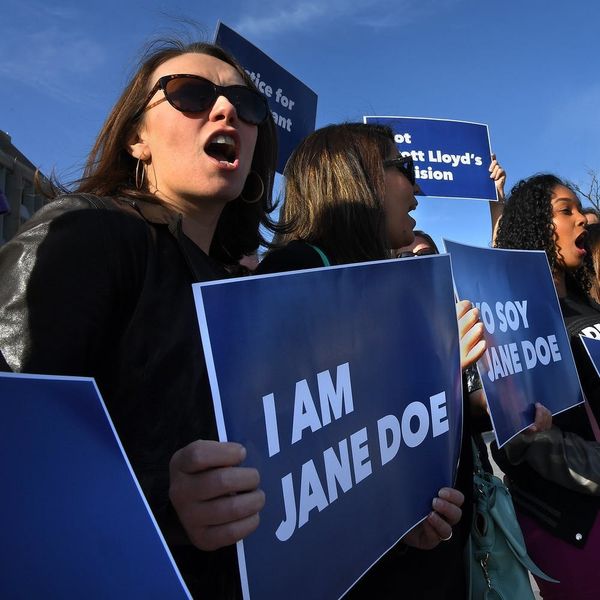 Content advisory: This article contains factual information about sexual violence against women and girls that might be particularly sensitive for some readers.

In June, President Trump signed an executive order appearing to end his policy of separating migrant families at the border in an effort to deter undocumented immigration. But questions remain, such as whether and how families will be reunited, how the executive order will affect migrant children’s living conditions, and, especially amid reports about the prevalence of sexual abuse at detainment centers, why we’ve yet to see or hear about separated migrant girls.

The issue of violence against migrant women and girls has also begun to raise questions about their reproductive rights. One border patrol official spoke to the Associated Press about the increasingly common phenomenon of migrant girls as young as 12 put on birth control pills “because they know getting violated is part of the journey.”

In consideration of widespread sexual abuse both en route to the US border and at shelters, pregnancy caused by rape is a serious concern for immigrant women and girls — especially due to the Trump administration’s troubling history of trying to block abortion access for undocumented minors without an exception for rape. The attack is two-fold, striking at their identities as women — often even underage minors — and immigrants, and functioning to dehumanize them.

On June 4, the Supreme Court appeared to side with the Trump administration in this goal by ruling to override a Washington DC Circuit Court’s ruling from March, which ordered Trump officials to cease in their repeated attempts to block undocumented minors from getting abortions over the past year, and offered class-action status to undocumented minors seeking an abortion.

Lawyers for Attorney General Jeff Sessions have repeatedly argued that undocumented minors from other countries lack the right to get an abortion in the US except in cases of medical emergencies because, as they put it, these girls don’t have the same rights as citizens. It’s important to understand the implications of this argument.

Internal emails among officials from the Office of Refugee Resettlement reveal how Trump officials have repeatedly refused to allow undocumented teens seeking an abortion to leave detainment centers for the procedure, and even attempted to stop a medication abortion that was already underway. (Medication abortion requires taking two separate pills, with the second taken between six and 48 hours after the first.)

The denial of abortion access has always centered around dehumanizing women in favor of humanizing fertilized eggs and fetuses instead. It’s about denigrating born, living women to a lesser status than the mere idea of a child. It’s about reducing women to second-class citizens, by authorizing the government to force them to give birth. And for immigrant women, it’s also about reminding them the fundamental rights they have, even over their own bodies, are vastly different from those of citizens.

It’s estimated that six in every 10 women and girls are raped, and as many as 80 percent of female Central American migrants are sexually assaulted en route to the US. Earlier this year, The Intercept reported that 1,224 sexual abuse complaints were filed at immigrant detainment centers between 2010 and 2017, just 43 of which led to investigations. Recently, Reveal News reported that the shelters holding migrant minors separated from their parents have long histories of sexual abuse of detained women and children.

Denying detained migrant women access to crucial health care like abortion — especially when their status renders them particularly vulnerable to unwanted pregnancies — adds another dimension of cruelty to the violence they are likely to face.

If President Trump’s language about immigrants — including referring to immigrants involved in gang-related crimes as “animals,” arguing that “they’re not human beings,” and claiming they “infiltrate our country” to commit rape and murder — shows us anything, it’s his goal to equate immigrants to violent animals, and attack perceptions of them as human. And in the Trump administration’s legal battle to deny migrant girls abortion access, officials have built their case around the idea that non-citizens lack the same fundamental human rights as citizens — essentially codifying the president’s dehumanizing rhetoric into dangerous policy.

This agenda affects the perceptions and rights of all immigrants and undocumented people, but it’s critical to note that women and girls are disproportionately impacted.

Long before this administration launched its crackdown on migrant women’s human rights, immigrant women and women of color have always faced disproportionate challenges to their reproductive rights. There’s a long history of language, economic or other barriers barring immigrant women and girls’ access to contraception and sexual health education. Lack of legal abortion in the US made self-termination attempts and the high risk of injury that went hand-in-hand with these attempts rampant, and low-income immigrant women were disproportionately affected.

Today, even severe restrictions on abortion continually fail to lower the abortion rate; rather, they solely increase the risk of unsafe abortion and injury, helping propel the US to have the highest maternal mortality rate in the industrialized world. That said, policing migrant women and girls’ access to abortion is about so much more than the typical policy debates concerning immigration and women’s rights. It’s about the frightening safety and living standards that immigrant women are being subjected to as a result of US immigration policy decisions.