How This Couple Turned Their Wedding into an Epic Rock Opera 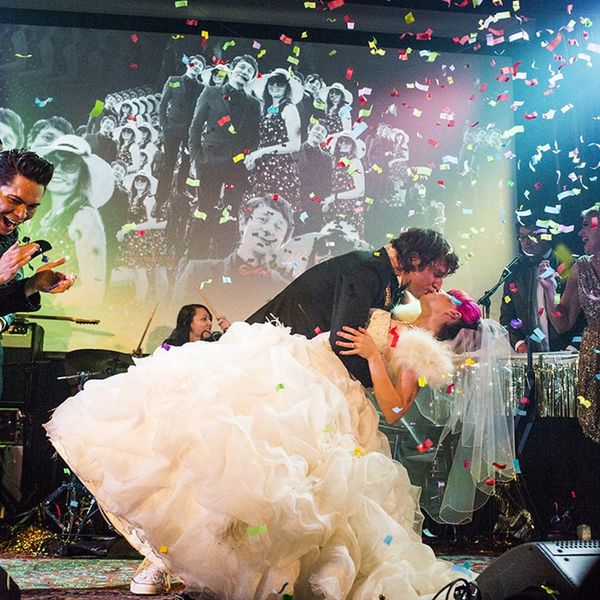 Musicians Rebecca Bortman and her (now) husband Bryan Garza first met in 2012 at the iconic San Francisco music venue Bottom of the Hill. Two years later, Bryan pulled off an epic proposal at the exact same spot by performing Elvis’s classic song “Can’t Help Falling in Love” live on stage. Obviously, Rebecca said yes (and now they have the best engagement story ever). So, what happens when two ultra-creative musicians start planning a wedding together? It turns into a rock opera.

When Rebecca (the leader singer of the band Happy Fangs) and Bryan (the lead singer of Scissors for Lefty) began to brainstorm how they wanted to tie the knot, Rebecca tells us, “We wanted to get back to songwriting after we got engaged, since that was our original premise.” She recalls saying to Bryan, “Why don’t we sing songs and make it an awesome concert?” And Bryan, being even more theatrical than she is, replied, “What if we did a rock opera?” Rebecca admits she was tentative about the idea at first, as she didn’t want the most memorable day of her life to turn into a cheesy high school musical. But with a lot of planning the couple was confident they’d be able to nail the concept.

Speaking of planning, there was A LOT of it. The two pulled this off in 10 months’ time, but Rebecca tells us that meant doing little of anything else. The rock opera was about an hour long and consisted of eight original songs (listen to a few here), all performed at the SF-based music venue The Chapel (the name is a charming coincidence). They recruited their bandmates’ help and even hired a stage manager as opposed to a wedding planner. All in all, Rebecca tells us there were 20 people in the show and about 12 more who helped with other aspects of production.

The hardest part to pull off? Rehearsals. Rebecca’s bridesmaids (who were also her backup singers) were all the way across the country on the East Coast. She says, “We attempted to practice a couple of time on Google Hangouts. It was hilarious to try to harmonize over that.”

While the two definitely ditched most wedding traditions, they kept one: The first look. Rebecca recalls, “That was more climactic than I thought. I thought he would just be like, ‘You look awesome!” But he told me, ‘You look like a Disney princess!’ We’d done a little bit of the traditional thing in that he’d never seen me in my dress, and so when he turned around it definitely had an impact.” And after that, it was showtime.

As Rebecca and Bryan’s 350 guests (!!) filled the venue, they were greeted with finger food, drink tickets and even a poster from the show. It started as a traditional wedding does, with a wedding processional. Then the performance began. The story of the rock opera follows the way they met and fell in love. She says, “The way we wove it into being more of a theatrical performance is we’d start with a song we’d written, and then to get to the next song, we’d have different people from the bridal party introduce it.” At one point their mothers got up on stage and told embarrassing stories about them and later their dads channeled Statler and Waldorf (the two grumpy dudes from The Muppets) by hilariously heckling them.

The vows were incorporated in the final song as they brought things down a notch to read what they’d written for each other. But after all that was said and done, it was time for the grand finale, a donut tower and a dance party.

So, what are they doing with all that hard work now? Relishing in it for one. But also, the couple says they also want to put out a Love, Jerks album for their first anniversary, which will include songs from the rock opera. (PS Love, Jerks is the name of their band.) We’re thinking that’s a great idea… if this doesn’t get picked up by Broadway and turned into the next hit musical before then ;)

Cortney Clift
Cortney is the senior writer and special projects editor at Brit + Co. She typically covers topics related to women's issues, politics, and lifestyle. When she's not buried behind her computer you'll find her exploring New York City or planning her next big adventure.
Music
Music
Music

Why We Should Take The Time To Give Compliments Every Day