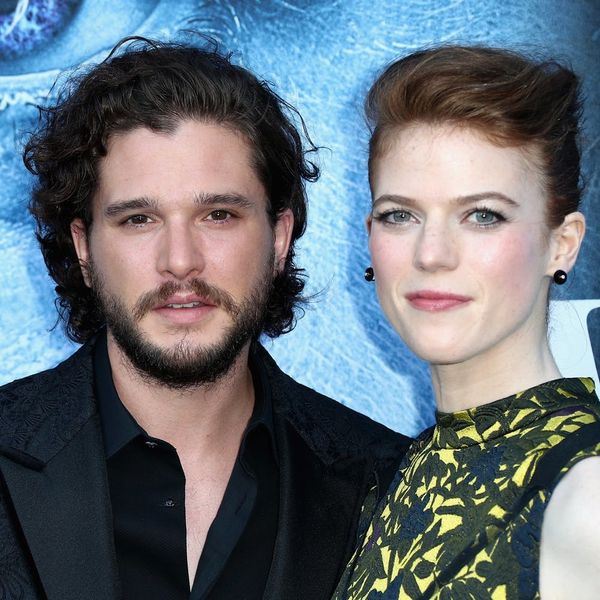 Game of Thrones fans had every reason to rejoice last month, when it was announced that on-screen lovers Jon Snow (Kit Harington) and Ygritte (Rose Leslie) had gotten engaged in real life. While Harington admitted his proposal didn’t exactly go as planned, he definitely got it right in the ring department.

Leslie, 30, was spotted at a London airport this weekend, and one couldn’t help but notice a massive and sparkly addition to her left ring finger as she clutched her luggage.

The knockout piece appears to consist of a sizable teardrop or oval-shaped diamond on a gold band with smaller green diamond-shaped stones at the sides.

The ring fit right in with the actresses’ other baubles, which included a circular medallion ring stacked atop another gold bauble. On the opposite hand, she wore several stacked yellow gold bands. While the pieces were different, to be sure, they all had a classic, dainty feel.

It appears Jon Snow DOES know something after all: his lady’s taste in jewelry!

What do you think of Rose’s new bling? Sound off over @BritandCo.

Nicole Briese
Nicole is the weekend editor for Brit + Co who loves bringing you all the latest buzz. When she's not busy typing away into the wee hours, you can usually find her canoodling with her fur babies, rooting around in a bookstore, or rocking out at a concert of some sort (Guns N' Roses forever!). Check out all her latest musings and past work at nicolebjean.com.
Celebrities
Wedding Style
Celebrities Celebrity Engagement Engagement Engagement Rings