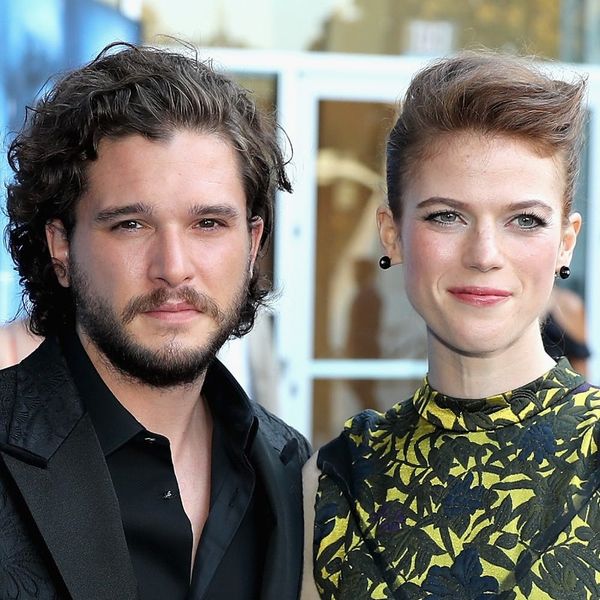 Kit Harington may be smooth enough to talk his way out of a ticket , but when it comes to his lady love, Rose Leslie, he still gets a little flustered. While visiting the set of the UK’s The Jonathan Ross Show, the Game of Thrones actor revealed that the couple’s engagement didn’t exactly go as planned.

Harington, 30, explained that after planning for a storybook proposal, he got a little bit too excited and wound up popping the question a day earlier than intended, with none of the fuss. “I did have some plans to do it, I was going to string up some lights in some trees and do all the romantic stuff.”

Instead, however, he simply followed his heart in the moment. “We were in the country and we were under this beautiful night sky and had a log fire burning and red wine.” Sounds pretty dang romantic to us!

Clearly, his bride-to-be didn’t mind, as she accepted his hand, a fact which was confirmed by their recent announcement in the UK Times.

Hopefully, however, their wedding plans (which, sadly, will NOT be GoT-themed) go exactly as Harington has pictured them, with all his fellow castmates there to share in the couple’s joy. “I rang [the producer] up and I said, ‘I’m getting married, and it’s your fault, actually…. You need to factor in a Game of Thrones wedding, by the way. They have all got to be there, so the whole [show] has got to shut down.”

We can’t wait to see the pictures from THAT reception!

Do you have a botched proposal story? Fill us in @BritandCo.

Nicole Briese
Nicole is the weekend editor for Brit + Co who loves bringing you all the latest buzz. When she's not busy typing away into the wee hours, you can usually find her canoodling with her fur babies, rooting around in a bookstore, or rocking out at a concert of some sort (Guns N' Roses forever!). Check out all her latest musings and past work at nicolebjean.com.
Celebrity Couples
Celebrity News
Celebrity Couples Celebrity Engagement Game of Thrones love
More From Celebrity News