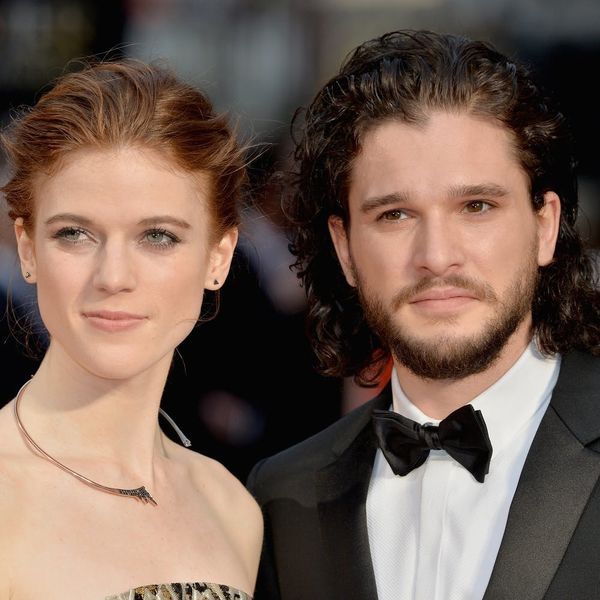 UPDATE: The couple confirmed their engagement with an announcement in the UK’s Times newspaper on Wednesday. The small, unassuming ad read: “The engagement is announced between Kit, younger son of David and Deborah Harington of Worcestershire, and Rose, middle daughter of Sebastian and Candy Leslie of Aberdeenshire.”

Jon Snow’s first love, the wildling Ygritte, may have died in an epic battle in Westeros in season four, but in real life, actors Kit Harington and Rose Leslie are still going strong. Since meeting on the set of Game of Thrones back in 2012, the former costars have remained relatively quiet about their relationship. And now, People reports that they’re engaged.

According to the magazine, which cited an unnamed source, the couple privately announced to friends and family last week that they are set to walk down the aisle.

This is not the first time they’ve been the subject of engagement rumors, though. There were also reports earlier this year after they purchased a 15th-century castle in East Anglia, England.

Although the usually low-key lovebirds tend to shy away from discussing their relationship publicly, Leslie spoke briefly about Harington in a 2016 interview, saying that one of the things that kept them bonded during filming was technology. “It’s an embarrassment of riches, I suppose, whereby when both of us are working, it’s a lovely thing to be involved and working. FaceTime is a must.”

As for Harington, when he and Leslie confirmed their relationship was back on solid ground (after a short breakup in 2015), the actor told L’Uomo Vogue that some of his favorite moments happened while they were filming “Beyond the Wall” in Iceland during season two. “Because the country is beautiful, because the Northern Lights are magical, and because it was there that I fell in love,” he told the mag, adding, “If you’re already attracted to someone, and then they play your love interest in the show, it becomes very easy to fall in love.”

While there are no other details about the pair’s reported engagement, Game of Thrones fans are no doubt hoping for something of a nod to the series if and when they eventually do walk down the aisle.

Just as long as it’s not the Red Wedding.