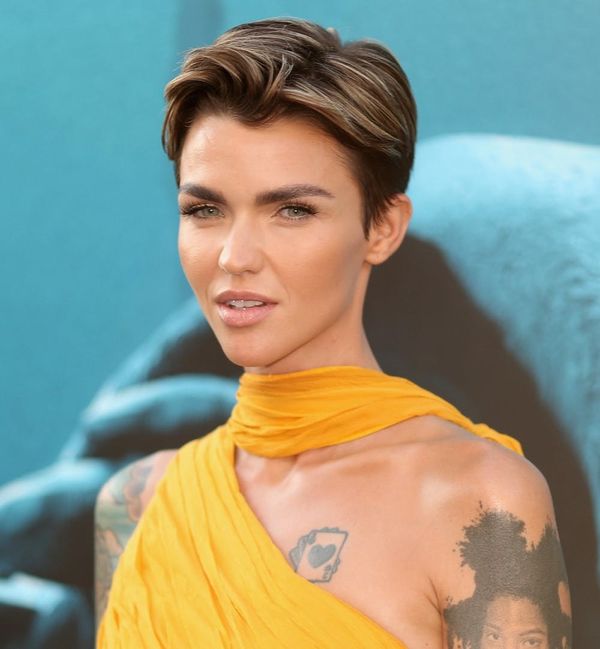 Get ready to welcome a new superhero to the Arrow-verse. Although Ruby Rose’s Batwoman won’t make her first appearance on TV until December, the CW and Warner Bros. Television released the first image of Rose in costume on Tuesday, October 9, and it’s just as fierce as we hoped it would be.

In the photo, which Rose also posted to Instagram, we see the Orange Is the New Black star in a sleek black bodysuit with a bold red bat across the front. She also sports a matching red belt, black gloves and boots, a red-tinged bat cape, and the signature bat mask, which covers her face but not her wavy red tresses. The getup was designed by award-winning costumer Colleen Atwood, who also created the superhero looks for Arrow, The Flash, and Supergirl.

Behind Batwoman, we see the gritty metropolis of Gotham City, with skyscrapers looming in the background as a bat signal lights up the dark sky.

Rose’s character — alias: Kate Kane, an out lesbian with a passion for social justice — will first appear in the CW’s DC crossover event on December 9. Greg Berlanti is also working with writer Caroline Dries to develop a stand-alone series around Batwoman, who will be the first openly gay superhero to lead a TV show.

While Rose has said that the role is a “childhood dream,” she faced backlash when the casting was first announced. Berlanti later defended the actress, telling The Hollywood Reporter, “[Ruby] is terrific in the role, and we’re excited for people to see the story.”

You’ll be able to see Batwoman in action during The CW’s crossover event on December 9 at 8pm ET.

What do you think of Batwoman’s new look? Let us know @BritandCo!