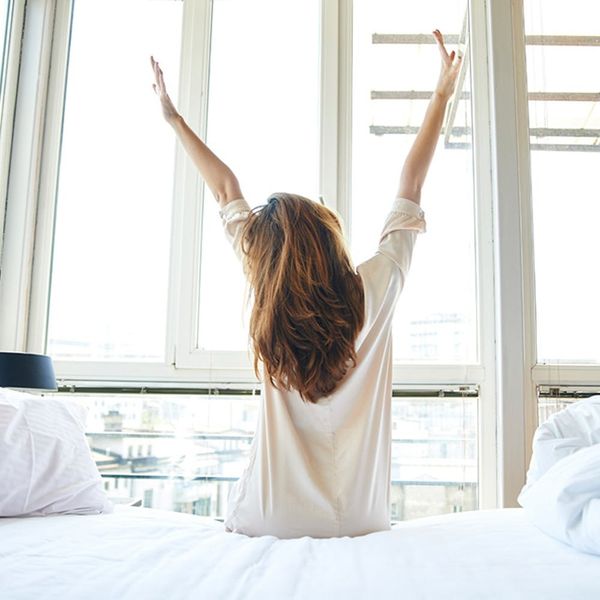 You’ve probably heard advice to move your alarm clock far away from your bed so you have to get up to turn it off — it could deter you from hitting “Snooze” from your comfy pillow. The problem is, this doesn’t actually work (and admit it — you’ve been too lazy to actually play that game.) But someone raised the bar a bit and created a brilliant gadget that might finally make you get out of bed on time. Meet Ruggie, an alarm clock moonlighting as a smart rug and one of our favorite Kickstarters of the month.

Apparently, most people hit the snooze button in the morning at least three times — you do that with your hands, though. Ruggie is a memory foam floor mat equipped with an LED digital clock display that makes you put your feet *on the ground* in order to stop the alarm. It’s a cushy pad that literally beckons you out of bed, creating a cozy morning ritual that claims to decrease the stress caused by repeat snoozing. In other words, wherever Ruggie is is the right side of the bed.

And no, you can’t just reach down and tap it; Ruggie requires three seconds of pressure to shut off. To top it off, once it knows you’re awake, it’ll play you a customized speech! Time for that #RiseandGrind monologue. Prepare to get focused while you stretch with motivational words, reminders to call Mom or your favorite fitness phrases. Think of it as your reward for waking up.

By forcing you out of bed and onto your feet — literally — this tech gadget hopes to stimulate morning routines, yielding healthier, more productive humans everywhere. Citing examples of early risers like Elon Musk, Bill Gates and Benjamin Franklin in their Kickstarter campaign, they’re quick to note how early mornings (including more time for breakfast) could put you in great company and add value to your life.

In fact, your $79 Kickstarter pledge will snag you one Ruggie alarm clock mat, a USB cable and a free eBook called “How to Wake Up Early and Build Successful Morning Routines.” Estimated delivery is September 2016 though, so you’re on your own with the smartphone alarm till then.

What do you think: Would an alarm clock mat make you get out of bed each day? Is this the greatest gadget ever? Tweet us @BritandCo.

Exenia Rocco
Exenia is a contributor at Brit + Co. When she's not writing witty articles, she can be found singing, dancing, or traveling. She considers herself a digital nomad and a fun-loving artistic soul.
Gadgets
Tech
Gadgets Kickstarter
More From Tech