Here’s Scientific Proof That a Hug Can Improve Your Mood 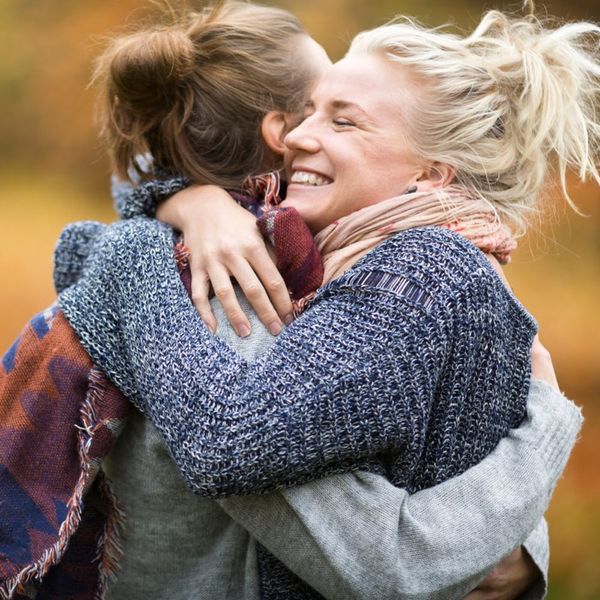 If you’re a hugger, you might find yourself regularly coming up against a lack of interest from people who aren’t as demonstrative with their feelings. Your natural instinct to give a friend, loved one, or even new acquaintance a squeeze every time you see them probably has the best of intentions — but not everyone is quite so touchy-feely. If this sounds all too familiar to you, we’re willing to be that you’ve learned not to take it too personally when it happens… But in your heart, you can’t help but wish that everyone were as into hugs as you are. We come bearing good, hug-worthy news.

While conventional wisdom has long told us that there’s not much wrong with hugging (in appropriate, consensual situations, of course), we finally have the scientific evidence we need to prove that it’s actually good for our health. According to an October 2018 study, interpersonal touching — more specifically, hugs — is associated with the kind of mood improvement that can be especially good for our mental and emotional well-being on conflict-heavy days. In the study, which was organized by professors at Carnegie Mellon University and the University of Pittsburgh, 406 participants were involved in daily reflective phone calls for two weeks. During these conversations, they were asked to talk about the interpersonal interactions they’d had throughout the day, as well as how much hugging they’d done and how it affected their mood. They were asked to note whether they’d eaten, engaged in leisure activities, done housework, or run errands with another person. Then, they were asked to rate their mood throughout the day on a numbered scale.

Most of the participants reported receiving a hug at least once over the two-week period of investigation. On days when this happened, they consistently reported more positive moods. There was also a significant relationship between conflict, hug, and mood — meaning that sharing a hug proved especially beneficial to moods on days when participants were dealing with more interpersonal stress and arguments. These positive vibes even continued into the following day. And guess what: All people thrived equally from hugs, regardless of gender! “Our results are consistent with the conclusion that both men and women may benefit equally from being hugged on days when conflict occurs,” the study’s authors confirm.

While this particular study didn’t dive especially deep into why hugs can be so effective at improving mood — particularly amid conflict — the authors’ prediction is what you might expect: “Interpersonal touch behaviors such as hugs may buffer against stressors such as conflict because they increase perceptions of social support availability by tangibly conveying care and empathy without communicating to receivers that the receivers are ineffective.” Basically, this is a fancy way to say that a hug is a loving gesture that often shows minimal judgment too.

If you’re a hugger, what you should take from this is that you’re seriously on to something. Spread that hug love when you can. And if you’re a person hesitant to accept them, you might want to consider the potential they have to improve your mood, even on hard days. After all, science proves it!