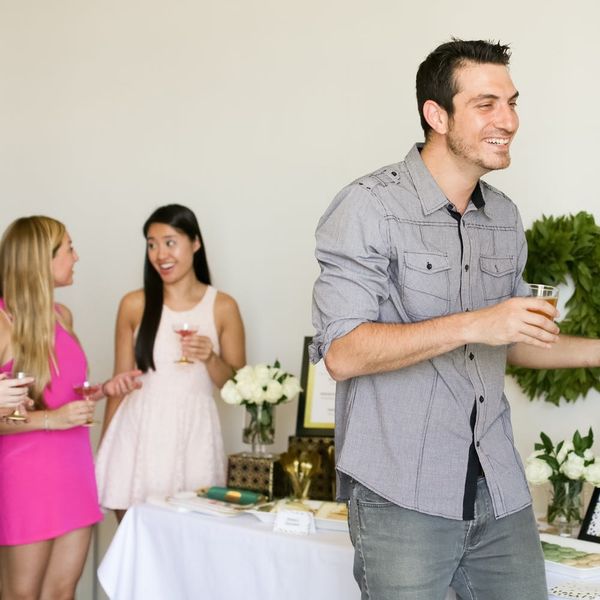 If you’re like most of us, the whole “let’s be friends” thing after the breakup with your ex probably hasn’t worked out so well. And, like most of us, you’re bound to have an awkward run-in with said ex sooner or later. Heard your ex is going to be at a party? Don’t panic, and definitely don’t bail. Here’s what to do (and, more importantly, what not to do) when seeing an ex is inevitable.

DO mentally prepare yourself. For anything. Your ex could have gotten a totally swoon-worthy ‘do that reminds you of Ryan Gosling during his Notebook days or Beyoncé at the Grammys. Or worse yet, your ex could be with another new squeeze. And trust us, you don’t want to be caught off guard when that happens.

DO take a moment to collect yourself. Breakups are hard — you’re allowed to be sad about them. You’re even allowed to wallow, but only temporarily, and definitely not in public. The last thing you want is to have a full-blown meltdown like one of those girls from The Bachelor who didn’t get a rose. Instead, take a minute to step outside, take a breather and collect your emotions before you get back in there and show that party who’s boss.

DO stay positive. You know what they say: Fake it ’til you make it. Even if it feels like your chest is caving in, your lungs are filling with quicksand and your heart has been shoved through a meat grinder, don’t forget to smile. You want to seem happy, not mopey. Just keep your head up and know that things *will* get better.

DO keep things short and simple. Though the two of you may have dated for months or even years, now is not the time to fill your ex in on every detail of your life. If you’re feeling up to it — and you’re on good terms — then say a quick hello. But keep the convo short and sweet.

DON’T pretend like you didn’t see him/her. Unless your current relationship status with your ex is icier than the make-believe kingdom of Arendelle, then completely ignoring your ex will just seem childish and immature. We’re not saying you two have to be BFFs; you just have to acknowledge the other’s presence — a friendly wave will suffice.

DON’T look like you’re trying too hard. Now is not the time to whip out your false eyelashes, platform wedges and metallic bodycon dress or skinny tie, patent leather oxfords and velvet blazer. You want to look put together, but not, like, Kardashian/Kanye put together. Remember, less is more.

DON’T try to make your ex jealous. Bringing a hot guy or girl as a plus-one or making out with a rando on the dance floor doesn’t exactly scream class. However, if a rebound is really what you need — if you’re really doing it for your own happiness and not to get revenge on your ex — then, by all means, you make out with that rando.

DON’T drown your sorrows in tequila (or any other liquor, for that matter). Sure, drinking your melancholy away may sound like a good idea at first, but did you really need that fourth tequila shot? Probably not. If you overindulge in the alcohol department, chances are you’ll be spending the rest of your night on the bathroom floor. Not cute. Instead, stay for a drink (read: ONE drink) and then make an early exit with your dignity — and liver — still intact.

DON’T hook up with him/her. We repeat, do not hook up with your ex. Much like the tequila, it might seem like a good idea at the time, but rest assured, come the next morning you’ll wake up with nothing but regret. Sure, old habits die hard, but if you’re ever going to move on you need to move forward, not back (into bed). Remember, nothing good happens after 2 AM.

How do you deal with seeing an ex? Tweet us your thoughts @BritandCo!