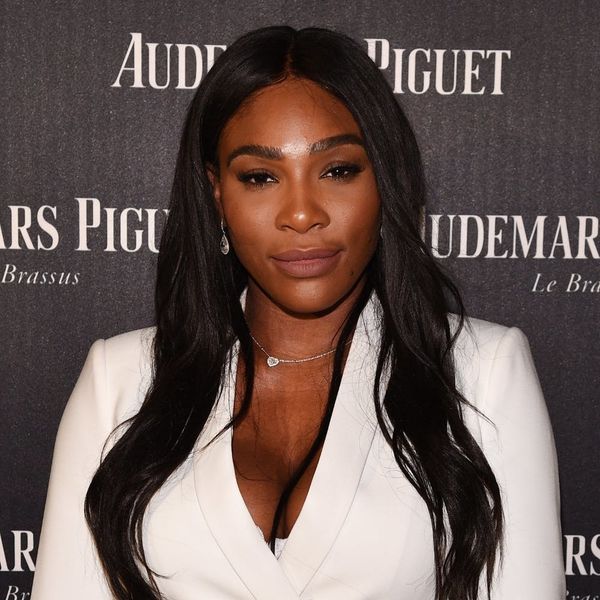 It may no longer shock us when Serena Williams dominates the court, but she totally took us by surprise when she announced her engagement to boyfriend and Reddit co-founder, Alexis Ohanian. And now she’s done it again, as she’s been spotted wearing her engagement ring, and despite the fact that celebs have been opting for (and upgrading to) whopper stones and settings, Serena’s may surprise you.

Even though Serena is one of the top tennis players of all time, snagging plump endorsement deals and jumping on various biz opportunities, AND despite the fact that Alexis is one of the folks behind the biggest sites online, Serena’s ring is quite modest — at least by celebrity standards.

Spending New Year’s in New Zealand, the pair were spotted at the airport on their way to jump on board a helicopter. Serena was looking as fab as always with a full-length gray coat over a simple white top and high-cut denim shorts with tennis shoes to match.

Newly engaged Serena Williams flashes her ring as she steps out with Reddit co-founder… https://t.co/0zXEKGtJEj pic.twitter.com/A3DFM1Fz85

And while she was no doubt looking fierce AF, it was her hand that caught folks’ attention. That’s because her new engagement ring was on her finger. Though we’re unable to see it closely or get any specific details, the one thing we can see is that it’s not big. At all.

In fact, it looks quite simple. But we bet up close, it’s a stunner!

Do you prefer big engagement rings or something more simple? Tweet us @BritandCo!

Desiree O
Desirée O is a ‘Professional Bohemian’ who loves anything and everything related to the arts, entertainment, and pop culture. She ADORES being a ‘Newsy’ for Brit + Co, covering all of the latest tidbits of awesomeness that you want to read about. When she’s not writing, she’s either making messy art, going on long adventurous walks with her camera, or poking around over at bohemianizm (http://www.bohemianizm.com/). You can find out about Desirée O and her work at http://DesireeO.com/ or follow her on Twitter @DesireeO.
Engagement Rings
Celebrity News
Engagement Rings