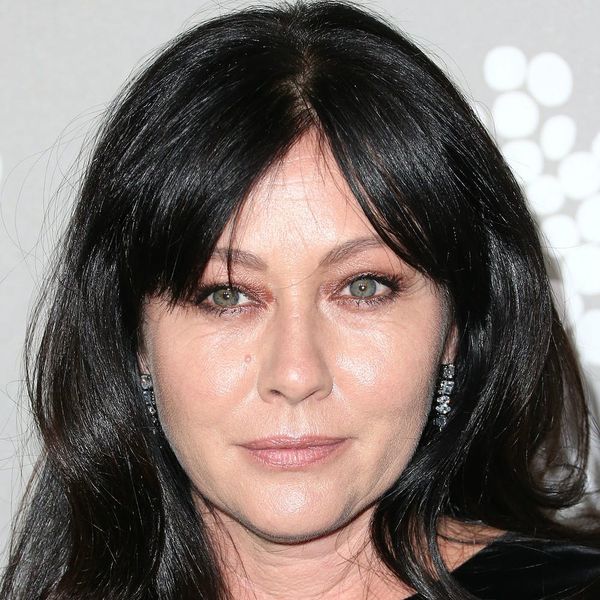 90210 (Brenda Walsh for life!) and Charmed favorite, Shannen Doherty, broke all of our collective hearts when she announced that she had been diagnosed with breast cancer a little over a year ago.

Since then, the star received a single mastectomy in May, and has recently begun undergoing chemotherapy treatments to treat her illness. While one might have expected her to do so privately, keeping her most vulnerable moments hidden away behind closed doors, Shannen has done just the opposite.

The incredibly brave star has made the decision to be open about her journey, sharing both her highs and lows on social media for the world to see and opening herself up to connection with others sharing many of her same struggles.

Most memorable was this shot she shared of herself gazing into the distance just moments after she had shaved her head.

“Step 6,” she wrote, a reference to the number of steps she went through that day to arrive at the starkly beautiful black and white pic.

Since then, we’ve seen her at her best, on days when she felt incredibly strong.

She was fierce, she was strong, she wasn't simple. She was crazy and sometimes she barely slept. She always had something to say. She had flaws and that was ok. And when she was down, she got right back up. She was a beast in her own way, but one idea described her best. She was unstoppable and she took anything she wanted with a smile. R.M. Drake. #cancersucks #warrior #fightlikeagirl

Quoting R.M. Drake, Shannen captioned the above, “She was fierce, she was strong, she wasn’t simple. She was crazy and sometimes she barely slept. She always had something to say. She had flaws and that was okay. And when she was down she got right back up. She was a beast in her own way, but one idea described her best. She was unstoppable and she took anything she wanted with a smile.”

We’ve also seen her on the days she didn’t feel quite so hot, more often than not accompanied by the ones who love her most. From her incredibly devoted husband, Kurt Iswarienko (who actually texted her, “Oh my God. You’re hot with no hair” *SWOON*), to gal pal Sarah Michelle Gellar (who posted her own tribute to Shannen in a truly awesome #wcw moment), Shannen’s friends and family have gathered around her to show their support, and none more so than her mother, Rosa.

“Step 1,” she captioned the above shot prior to undergoing the scissors.

Now, the star has taken time out to thank her mother in a post that truly had us in tears. Showcasing her curled up in her mother’s lap like a little girl as Rosa pokes her dimples, Shannen writes as follows.

Sometimes there's nothing like a mothers love to help get you thru. Thank you mom for always being there and being so strong for me. I love you. #mamarosa #cancersucks #fightlikeagirl

“There’s nothing quite like a mother’s love to get you through. Thank you mom for always being there and being so strong for me. I love you. #mamarosa #cancersucks #fightlikeagirl.”

WOW. Okay, we’re gonna need a second to recover. What an inspiring woman and family!

Are you touched by Shannen’s personal journey? Share with us over @BritandCo.

Nicole Briese
Nicole is the weekend editor for Brit + Co who loves bringing you all the latest buzz. When she's not busy typing away into the wee hours, you can usually find her canoodling with her fur babies, rooting around in a bookstore, or rocking out at a concert of some sort (Guns N' Roses forever!). Check out all her latest musings and past work at nicolebjean.com.
love
Celebrity News
love
More From Celebrity News