13 Dinner Recipes to Use Up That Bottle of Sherry 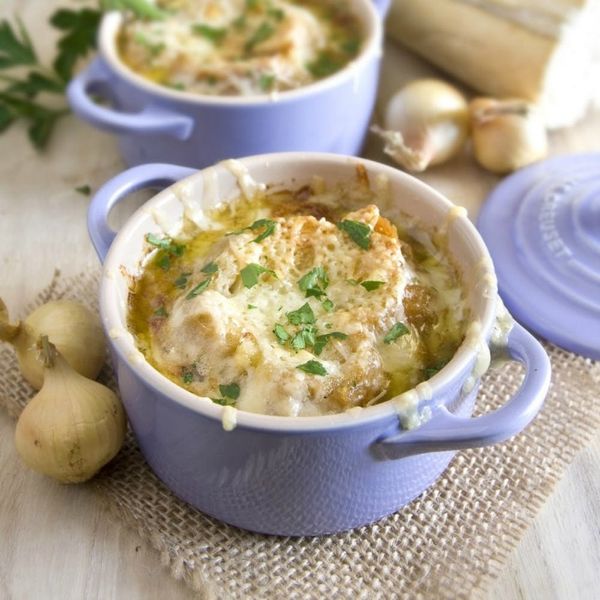 If you’re like us, there are at least a few jars and bottles in your cupboard that are full of ingredients you used for one recipe, then forgot about — none so old as that dusty bottle of sherry. But sherry has a complex, heady flavor that can add tons of dimension to soups, sauces, and slow-cooked beef recipes; and it’s not that hard to use it. Add a splash to your favorite wine sauces to enhance the flavor, or use it to deglaze the pan before you reserve drippings for homemade gravy. You can even just sip it from a glass (as long as you didn’t buy the cooking kind that has salt added). Or use up that lingering bottle with these 13 recipes.

If you’ve ever wondered what makes French onion soup taste so rich, one of its secret ingredients is sherry. Just a splash enhances the caramelized flavors in the onion, adding a little extra something that you can’t quite put your finger on, but makes you want to drink the broth straight from your bowl. (via Munchin With Munchkin)

Grilled cheese for grown ups is as simple as using goat cheese instead of American. Roasted beets sautéed in sherry give your sandwich great color and an earthy, sweet flavor. (via BS’ in the Kitchen)

An easy pan sauce can take a simple meal of sautéed chicken and turn it into a restaurant-quality dish. Earthy parsnips and apples balance out the meal. (via Jill Hough)

Short ribs can be tough, but they’re full of meaty flavor. The key to unlocking it is braising them, low and slow, in a savory liquid until tender. (via Flavor the Moments)

Chicken thighs are less expensive and easier to cook than chicken breasts — they almost never dry out. Add them to your recipe repertoire with this dish, made with a sauce so delicious you’ll want to serve it with plenty of crusty bread for dipping. (via Jo Cooks)

Sticky, salty, and sweet, chicken wings are the tastiest finger food you can have for dinner. Instead of just bottled barbecue sauce, this one adds in a mix of soy sauce, ginger, and sherry. (via Froment Free)

Everyone needs a go-to pork chop recipe on file. Five ingredients and 20 minutes is all you need to make this one yours. (via Baking Mischief)

Fire up your trusty skillet and get ready to make this one-pot meal. If ever there were a way to make chicken feel fancy, it’s this surprisingly quick dish. (via The Cookie Rookie)

This Spanish-inspired recipe is infused with sherry and white wine, which brings a pleasant acidity that cuts through the rich chorizo. Both help season the succulent but relatively mild shrimp. (via Taste and See)

Balance out a decadent cheddar soup by adding sweetness in the form of apples, then bring some heat to the pot with jalapeño. (via Seasoned Sprinkles)

Drenched in silky four-cheese sauce, this mushroom ravioli is the ultimate comfort food. Add some chicken and peas sautéed in sherry to make it even more delicious. (via Go Go Go Gourmet)

Treat your palate to a bowl of creamy lobster bisque. It tastes way better made from scratch than from a can, and it’s cheaper than ordering it at a restaurant. (via Garlic and Zest)
Justina Huddleston
Justina Huddleston is a food writer living in Los Angeles. When she's not busy writing, she spends her time in the kitchen creating both virtuous and decidedly junky vegan food. Buffalo chickpea pizza, anyone? She's also been known to eat a plain block of tofu or beans straight out of the can for lunch, but somehow those culinary adventures don't make it to her Instagram. You can follow Justina on Twitter or see what's cooking in her kitchen on her blog, A Life of Little Pleasures.
Dinner Recipes
Recipes
Dinner Recipes recipe roundup
The Conversation